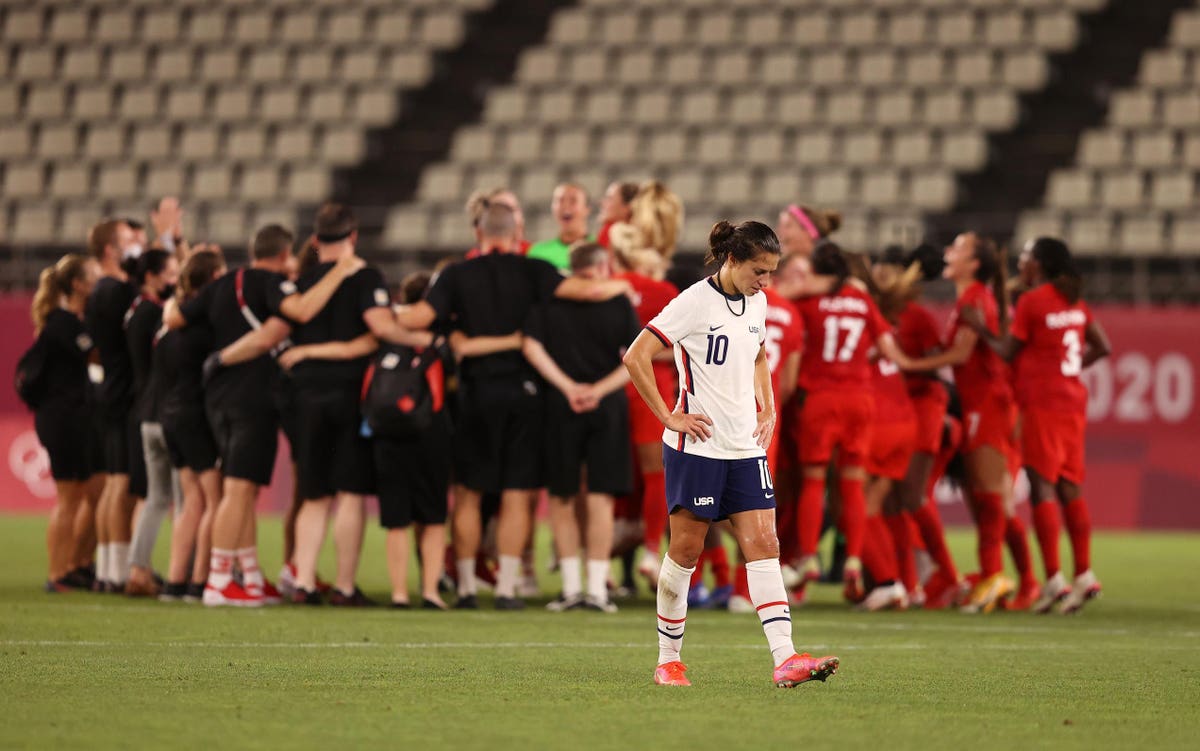 Canada sensationally eliminated the reigning world champions, the United States in the first women’s Olympic semi-final at the Tokyo 2020 Olympic Games to reach the Gold Medal Match for the first time in their history and leave Vlatko Andonovski’s side battling for Bronze.

A 74-minute penalty goal from Chelsea’s Jessie Fleming was enough for the Canadians to earn their first victory over their North American rivals since a 3-0 win at the 2001 Algarve Cup. 61 previous meeting between the two nations had resulted in 51 victories for the United States and only three defeats before today.

Following her appointment in October 2020, head coach Bev Preistman vowed that her ambition has to “change the color of the medal” for the Canadian women’s team who had won Bronze at both of the previous Olympic Games in 2012 and 2016. Victory today means she has achieved that goal by ensuring that her team will win at least Silver in Friday’s final in the National Stadium in Tokyo.

The 35-year-old, born in North-East England, previously served as assistant coach of the Canada women’s national team under compatriot John Herdman before taking up the same position with the England women’s national team in 2018. She will become the first English coach to lead a team into the Olympic Final in 73 years since George Raynor coached Sweden to the Gold Medal in the 1948 Games in London.

Defeat means the United States have once more failed in their quest to become the first women’s soccer team to win the Olympic title on the back of winning the FIFA World Cup. They were reigning Olympic champions when the won the FIFA Women’s World Cup in 1999 but have never won Olympic Gold immediately after becoming world champions, losing to Norway in the final of the Sydney 2000 Games and going out at the quarter-final stage on penalties to Sweden in 2016 after winning the 2015 Women’s World Cup.

Going into the Games with a 44-match undefeated record over the past three years, they have stuttered through the tournament, comprehensively beaten by Sweden in their opening match and only recording one outright victory, a 6-1 win over New Zealand, in the five matches they have played so far.

With an average age of just under 30, questions will once more be asked about the individuals selected for the United States squad and whether this Olympics will be the last major international tournament for several players. After the match, Megan Rapinoe gave a typically forthright assessment of the team’s performances at the Olympics stating that “the players have a lot to look at ourselves about. We need to perform better. Period.”

Asked if she believed the team played without joy during the Games, she said “I think football always needs joy, when the game is really played at its best is when you have it. I feel we haven’t been able to do that. Everything has just been a little bit of a struggle. I hope we find it. I certainly love playing with a big smile on my face. We have a lot to play for. There’s a medal on the line, that means everything, no matter what color it is”.