Canadian Photographer Arrested at Indigenous Protest Is Freed on Bail 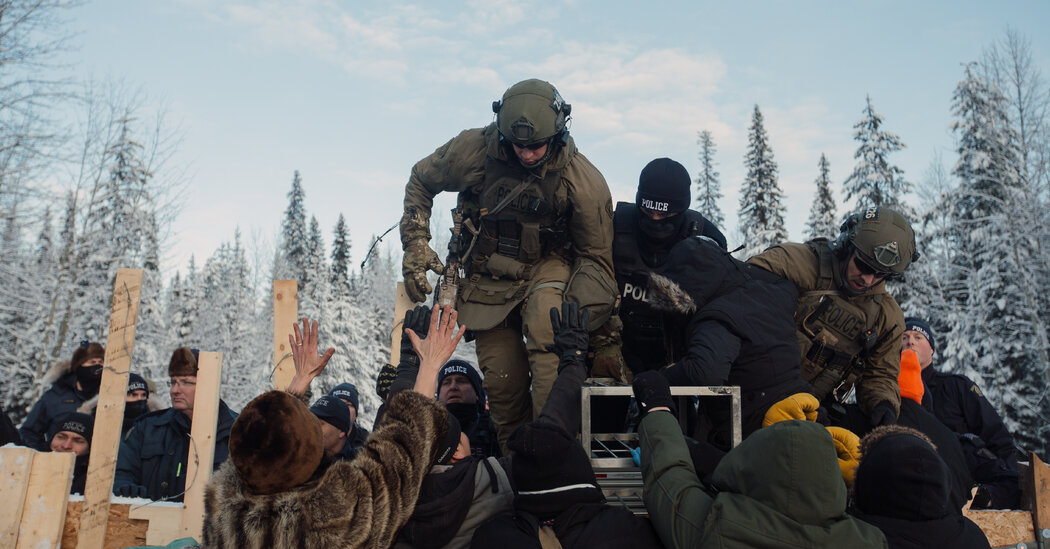 OTTAWA — A journalist arrested at an Indigenous protest against a pipeline last week in western Canada was released Monday on bail, but journalism groups in the country condemned the decision to continue with contempt charges against her.

The journalist, Amber Bracken, who is a photographer, and a filmmaker, Michael Toledano, were arrested Friday as they covered a protest by Indigenous Canadians against construction of a natural gas pipeline.

Heavily armed members of the Royal Canadian Mounted Police took them into custody along with 13 protesters, accusing them of violating an injunction granted to the company constructing the pipeline through a remote region of British Columbia to a ship terminal being developed by several large energy companies, including Shell, Petronas and PetroChina.

The arrests followed two recent court decisions that upheld the rights of journalists to work unimpeded at protests, particularly ones involving Indigenous people.

“I’m cognizant that the charges have not been dropped, and so, in that way, I think it’s still very much fasten your seatbelts,” said Brent Jolly, president of the Canadian Association of Journalists. “This ultimately has an effect on chilling media freedoms.”

David F. Sutherland, Ms. Bracken’s lawyer, said that while she had agreed as a condition of bail to follow the long list of rules laid out in the injunction meant to prevent actively obstructing construction, the photographer will not have to stay out of the exclusion zone set up by police, allowing her to continue her work.

Mr. Sutherland said that the submission to the court from the police made at the request of the pipeline company does not demonstrate that she violated the injunction. Nevertheless, she must appear again at a hearing on contempt of court charges on Feb. 14.

“There’s no allegation at all against Amber Bracken which would indicate a breach of the injunction,” Mr. Sutherland said. “We absolutely categorically deny any breach.”

Ms. Bracken, a freelance photographer, was on assignment for The Narwhal, an online magazine based in Toronto. Last year, she was recognized by the Canadian Association of Journalists with an award for pushing back at earlier attempts by the police to exclude journalists from reporting on demonstrations against the same pipeline. She reported on that dispute for The New York Times, among other publications.

Mr. Tolendano was at the site to make a documentary for some of the Wet’suwet’en First Nation who have established a checkpoint to keep pipeline workers off the disputed land.

The exact circumstances of the arrests remained unclear.

In a statement, the British Columbia division of the Mounted Police said that on a forest road near a drilling site for the pipeline, officers had found “obstructions, blockades, two building-like structures as well as a wood pile that was on fire.”

After the people inside the buildings were told come out or face arrest, “officers broke through the doors, entered the structures and arrests were made without incident,” the police said.

Jennifer Wickham, the producer of Mr. Tolendano’s film and a spokeswoman for the group at the checkpoint, said in a statement that the two journalists were in a “tiny house” with several of the Indigenous protesters “when police broke down the door with an ax and forced their way inside with guns drawn, attack dogs in tow, and assault rifles trained on the doors and windows.”

She said that the two journalists identified themselves as members of the media “and were clearly photographing the events, but were arrested nonetheless.”

The arrests were swiftly condemned by a variety of groups, including the Canadian Civil Liberties Association.

The remains of what are presumed to be Indigenous children have been discovered at the sites of defunct boarding schools in Canada. Here’s what you should know:

“The Canadian public has a right to know what is happening on the site, and journalists have the weighty responsibility to tell these stories,” Cara Zwibel, director of the fundamental freedoms program at the association, said in a statement. “Their arrest and ongoing detention have no place in a liberal democracy.”

While politicians in Canada cannot direct police investigations and activities, Marco Mendicino, who as federal minister of public safety oversees the mounted police, challenged the arrests in a series of Twitter posts.

“I am aware of and am concerned about the fact two journalists remain in custody under a civil enforcement proceeding,” he wrote, adding, “As the courts have held, it would be wrong for any journalist to be arrested and detained simply for doing their vital work on our behalf.”

This year, the Supreme Court of British Columbia has twice rebuked the Mounties for blocking journalists from covering protests against the logging of old-growth forests on Vancouver Island.

In 2019, three justices of the Court of Appeal of Newfoundland and Labrador unanimously reversed the conviction of Justin Brake, a Canadian journalist who was arrested in 2016 for violating an injunction against protests by Indigenous groups against a hydro electric dam project in Labrador. They found that injunctions restricting access to protest areas should not apply to journalists and emphasized in the decision the need for reporting on Indigenous issues.

While Canada’s Constitution guarantees freedom of expression, the laws governing the news media are not entirely clear, said Allan Hutchinson a professor at the Osgoode Hall Law School at York University in Toronto.

“We’ve had grave problems in trying to carve out where people can exercise that freedom of expression,” he said. “The prospects look reasonable that the court will side with media, but nothing is guaranteed in these classes.”