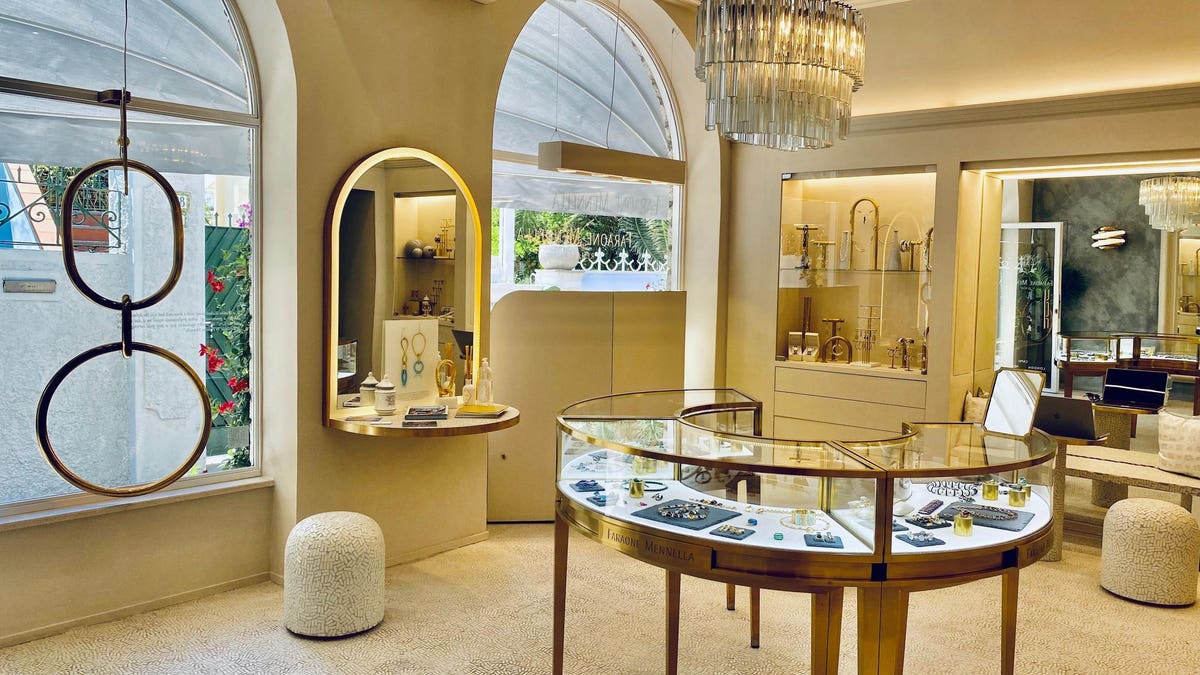 While many luxury brands have outposts on the Italian island of Capri, very few can boast the tiny hamlet as their flagship store. One who can is jewelry brand Faraone Mennella founded by the late Roberto Faraone Mennella and Amedeo Scognamiglio in 2001. The duo, who had known each other since their childhood growing up in the Naples region of Italy, launched overnight when their Stella earring was featured on Sex and The City, the cultural fashion Zeitgeist of the moment. Now twenty years and several boutiques later, the original Capri store has undergone a significant renovation to mark the 20th anniversary and steer the brand into the next twenty years.

Crucial to its popularity has been the idyllic island off the coast of Naples that both founders knew as kids. For Scognamiglio, who is helming the brand solo since Roberto’s passing June, 4 2020  due to Lymphoma, the location suits luxury retail today despite those questioning why he chose to invest and renovate during a pandemic. “Why would you want to open in a big city now? Capri is exactly what is happening in the business right now, being a luxury destination, also St. Tropez, Porto Cervo, St Barth’s, or Mykonos for example. Luxury happens in small islands frequented by yachts. It’s the experience of shopping on a vacation and feeling safe,” he asserts adding, “You want to open in a city right now? It’s a more difficult proposition to think of the standard luxury sale going back into high-end department stores in big bustling cities, crushed into an elevator with a million people. The convenience of going to local stores was substituted with digital sales, so they are now aligned. When it’s not about the convenience, it must be about the experience.”

Embarking on a renovation to mark the 20th anniversary milestone was bittersweet as Roberto was a partner in business and in life and since his passing, both were challenged by the late designer’s family. But also, because Roberto was the interior designer for the shops and offices, Scognamiglio wanted to preserve this part of his legacy. “The idea of changing what he had done was intimidating,” he confessed. Enter childhood friend and interior designer Maria Laura Rossiello-Irvine of Studio Irvine. Rossiello-Irvine had experienced a similar loss when her partner and husband James Irvine passed away. Through sharing their experiences, he realized that moving forward meant evolving the aesthetic of the flagship, signaling a strong continuation of the brand under solo leadership. “It’s like losing it all. Having gone through that before me, she helped me cope and understand I didn’t have to give up,” he concedes.

Roberto’s Faraone Mennella touch meant a mix of old-world style: think antique chairs, 1940s light fixtures, chandeliers and Goossens coffee tables blended in a minimal approach with signature light grey walls and sleek visuals. Rossiello-Irvine respected that vision but adds inspiration from some of the jewelry. The Stella earring becomes a super-sized hanging sculpture, the Lizzy ring a giant light wall fixture and gold-tones of the jewelry pair with tile mosaics, organic clay and brass elements centered around a stage-like arena display case. The result is more art installation rather than jewelry store. The duo also co-owned Amedeo, a modern cameo brand that has a store on the island that was also updated by Rossiello-Irvine. The logistics of the construction happen in the off-season and given the transport constraints to and on the island, shortage of workers and municipal restrictions, any construction project is a feat on the island, adding to its mystique.

Capri for the uninitiated is full of experience. Last year, it was frequented by Europeans and Italian society but this year, the wealthy Americans have returned (though Russian oligarchs and Arab royals can’t come yet.) The season, mid-March to mid-October, is naturally most populous the three months of summer. “Summer 2020 was obviously unusual, due to the absence of North American and Middle Eastern visitors, but not surprisingly the island was full of Europeans who couldn’t travel abroad for the same reasons,” he recalls. “2021 started with a bang; the island is fully booked—hotels to beach clubs—and the international jet set is back. The consumer behavior this summer is clearly ‘doped’ by an unprecedent joy for life after Covid-19 restrictions.” He noted than even though the season is still underway, there is already a 20 percent increase in sales comparing to 2019 with a significant higher individual receipt average.

With the Americans returning it begs comparison to the New York store located on Lexington Avenue. The demographic is the same as New York customers vacation in Capri (more so than Porto Cervo, perhaps thanks to Jackie Kennedy Onassis’ endorsement of the island in the Sixties). While the price point and collection doesn’t change, attitudes do. “The staggering difference is the relaxed approach, the shopping behavior, and spending choice. In New York City, we see more self-purchases, less ‘husbands.’ In Capri it’s a family holiday, so husbands of all kinds—billionaires, sheikhs, or celebrities—enjoy shopping with their wives, patiently in a relaxed mood,” he says of the two shops. He adds that the spending power is higher in Capri, in NYC the relationship with clients is based on multiple visits, special commissions and special occasions. “Capri is a one-time shot for all sales,” he says. The brand also has stores in London and Porto Cervo that have been closed since the pandemic started.

It also boasts paparazzi-worthy clients. This summer reunited couple of the moment ‘Bennifer’ came in. JLo posed for selfies and tried on jewelry (she also made a purchase) while Affleck asked questions the gemstones. Fans outside gathered and shot videos. Nicky Hilton stopped by earlier to pick up a piece on loan to promote, wearing it to the recent LUISAVIAROMA X UNICEF gala. For Scognamiglio, its par for the course. Since its inception, the store has welcomed bold face names such as HRH Princess Fyrial of Jordan, Pilar Crespi, Christine Schwartzman, Lady Carol Bamford, Italian movie stars Luisa Ranieri and Luca Zingaretti, young Princesses from the Al Thani and Maktoum family along with Robert and Hope Smith. He recently made a custom-made gold encrusted, sword-bearing bejeweled cane for the American philanthropist that was nursing a temporary injury.

But celebrity culture isn’t the only type welcome at the Faraone Mennella boutique. Scognamiglio is eager to give exposure to authors. He hosted a book release event this past week, inviting Italian author, tv host, movie director and social activist Pierfrancesco Diliberto aka’ PIF’ to discuss his latest book about two elderly Sicilian women fighting against the Mafia. The talk was moderated by Italian tv journalist Mariolina Sattanino.

“We placed the author and journalist by the front window and a speaker in the street, so people could also listen and watch from outside the shop. We didn’t realize this was such a great idea, until we saw the street crowded with fans and people interested by the fascinating and compelling story. Mission accomplished.” He plans to organize another one at the end of August with more scheduled for 2022.

In a serendipitous full-circle moment, the show that put the brand on the map is currently filming a 2021 reboot. This time, Molly Rogers, the former assistant of Patricia Field who pulled the earrings 20 years ago, is now costume designer of the show.  She has selected from the current collection. “It’s exciting and emotional as Faraone Mennella is forever linked to the show. I would be also happy to see other young designers find success through the show as we did.”

Defining success has like everything else, has changed a lot in the last 20 years such as the internet evolution and the advent of social media. Scognamiglio is weighing options on the next stage. “I have been approached by few investors from the private equity world, interested in scaling our history, talent and success into global brands. As the sole owner of both brands, I am now considering options best for each brand, as if they were Roberto’s and my children,” he says.

Faraone Mennella is the high luxury jewelry brand expanding in home with a collaboration with Studio Irvine for lighting and interior design objects. AMEDEO is handcrafted jewelry fully invested in the men’s accessories world too, with potential extension into ‘hype’ fashion. Each brand is opening a boutique in Dubai with the Majid Al Futtaim group, and a Faraone Mennella boutique in Milan will open in 2022.  According to Scognamiglio the trajectory on course. “It’s now time, after 20 years, to scale the business to the highest level.”