Charged With Treason, a Genocide Survivor Opts to Fight, Not Flee 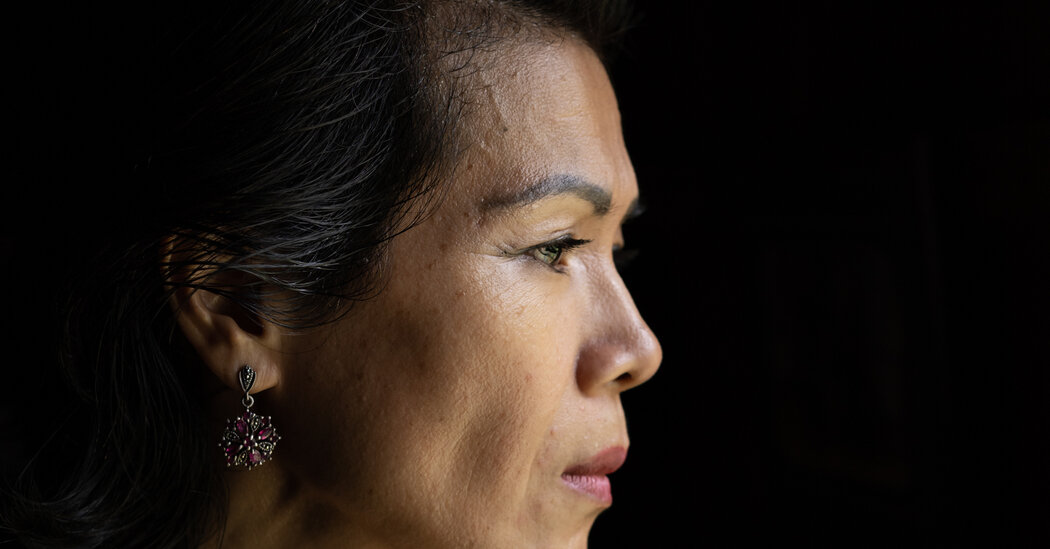 BANGKOK — Only a small child when the Khmer Rouge seized power in 1975 and soon made her an orphan, Theary Seng has two enduring memories from that time in Cambodia’s tortured history.

In one, she had fallen asleep in the arms of her mother only to wake up to find her gone. “It was my first spiritual experience,” she said, “when I knew without anyone telling me that my mother was not on this earth.”

The other is a sensory memory.

“I remember the stink of human flesh, very, very clearly,” she said. “That’s a personal memory, the stench of death. I was 7 years old. My job was to pick up cow manure for fertilizer. I would wander the fields, and the fields were just covered with graves.”

Four decades later, Ms. Theary Seng, a human rights lawyer who now holds an American passport, is back in Cambodia and confronting a new ordeal: She has been charged with treason.

She returned to Cambodia in 2004 to help build democracy in her wounded country, becoming an irritant to the strongman, Prime Minister Hun Sen, who considers human rights advocates like her as adversaries.

Last November, she found herself on a list of some 130 government opponents and critics who were facing a mass political trial, part of a drive by the prime minister to crush resistance and secure his one-man rule.

The charges against her, “conspiracy to commit treason” and “incitement to create social disorder,” which carry up to 12 years in prison, are “absurd,” she said. “Blatantly, on their face, they are baseless and not based in law or fact.”

In a show of determination and defiance, one of the first things Ms. Theary Seng did when she learned of the charges against her was to lop off her hair.

She used a large pair of green-handled scissors and livestreamed her gesture in a video broadcast on Radio Free Asia. “I know that they will detain me, so I am cutting my hair short because I’m afraid of the lice in prison,” she declared.

For the nine months since then, Ms. Theary Seng, 50, has lived at home on the outskirts of Cambodia’s capital, Phnom Penh, in a torment of uncertainty, without word on when her case will be heard even as the trial proceeds with some of the other defendants.

A flare-up of Covid in Cambodian jails has added another layer of fear about what detention could mean.

Her haircut was a flamboyant gesture, but also a serious assertion that she had no intention of using her American passport to flee, as the government might have hoped she would.

“I’m not going to be driven away from my homeland in the way I was driven away as a refugee,” she said.

As she describes herself in the title of her autobiography, Ms. Theary Seng is a “daughter of the killing fields” who survived the four-year genocide at the hands of the communist Khmer Rouge that took the lives of perhaps one-fourth of the country’s population in the late 1970s, including her parents.

In 1979, at the age of 7, she made a dangerous journey with several relatives across the border into Thailand. After a year in a refugee camp, her family was taken in by a Christian congregation in Grand Rapids, Mich.

She would later graduate from Georgetown’s School of Foreign Service and go on to earn a law degree from the University of Michigan.

And then, 17 years ago, like a small number of other idealistic refugees, she went back to Cambodia to take part in a revival of its civic life, becoming a leading social justice advocate.

Her goal, she said, was “to stem Cambodia’s complete plunge into autocracy” by publicizing and agitating against abuses of political and human rights. In addition, she assisted potential witnesses at a trial of Khmer Rouge leaders, where she also testified as a victim.

“There was such high hope when I entered civil society,” she said.

Staying to fight what she called a political struggle rather than a legal process was a matter of principle — and something she has long been preparing for.

“I don’t have a family, don’t have a husband or children that they could threaten, and I don’t have private property,” she said. “I’ve made a deliberate choice that if I continue to work in human rights and defend human rights, I’m going to stay unencumbered and free.”

The U.S. State Department has criticized the trial, saying, “We urge Cambodia to drop these baseless charges against human rights defenders.”

Both the United States Embassy and the American Bar Association have said they would send observers if Ms. Theary Seng is called into a courtroom.

“Theary has been a courageous champion for democracy and social justice in Cambodia for many years,” said John D. Ciorciari, an associate professor of international policy at the University of Michigan and an expert on Cambodia. “As government crackdowns have squeezed out space for democratic political dissent, she has stood bravely against authoritarianism.”

In justifying the arrests and its broader crackdown on the opposition, the Cambodian government appears to be claiming that its critics are part of a coordinated effort to overthrow the government.

The Asia Pacific director for Amnesty International, Yamini Mishra, said in a January statement that the government’s “onslaught of cases is the culmination of a relentless campaign of persecution against Cambodia’s political opposition and other dissenting voices.”

The challenges Ms. Theary Seng now faces after that initially hopeful journey home have brought her full circle from the ordeals of her childhood.

Too young to understand or remember a great deal of what she lived through, she said much of her autobiographical account was drawn from many hours of interviews with family members.

She said the two horrific memories that have stuck with her were mostly suppressed until her teenage years.

“Living through genocide was catching up with me, and I was chronically suicidal in high school,” she said. “What saved me was calligraphy. I calligraphied the whole Book of Psalms. I had this pile of parchment.”

The psalms were more than poetry to her. At Millbrook Christian Reformed Church in Grand Rapids, she became a committed Christian.

“I’m culturally Buddhist,” she said. “I have no problem respecting and attending Buddhist ceremonies. But my belief system is Judeo-Christian.”

As she awaits the government’s next move, it’s not calligraphy but punctuation that is helping her deal with the stress of the unknown.

She is correcting a translation of the Bible in Khmer, a language that is written without punctuation or spaces between words. She is improving what she says are mistranslations, and much of her project involves simply inserting commas.

In her own writing, she concluded her autobiography with what she describes as “one of the most surreal events of a lifetime,” an encounter with the Khmer Rouge leader she holds responsible for the deaths of her parents.

In the remote town of Pailin in 2002, before she returned to Cambodia to stay, she visited Khieu Samphan, who was later convicted of genocide in a U.N.-backed tribunal.

“I stood face to face with evil incarnate, my parents’ murderer,” she wrote. “Instead of revulsion, a perverse sense of awe initially captured my emotions — for evil was not mad, but charming, gracious and grandfatherly.”

They had what she calls “a polite hour-and-10-minute conversation,” in which Mr. Khieu Samphan trotted out his rote defense that he had no idea what was going on under his leadership.

“I can honestly say I felt no anger towards him, and I was surprised at how calm I was,” she wrote. But later she found herself “amazed, time and time again, at Khieu Samphan’s ability to live with himself.”

Mr. Khieu Samphan is now the last living leader of the Khmer Rouge, and his pro forma appeal of his conviction and life sentence is the last major order of business of the long-running tribunal.

“We live in a sea of abuses, so the tribunal is not even on our radar,” Ms. Theary Seng said, as Cambodia struggles through an entirely new set of political traumas nearly half a century after the genocide she managed to escape.

This time, she is determined to stay.

“I’ve been a rights advocate all my adult life,” she said. “I wouldn’t just step away from it now. All my years of human rights training would be null and void if I didn’t stay and fight.”