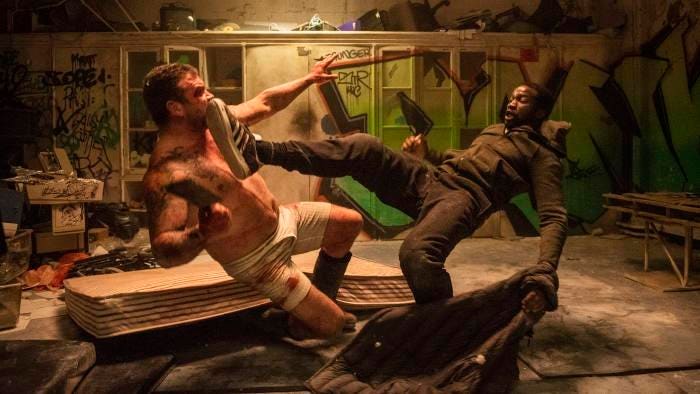 Gangs of London, the British crime-action series, follows a variety of present day gangs in modern London. The series boasts a talented cast, excellent direction, and some exception cinematography—in addition to setting itself further apart by some of the greatest action sequences in modern TV history. Yet again of course it’s a stunning crime drama, with talent behind it like showrunner Gareth Evans (of The Raid and The Raid 2, two of contemporary action cinema’s shining stars) and Corin Hardy (The Hallow is a modern eco-horror masterpiece). I sat down with Corin Hardy to chat the series, it’s stunning action sequences, and more.

The series is a format jump for the director, whose heretofore experience has been in features. I first asked what provoked the jump. “I guess Gareth Evans is what attached me to the project” Corin said.

“Gareth and I had been mutual admirers of each other’s work, you know, how lovers of genre kind of tend to gravitate together and you can mutually see into each other’s work. We contacted each other and I was picking his brain for when I was putting together The Crow because, I thought, he’s become a sort of master of action. I was aware if I was going to bring The Crow to life it needed to be next level, so I was talking to Gareth and he mentioned Gangs of London. This is about three years ago and he asked me if I’d be part of it.”

It wasn’t all easy street then, however, with schedule commitments that impeded an easy path forward:

“Back then I wasn’t able to, and I became available just when it was coming together. They asked me to do an episode. I’d been holding off from television for quite some time as someone who, I don’t know, feels much closer to cinema and feature films. I was nervous… could I be allowed to pull off something cinematic on a smaller screen, on TV? Obviously, there’s been a huge surge in the last five to 10 years of cinematic shows, so I thought I’d maybe use it as a testing ground to see, and because it was Gareth Evans involved and I knew his aesthetic was similar to mine, I thought that this would be a good start.”

I asked if the switch to TV provoked any specific differences in how he approached the project. “I think the thing is… you’re telling a story, and our mission is to tell a story as cinematically as possible, and bring the feel of cinema in all of its non-pretentious, you know, ambitions and scale and visual qualities that that you sometimes get on television these days (but not super often). And on the one hand, that is a process that has, you know, exactly the same processes, but I guess what struck me when I started to do multiple episodes. Gangs of London isn’t quite a conventional show in a sort of American TV way of making shows.

I came on to do an episode that became a block of three episodes and then was asked back to do the final episode, and then worked a little bit and just kept working on the show until it was finished. [I was] then got asked to do Season Two, so it has taken now quite a few years. What dawned on me in that process was, whereas with films you know either create it yourself or work with a writer, prep it, shoot it, edit it, finish it, with a TV show like this I was first of all brought on to continue telling the story that Gareth had set up in the first episode or two. You’re kind of continuing on already, you know, characters and storylines and relationships and backgrounds that have already been set up. It was a quite a different experience.”

Of course, in a show like Gangs of London action sequences are important. I asked what it was like filming the series’ epic action sequences. “It was a real high bar, a real ambition which was exciting for me knowing that Gareth was creating the show, and had designed a certain amount of action for the show. To then get involved and take the reins and do my own action within it… I was excited to put my stamp on it, and what I’m doing now in season two.”

The balance that we faced really was it couldn’t just exist as an action show without the kind of complex story, complex characters and emotional family crime drama going on at the ground of it. And yet it also wouldn’t have been as unique if it didn’t have that ambitious action that we tried to balance throughout so that you’re constantly kept on edge. We wanted it to feel as dangerous as possible. You never knew who was safe. And [we wanted] to hopefully thrill you with these sometimes unconventional and unexpected bursts of brutal fury and inventive action as well, because we wanted to try and be quite creative and inventive with all the sequences so you’re not seeing things you’d seen before.