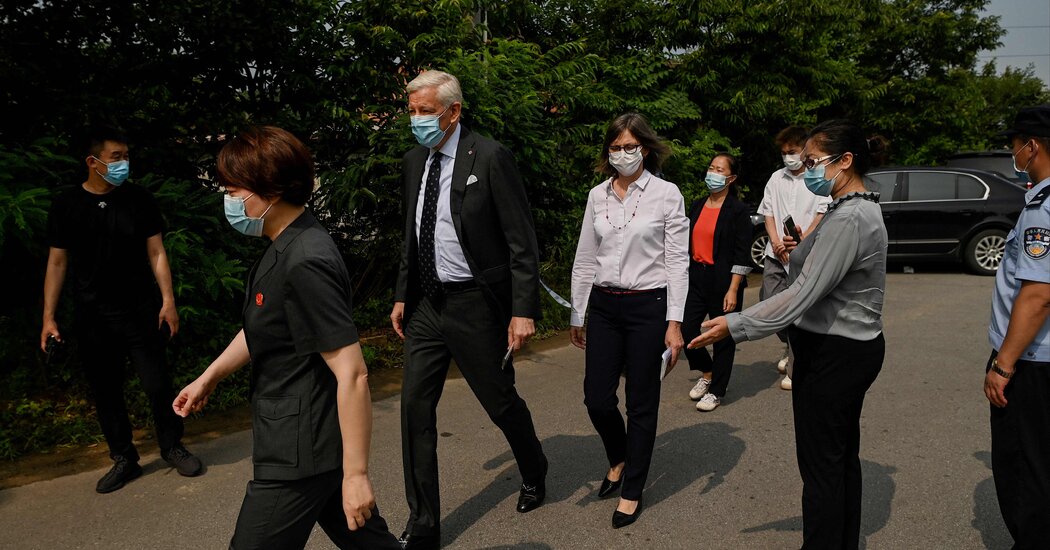 A court in China sentenced a Canadian businessman, Michael Spavor, to 11 years in prison after declaring him guilty of spying on Wednesday, deepening a split with Canada, which has condemned the case as political hostage-taking.

Mr. Spavor has the right to appeal the judgment imposed by a court in Dandong, a northeast Chinese city next to North Korea, where Mr. Spavor had often done business. But Chinese courts rarely overturn criminal judgments, and his fate could rest on deal-making among Beijing, Ottawa and Washington at a time when Beijing’s relations with Western powers are particularly tense.

The sentencing suggests that a court in Beijing is likely to announce a similar guilty judgment soon in a parallel spying case against another Canadian, Michael Kovrig, a former diplomat arrested about the same time as Mr. Spavor, in late 2018. The detentions occurred less than two weeks after the police in Vancouver detained a Chinese telecom executive, Meng Wanzhou, at the request of American prosecutors.

Ms. Meng remains on bail in Vancouver and has been fighting extradition to the United States, where she faces fraud charges linked to her role as the chief financial officer of the Chinese tech giant Huawei. Mr. Spavor’s conviction came amid closing arguments at the Supreme Court of British Columbia over whether Ms. Meng can be extradited.

The detentions of the two Michaels and Ms. Meng have opened a rancorous rift between Beijing and Ottawa and have added to the growing tensions between China and Canada’s democratic allies.

The sentence will fuel anger in Canada, where public attitudes toward the Chinese government have hardened over the prosecution of the two Canadians. In particular, many critics have contrasted the harsh conditions the Canadians have faced with Ms. Meng’s luxurious lifestyle.

The Canadians have been held in secret jails for more than two years, cut off from their families and with limited legal and consular access. The two were tried in short and opaque trials in March. Ms. Meng, meanwhile, has been out on a bail of 10 million Canadian dollars in a seven-room mansion in a rarefied Vancouver neighborhood, where she has had private painting lessons and massages. She wears a GPS tracker on her left ankle and has been able to move around Vancouver.

Chinese officials have accused Canada of entrapping Ms. Meng and have denied that Mr. Spavor and Mr. Kovrig are being kept as hostages to pressure Ottawa to let Ms. Meng return to China.

“This is nothing short of a political incident in which Canada played a very disgraceful role as an accomplice,” a Chinese Foreign Ministry spokeswoman, Hua Chunying, said in March about Ms. Meng’s case. “We urge the Canadian side to immediately release Ms. Meng Wanzhou.”

But the Canadian prime minister, Justin Trudeau, has said that Mr. Spavor and Mr. Kovrig were arrested on “trumped-up charges” as “an attempt to try and pressure us to release the executive,” and he has defended Ms. Meng’s detention as simply an application of the rule of law and Canadian extradition treaty obligations with the United States.

The two Canadians faced trial in March, and diplomats from Canada and other supportive governments were excluded from attending the hearings.

Another Canadian caught in the tensions, Robert Lloyd Schellenberg, was initially sentenced to 15 years in prison for methamphetamine trafficking. But in 2019 he was handed a death sentence in a one-day retrial, one month after the Canadian authorities arrested Ms. Meng. On Tuesday, a Chinese court upheld the death sentence.

In 2018, Hu Xijin, the editor of the Communist Party-run Global Times newspaper, warned that if Ms. Meng were extradited to the United States, “China’s revenge will be far worse than detaining a Canadian.”

Ties between Canada and China have soured since the 2018 detentions, reflecting Canadian anger over China’s early mishandling of the coronavirus outbreak and its sweeping crackdown on pro-democracy forces in Hong Kong, a former British colony that has been the source of many migrants leaving for Canada.

The two Canadians were both expatriates using their expertise in Asia when they were bundled away by Chinese state security officers. Mr. Kovrig had worked since 2017 as a senior adviser for the International Crisis Group, a nonprofit organization that provides analysis and advice on conflicts across the world, including China and North Korea.

Mr. Spavor who speaks fluent Korean, including the distinctive dialect of the North, promoted cultural tours and business contacts with North Korea. He won passing celebrity for helping to organize visits to North Korea in 2013 and 2014 by Dennis Rodman, the flamboyant former basketball star.

Mr. Kovrig has been kept so isolated in a detention center that he did not know details of the coronavirus pandemic until October, when Canadian diplomats informed him during a virtual visit, his wife, Vina Nadjibulla, has said.

The sentencing announcement did not reveal details of the accusations against Mr. Kovrig or Mr. Spavor. A report issued in 2019 by a news service for the Chinese Communist Party’s law-and-order committee said that Mr. Spavor had been a source for Mr. Kovrig, who was a prominent expert on North Korea, the South China Sea and other regional trouble spots that involve China. The families of both men have vigorously maintained that they are innocent.

Any hopes of early release for Mr. Kovrig and Mr. Spavor may rest on negotiations between Beijing and Washington. Western governments — including Australia, Britain, France and Germany — have voiced anger about China’s treatment of the two Canadians. But the voice that matters most is President Biden, who has said he would seek to secure their release.

“Human beings are not bartering chips,” Mr. Biden said in February, after talks with Mr. Trudeau. “We’re going to work together until we get their safe return.”

But China’s top leader, Xi Jinping, appears unlikely to offer concessions on the Canadians without some compromise and, ultimately, the release of Ms. Meng. The fraud charges against her relate to Huawei’s dealings with Iran, which officials in Washington have said tried to evade United States sanctions.