Chronicling a Day in Kabul as Taliban Cement Their Rule 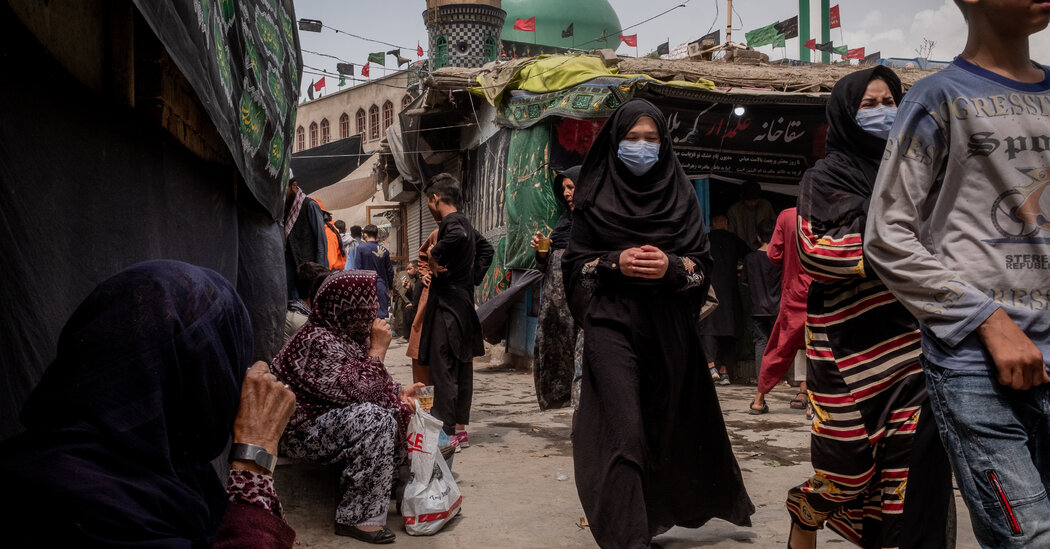 Kabul was many things on Thursday. The chaos at the airport was matched by calm in other pockets of the city. Some businesses resumed work, and many people were trying to get on with their lives. Others were in hiding, afraid for theirs. Women were scarce. There were signs of some Taliban restraint, but also clear evidence that its members patrolling the streets were not afraid to wield force.

Aside from the vicinity of the airport — which remained a scene of mass desperation and danger — on a drive around Kabul on Thursday morning, the hum of the city had largely returned.

Markets were bustling, and traffic was jammed.

On the north bank of the Kabul River, about two dozen shirtless young men were preparing to engage in a ritual of self-flagellation. They were commemorating Ashura, a holy day that — although peacefully observed by millions of Shiite Muslims across the world — has in some parts of the Middle East been wracked by violence, with attacks by extremists bent on stoking sectarian tensions.

In Afghanistan, those attacks have targeted the predominantly Shia Hazara minority.

The youngest of the group on the Kabul River, a native of Bamiyan Province who identified himself as Mahdi, was just 12. He called an older attendant over and checked the blades on his Teekh, a set of five chains with knives on the edges, attached to a handle that people whip themselves with in the ceremony.

“OK, they’re nice and sharp — good work,” he said. “I am not afraid of the Taliban. They have no business with me — why would they harm me?”

While Afghanistan has been beset by its own suffering in recent years, the bloodletting is meant to pay tribute to a fight centuries ago: In the year 680 in what is now the Iraqi city Karbala, the army of Yazid slaughtered Hussein, a grandson of the Prophet Muhammad, and cut off his head.

The Taliban are known for their uncompromising and harsh interpretation of Islam, and brutally persecuted the Hazara when in power from 1996 to 2001 — including a massacre of an estimated 2,000 people in 1998. But on Thursday they offered protection so that the ceremony could take place in safety.

Nearby, from the shadow of a drinks stall wrapped in black cloth and ornate with green and red flags, three Taliban members watched placidly.

Their commander, a turbaned man named Ahmad Zia, his beard dyed pitch-black, did not have an assault rifle slung around his shoulder — an oddity among the thousands of Taliban fighters who have flooded the city since Sunday.

Calm and with a swagger easily recognized as coming from the country’s south, he was chatting away with a few younger bystanders.

“I’ve been with the Mujahedeen for the last 12 years. Three days ago, I arrived from Helmand Province, I am from Musa Qala myself,” he said, referring to a district long infamous for being the Taliban’s headquarters in the country. “We are here to provide security 24 hours a day. People can carry on with their lives now.”

That sentiment was echoed at the entrance of a nearby mosque.

Nooria Jaan, a 30-year-old housewife, had come to the center of the city to observe the Ashura commemorations.

“I’m really happy right now,” she said. “This year Ashura is really peaceful. The criminals have disappeared overnight. There is no more crime.”

But later that afternoon in another part of town, the loud burst of machine-gun fire pierced the quiet.

A group of young men had tried to raise the tricolor flag of the ousted Afghan government. Their efforts atop a hill were violently broken up by Taliban foot soldiers, who let loose a volley of gunfire.

Three people had been shot.

One of the wounded sat in the passenger seat of a gray Toyota Corolla, its windows shattered from the bullet impact.

Another injured protester staggered down the hill, blood dripping from his hair and down his neck.

“The end of a Taliban rifle” he said, relating how he had been beaten.

As darkness fell over the city, sporadic gunfire continued.