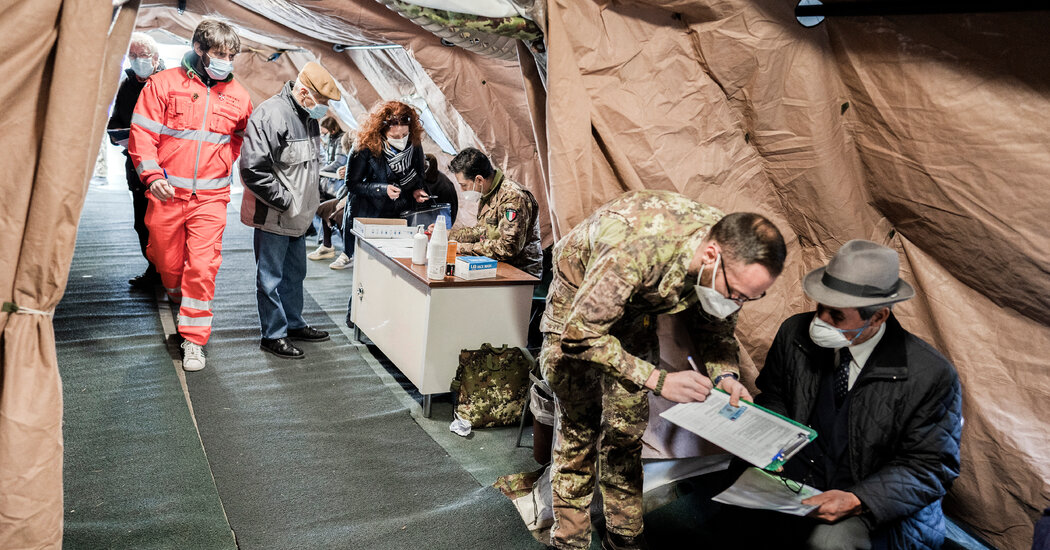 When the pandemic began, global health officials feared that the vulnerabilities of Africa would lead to devastation. More than a year later, the rates of illness and death from Covid in Africa appear to be lower than in the rest of the world, upending scientists’ expectations.

But if the virus begins to spread more rapidly on the continent, as it has in other regions, new findings suggest that the death toll could worsen.

People in Africa who become critically ill from Covid-19 are more likely to die than patients in other parts of the world, according to a report published on Thursday in the medical journal The Lancet.

The report, based on data from 64 hospitals in 10 countries, is the first broad look at what happens to critically ill Covid patients in Africa, the authors say. The increased risk of death applies only to those who become severely ill.

Among 3,077 critically ill patients admitted to the African hospitals, 48.2 percent died within 30 days, compared with a global average of 31.5 percent, the Lancet study found.

The study was observational, meaning that the researchers followed the patients’ progress, but did not experiment with treatments.

For Africa as a whole, the death rate among severely ill Covid patients may be even higher than it was in the study, the researchers said, because much of their information came from relatively well-equipped hospitals, and 36 percent of those facilities were in South Africa and Egypt, which have better resources than many other African countries. In addition, the patients in the study, with an average age of 56, were younger than many other critically ill Covid patients, indicating that death rates outside the study could be higher.

Reliable data on a country’s deaths and their causes have been hard to come by. As the coronavirus pandemic swept across the world in 2020, it has became increasingly evident that in a majority of countries on the African continent, most deaths are never formally registered.

The other eight countries in the study were Ethiopia, Ghana, Kenya, Libya, Malawi, Mozambique, Niger and Nigeria. Leaders of 16 other African nations had also agreed to participate, but ultimately did not.

Reasons for the higher death rates include a lack of resources such as surge capacity in intensive care units, equipment to measure patients’ oxygen levels, dialysis machines and so-called ECMO devices to pump oxygen into the bloodstream of patients whose lungs become so impaired that even a ventilator is not enough to keep them alive.

But there was also an apparent failure to use resources that were available, the authors of the study suggested. Proning — turning patients onto their stomachs to help them breathe — was underused, performed for only about a sixth of the patients who needed it.

The slow introduction of vaccines across the continent has underscored global problems of vaccine inequality. Just over 24 million vaccines have been administered in Africa, according to the Africa C.D.C., with just 1.42 percent of the population fully vaccinated. In the United States, about 126.6 million people are fully vaccinated and more than 60 percent of adults have received at least one shot.

Facing a resurgent coronavirus and plagued by delays with vaccine supply, South Africa began the second phase of its public vaccination campaign on Monday, opening appointments for people aged 60 or older. The country has a 14.5 percent positivity rate, according to the Africa C.D.C.

Japan on Friday approved the Moderna and AstraZeneca coronavirus vaccines for use in adults, giving the country much-needed new options as it tries to speed up an inoculation campaign that has been one of the slowest in the developed world.

Previously, only the Pfizer vaccine had been authorized for use in Japan, where just 4.1 percent of the population has received a first shot. Vaccinations have been held up by strict rules that allow only doctors and nurses to administer shots, and by a requirement that vaccines be tested on people in Japan before they are approved for use.

Japan is in the midst of a fourth wave of Covid-19 infections, just two months before the Summer Olympics in Tokyo are set to begin. Tokyo and eight other prefectures are under a state of emergency that will last at least until the end of this month, and Okinawa is expected to be added to that list. Japan has been reporting about 5,500 cases a day, compared to 1,000 in early March.

A Health Ministry panel recommended on Thursday night that the government approve the Moderna and AstraZeneca vaccines. The health minister, Norihisa Tamura, said that the Moderna shots would be used at mass inoculation sites scheduled to open on Monday in Tokyo and Osaka, which will be staffed mainly by military doctors and nurses.

The government has not said when the AstraZeneca vaccine would be deployed. NHK, the public broadcaster, reported that despite the green light from the government, the use of AstraZeneca might be delayed over concerns that it could be linked to very rare cases of blood clotting.

It is not yet clear whether this specific virus poses a serious threat to humans, the researchers stress. The study does not prove that the pneumonia was caused by the virus, which may not be capable of spreading between people. But the finding, which was published on Thursday in Clinical Infectious Diseases, highlights the need to more proactively search for viruses that could jump from animals into humans, the scientists said.

“I think the key message here is that these things are probably happening all over the world, where people come in contact with animals, especially intense contact, and we’re not picking them up,” said Gregory Gray, an infectious disease epidemiologist at Duke University who is one of the study’s authors. “We should be looking for these things. If we can catch them early and find out that these viruses are successful in the human host, then we can mitigate them before they become a pandemic virus.”

Seven coronaviruses are currently known to infect humans. In addition to SARS-CoV-2, which is the causes of Covid-19, there are coronaviruses that cause SARS, MERS and the common cold. Many of these viruses are believed to have originated in bats, but can jump from bats to humans, either directly or after a stopover in another animal host.

Scientists have known for decades that coronaviruses can cause disease in dogs, and recent studies have shown that the coronavirus that causes Covid-19 can infect both cats and dogs. But there has not been any evidence that dogs transmit it, or any other coronavirus, to humans.

President Alberto Fernández of Argentina ordered a nine-day lockdown in the worst-affected parts of the country to help curb the spread of the coronavirus as the nation struggled to contain a second wave of the outbreak.

In a speech broadcast nationally on all radio and TV stations, Mr. Fernández ordered a lockdown that starts on Saturday and ends on May 30 in those regions. That will be followed by another nine days of restrictions, the severity of which will be determined by how much the country is able to control the spread of the virus.

“We are living the worst moment since the start of the pandemic,” Mr. Fernández said. “If we follow the guidelines, we will reduce the impact of this second wave. It is imperative that every local jurisdiction strictly apply these guidelines. There is no space for speculation and there is no time for delay.”

Argentina, like many of its neighbors in Latin America, saw an alarming spike in cases in April that has shown little respite as the region struggles to vaccinate people quickly enough to slow the spread. In the last seven days, the country’s daily average of new cases soared to become the fourth-highest in the world, and deaths rose to be the fifth-highest.

On Thursday, Argentina recorded 39,652 new cases and 494 new deaths. So far, 18 percent of the population has received at least one dose of a vaccine and 4.7 percent are fully vaccinated, according to the Our World in Data project at the University of Oxford. Neighboring Chile has fully vaccinated 40 percent of its population.

It’s not every day that an American governor appears alongside a man dressed as a lottery ball.

But that’s exactly what happened on Thursday as Gov. Larry Hogan announced that Maryland would partner with the state’s lottery to provide $2 million in prize money for residents who get vaccinated.

“Our mission is to ensure that no arm is left behind and we’re committed to leaving no stone unturned and using every resource at our disposal to achieve that goal,” Mr. Hogan said.

Beginning May 25, the Maryland lottery will randomly select and award $40,000 to a vaccinated Marylander every day through July 4, when a final drawing will be held for a grand prize of $400,000. Any Maryland resident who has been vaccinated in the state will be automatically enrolled in drawings.

“The sooner you get your shot, the more lottery drawings you will be eligible for,” he said, adding, “There’s no better time than now and there should be no more excuses.”

The state has administered about 5.7 million vaccines, and 44 percent of the state is fully vaccinated, according to a New York Times database. But like other states across the country, vaccination rates have tapered off. States have turned to an array of incentives — including beer, money, transit cards and joints — to get shots into the arms of more Americans.

“Promotions like this are just one more way that we’re reinforcing the importance of getting every single Marylander we can vaccinated against Covid-19,” Mr. Hogan said. All funding will be provided from Maryland’s lottery marketing fund.

Maryland isn’t alone in trying to lure residents with the chance of big winnings. This month, Ohio’s governor, Mike DeWine, offered a $1 million lottery prize for five people who get vaccinated. That effort would be paid for by federal coronavirus relief funds, Mr. DeWine said during a statewide televised address.

And in New York, the state will hand out free scratch-off tickets for the “Mega Multiplier” lottery to those 18 and older who get their shot at 10 state mass vaccination sites next week, Gov. Andrew Cuomo said on Thursday. The pilot program lasts from next Monday to Friday. The tickets could yield prizes from $20 to the $5 million jackpot, he said.