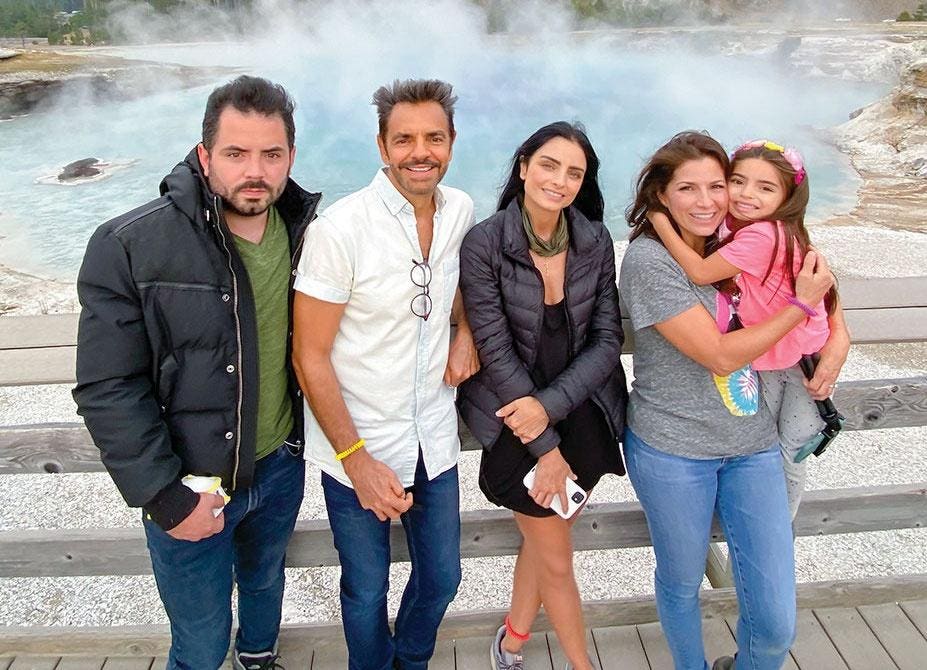 Eugenio Derbez and his celebrity family hit the road for their second vacation, and the unfiltered behind-the-scenes of their new adventure has given life to Season 2 of the travel docu-comedy De Viaje con los Derbez.

After the first season’s chaotic adventure in Morocco, which rounded up the entire clan for the first time, the celebrity family debated whether to try it again. And when they gave the green light, the pandemic halted everything.

“We decided to cancel the project. Then, all of a sudden we thought what if we avoid airplanes and people and get an RV? In the end, I think it was a very good idea, because it helped us to connect more as a family and see some spectacular sights,” says star Eugenio Derbez.

Eugenio, his wife Alessandra Rosaldo and their young daughter Aitana, the actor’s older sons Vadhir and José Eduardo, daughter Aislinn Derbez and even the family’s dog, Fiona, got to explore the beautiful scenery of the northwest of the United States – from extreme adventures at Perrine Bridge in Twin Falls, Idaho to taking in the breathtaking views at Yellowstone National Park. The finished product looks like the family had some unexpected hiccups, lots of fun and some unforgettable moments.

“It wasn’t picture perfect,” chimes in his wife, Alessandra. “I love nature, but I told Eugenio, I can deal with roughing it up a bit, as long as there is a clean bathroom, which he assured me we would always have, and oh surprise… But that’s why we do these trips. To learn, to adapt. Life is about adapting. Like we had to adapt to the pandemic and a new way of life.”

The pandemic hit close to home. Eugenio’s son Vadhir got COVID-19, something they tackle in the series.

“I felt a great disappointment because coordinating everyone’s schedules to do this project is difficult. I can hardly ever get all my family together, because they are always very busy. So, I was very excited to do this trip. And literally, with just a couple of days to go, we get the news. It was devastating for me. I felt like I was going to miss out on a great opportunity to be with my son,” shares Eugenio. “Obviously, the concern was over his health. It was very, very, very shocking to me. I had to restrain myself not to get angry because he was really irresponsible. He didn’t take care of himself, in the middle of a pandemic.”

They obviously make the best of the situation, starting off their adventure with one less family member. While Eugenio doesn’t reveal whether Vadhir joins them at some point, it’s apparent he does, somewhere along the journey.

Eugenio’s humor and antics and some outrageous activities for the travelers aim to entertain viewers, as well as details of the family’s drama, including Aislinn’s split from husband and actor Mauricio Ochmann. Neither he, nor their baby daughter participated in the show’s second season.

“It’s not easy to travel with family,” says Alessandra. “But as a mother, giving Aitana those childhood memories of her with dad, mom and siblings, getting to see different places, getting that opportunity to travel as a family is a blessing.”

The first four episodes of the second season of De Viaje Con Los Derbez are now available from streaming in the U.S. on Pantaya and internationally on Amazon Prime Video. The remaining three episodes drop on May 27. The full first season of the original unscripted series is available for streaming on Pantaya in the U.S. and Puerto Rico