Defending the Right to Vote 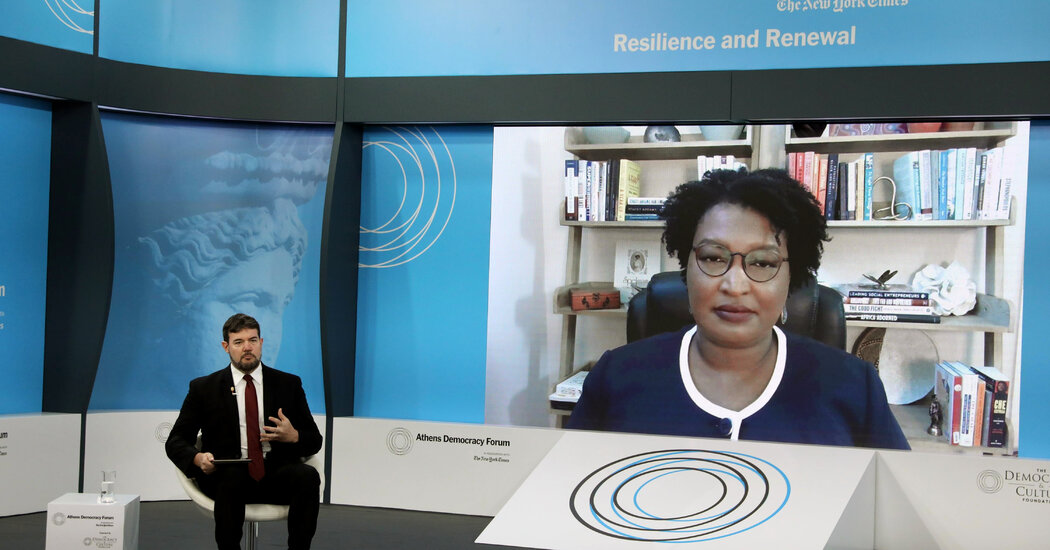 This is an article from World Review: The State of Democracy, a special section that examines global policy and affairs, and is published in conjunction with the annual Athens Democracy Forum.

Stacey Abrams was the Democratic Party leader in the Georgia House of Representatives, and she was her party’s candidate for governor of Georgia in 2018. She is the founder of the New Georgia Project, which focuses on voter registration. She is also the founder of Fair Fight Action, which is focused on promoting fair elections, educating voters about their rights and fighting voter suppression. She talked to Patrick Healy of The New York Times. The conversation has been edited and condensed.

MR. HEALY I want to start by asking you about the state of democracy, and specifically is the democratic system showing resiliency in Georgia, in the U.S., around the world, or is it showing how vulnerable democracy is to bad-faith actors and their allies in politics and in the media?

MS. ABRAMS The undermining of it began in earnest after the election of Barack Obama, but accelerated with the evisceration of the United States’ Voting Rights Act. With the 2013 (Shelby County v. Holder case), we saw an impressive weakening of the guardrails that protected the most vulnerable members of our society from voter suppression. But what we also saw happening on a parallel track was the continuation of a roughly 40-year [evolution] of this notion that [you] should all get to participate in democracy and should be able to rely on the government that we were voting for.

So we are watching this evisceration that is happening with the infrastructure of voting, but also this continued attack on the utility of the government itself. And we are watching that resilience undermined and we’re watching the forward march of authoritarianism under a different guise, but with a similar end, which is the oppression of minority votes and voices, the solidification of power, and a single ideology and, sadly, the rejection of this notion that we’re all in it together.

And so where I stand today is that while we watched 600 bills move through 48 states to undermine voting rights, we are also watching the national effort through the Freedom to Vote Act and the John Lewis Voting Rights Advancement Act, that again strike both a sense of hope, but also a sense of despair that we are in this position in 2021.

MR. HEALY What does it say about the health of democracy that the majority party, the Democrats in the White House, in the House and in the Senate, which has control, is still not able it seems to stop that march?

MS. ABRAMS The United States has a uniquely problematic system, and that is a U.S. Senate that is controlled through the “filibuster.”

This is an antiquated mechanism that permits the minority party to block majority determinations by simply refusing to end debate. And it has been around for, generations, but it had its ignominious usage during the Civil Rights fights of the 1950s and ’60s

MR. HEALY Why do you think so many democratic systems — not just in the U.S. but around the world — are either unprepared or too vulnerable to deal with the strategies and the tactics of bad-faith actors, of their donors, of their allies in the news media?

MS. ABRAMS Sadly we have this halcyon vision of democracy. We remember the rise of democratic values and the quashing of the authoritarian regimes post-World War II. But what we have witnessed is that there is not the stability of democratic ethos that we thought to be true. We have watched very stable nations fall prey to authoritarianism. Because democracy is only seen as a vital and permanent solution as long as it is the one that provides the greatest [amount of] benefit to [citizens].

And there’s certainly better scholars and theorists than myself who’ve pointed out that competency has been the hallmark of whether democracy can withstand bad actors. But in every nation where we have seen authoritarianism leave traction, it is often because they are able to promise more stability, they are able to promise greater competency than a fragile democratic system.

I think around the world what we have to acknowledge is our responsibility to ensure that not only are we espousing the benefits of democracy as a participatory process, but we’ve got to couple that with demonstrating that it is actually a functioning way to govern nations. And as long as authoritarianism, even with the quashing of individual rights, can show the functioning of government, we start to lose purchase in an argument. But it’s a solvable problem if we are willing to acknowledge it and start to fix it.