Defying Violence, Women Join in Protest Against the Taliban 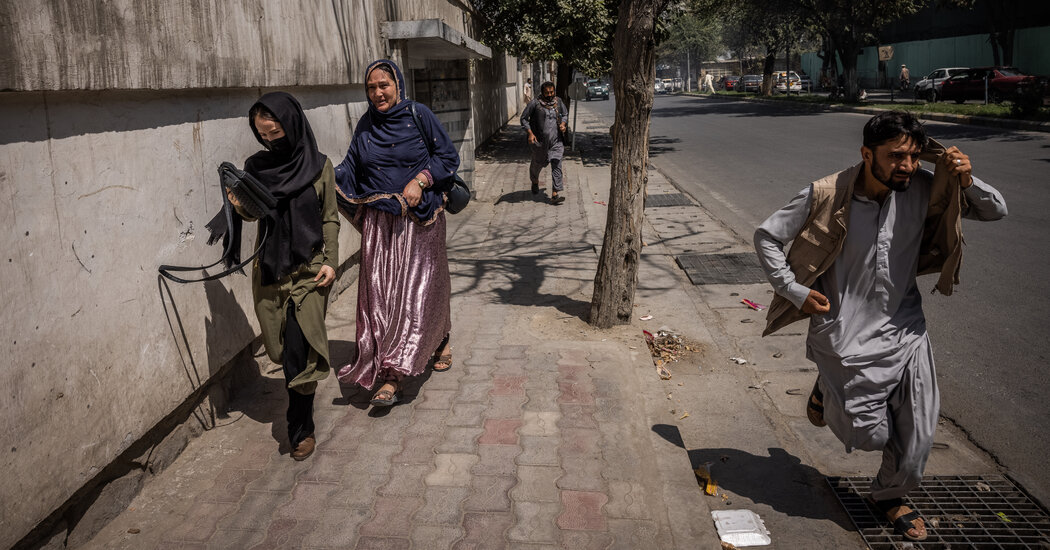 KABUL, Afghanistan — Despite the threat of violent beatings and retaliation, hundreds of women marched in the streets of Kabul on Tuesday morning, calling for the Taliban to respect their rights and making it clear that they would not easily surrender the gains they have made over the past two decades.

But as the crowds grew, with women joined by hundreds of men, protesters were met with blows from rifle butts and hit with sticks, according to witnesses. Then shots rang out. The crowd scattered and for the second time in less than a week, the Taliban used force to crush a peaceful demonstration.

Even as the Taliban continued to fight to destroy armed opposition in the country, seizing control of the restive Panjshir Valley on Monday, and planned to announce a new government that they have promised will be inclusive, the breakup of the demonstration on Tuesday was yet another indication that they would use a heavy hand to stifle peaceful dissent.

It was also a remarkable display by women, who suffered brutal subjugation the last time the Taliban were in power and who do not believe the Taliban have changed.

The images of Afghans repeatedly taking to the streets in recent days, even as the Taliban have cemented their grip on the country, underlined the challenges the Taliban face as the former insurgents try to form a government that can win the hearts and minds of a generation of Afghans who never lived under Taliban rule, particularly those in urban areas.

The Taliban face an uphill struggle to gain legitimacy, not only at home but also abroad, amid a spiraling humanitarian crisis. Basic services like electricity are under threat, while the country has been buffeted by food and cash shortages. Meanwhile, fears are growing that the group is returning to the repression of the past.

The fact that women have been prominent participants in many of the recent protests has also underscored their willingness to stand up for their rights even in the face of rifle butts, tear gas and retribution. During the two decades before the Taliban retook power, women were active in Afghanistan and, among other things, held political offices, joined the military and police forces, played in orchestras and competed in the Olympics.

Many Afghan women, who have benefited from education and the right to freedom of expression over the past twenty years, fear a return to the past when women were forbidden from leaving the home without a male guardian, and faced public flogging if they breached morality rules by, for example, not covering their skin.

But the group has yet to codify any new laws or offer specifics on how it plans to govern. Early signs from around the country have not been promising, including the Taliban warning women to stay home until the rank and file of Taliban fighters can be taught how not to hurt them.

The protests on Tuesday were the second demonstration involving women in the nation’s capital in less than a week, and it was also the second to be crushed violently.

On Friday, participants in a demonstration led by women demanding inclusion in the new government said they were beaten by Taliban fighters.

A 24-year-old participant said in a telephone interview that the Taliban used tear gas, rifle butts and metal clubs or tools to disperse the crowd. She said she received five stitches to close a head wound after she was knocked unconscious by a blow from one of the metal objects.

But less than a week later, women were back on the streets.

Rezai, 26, one of the coordinators and organizers of the latest protest, only gave her first name for fear of retribution. She said the demonstration was organized in close coordination with national resistance forces.

“We invited people using social media platforms,” she said. “And there were more people than we expected. We are expecting more rallies tonight because people do not want terror and destruction. The Taliban have had no achievements since they have taken power except for killing people and spreading terror. So it was an utterly self-motivated protest, and we just coordinated and invited people to participate.”

As they marched on Tuesday morning, they carried a banner with a single word: “Freedom.”

The women chanted the same word as they walked, the Taliban watching closely. They were joined by men, many condemning Pakistan for what they view as its support for the Taliban and interference in Afghan affairs.

As a photographer for The Times approached the demonstration on a street outside the presidential palace, known as the Arg, a convoy of at least a dozen Taliban pickup trucks raced toward it.

As soon as the Taliban fighters dismounted their trucks, they started shooting — mostly into the air, it seemed. There were no immediate reports of severe injuries or fatalities.

The people — which appeared to number several hundred — started running.

The large gathering was over. A short while later, when some of the male protesters gathered in a small group and started shouting pro-resistance slogans, the Taliban chased them away.

After the crowd dispersed, Jamila, 23, said it had been a peaceful demonstration.

“The people just went to the streets and protested,” she said. But she worried that the Taliban’s tactics to break up the crowd could lead to bloodshed.