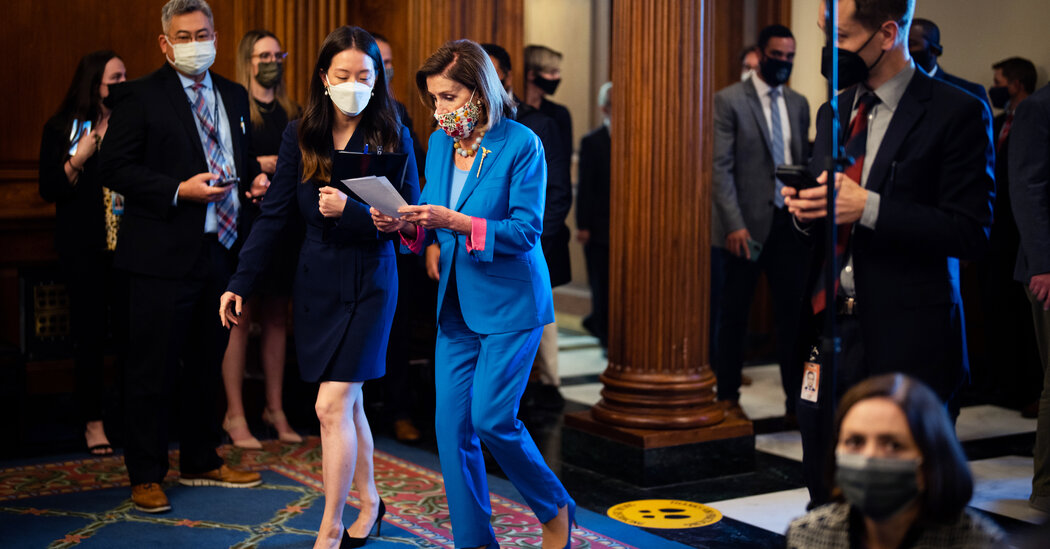 For more than a decade, congressional Democrats have been a notably unified and functional bunch.

They responded forcefully to both the financial crisis that began in 2007 and the Covid-19 pandemic. They passed Barack Obama’s signature health care law, succeeding on an issue that had bedeviled Washington for decades. And they remained almost completely united against Donald Trump’s legislative agenda and attacks on democracy.

But the era of productive Democratic unity is now in doubt — as is President Biden’s domestic agenda.

This morning, I’ll explain last night’s developments on Capitol Hill and look at where things may go from here.

Shortly before 11 p.m., Steny Hoyer of Maryland — the second-ranking Democrat in the House — announced that “no further votes are expected tonight,” an acknowledgment that the party did not have the votes to pass a $1 trillion infrastructure bill.

House Speaker Nancy Pelosi had been insisting throughout the day that the vote would happen. It was one of the few times in her almost two decades as the leader of House Democrats that she did not appear to be in control of her caucus, reminiscent of the chaos that has instead tended to surround House Republicans this century.

“It’s a serious setback,” Carl Hulse, The Times’s chief Washington correspondent, told me, “but I don’t think it’s the end of the effort.”

Perhaps the most surprising part of last night’s developments is that many analysts believe that congressional Democrats have made progress toward a deal over the past 24 hours — even if they are not there yet, and the talks could still collapse.

The Senate has already passed the infrastructure bill, and Democrats overwhelmingly favor it. But House progressives have refused to vote for it without assurances that moderate Democrats also support the other major piece of Biden’s agenda — a larger bill (sometimes called a “safety net” bill) that would expand health care access and education, fight climate change and reduce poverty, among other measures.

Progressives are worried that if they pass the infrastructure bill, moderates will abandon the safety-net bill, which is a higher priority for many Democrats.

These are precisely the sort of disagreements that Democrats managed to surmount in recent years. During the debate over Obama’s health law, for example, moderates were worried about its size and ambition, while progressives were deeply disappointed about what it lacked (including an option for anybody to buy into Medicare). Yet nearly all congressional Democrats ultimately voted for the bill, seeing it as far preferable to failure.

This time, moderates and progressives are having a harder time coming to an agreement. The left, unhappy about the compromises it needs to make, has decided to use tougher negotiating tactics than in the past — thus the lack of an infrastructure vote last night. And the moderates, like Senator Joe Manchin of West Virginia and Senator Kyrsten Sinema of Arizona, have been publicly vague about what they are willing to support in the safety-net bill.

Encouragingly for Democrats, Manchin’s stance did become clearer yesterday, potentially allowing the party to come to a deal on both major bills. It is not out of the question that a deal could come together quickly and the House might vote on the infrastructure bill today or next week.

Manchin said yesterday that he favored a safety-net bill that cost about $1.5 trillion, rather than the $3.5 trillion many other Democrats, including Biden, favor. He also listed several policies that he could support in the bill, including higher taxes on the rich; a reduction in drug prices; and expansions of pre-K, home health care, clean energy and child tax credits.

These are many of the same priorities that progressives have, even if Manchin’s proposed cost means that the party will need to make hard choices about what to exclude from the bill. But the terms of the negotiations now seem clearer than they have been.

Manchin himself suggested as much. “We need a little bit more time,” he said yesterday, according to Chad Pergram of Fox News. “We’re going to come to an agreement.”

The Democrats have enormous incentives to come to agreement. If they fail, Biden’s domestic agenda is largely sunk, and the party will have forfeited a chance to pass major legislation while controlling the White House, the Senate and House — a combination that does not come along often. Democrats will also have to face voters in next year’s midterms looking divided if not incompetent.

All of that suggests they will find a path to an agreement. But it’s far from assured. The tensions within the party are more serious than they have been in years.

An unroyal wedding: Princess Mako of Japan is getting married. It’s no fairy tale.

Advice from Wirecutter: Charge all your devices in one place.

Modern Love: Four years into their marriage, her husband matched with her on OkCupid.

Lives Lived: Carlisle Floyd composed operas that explored the passions and prejudices of the South, drawing on the Great Depression and the aftermath of the Civil War. He died at 95.

‘Maybe I’ll be remembered as the Grumpy Bond’

After 15 years of playing James Bond — longer than any other actor — Daniel Craig will make his final appearance as 007 in the franchise’s latest entry, “No Time to Die.” (Read A.O. Scott’s review). Craig spoke with The Times about his send-off. Some highlights:

Craig never thought he’d land the part: “I was just amongst the mix — someone to dismiss,” he said, adding that, at best, he figured he’d get a one-off villain role: “‘Here you go, have a baddie.’”

You won’t have to wait long to see him again: Craig has already filmed a sequel to the popular 2019 whodunit “Knives Out,” reprising his role as a gentleman sleuth. Next year, he’ll also star in a new Broadway production of “Macbeth,” alongside Ruth Negga as Lady Macbeth.

Who might the next Bond be? He has no idea. “Whoever does it, good luck to them. I hope they have just as great a time as I’ve had,” he said. Frequently mentioned possibilities include Idris Elba, Lashana Lynch and Tom Hardy.

On becoming a meme: There’s a clip of Craig on “Saturday Night Live,” where he introduces the singer The Weeknd with relish, that many people like to post at the end of the week. “They do? It’s amazing. I don’t know what that is, but thank you. That’s lovely. I suppose I’d have to have social media to know what that was all about.” — Sanam Yar, a Morning writer