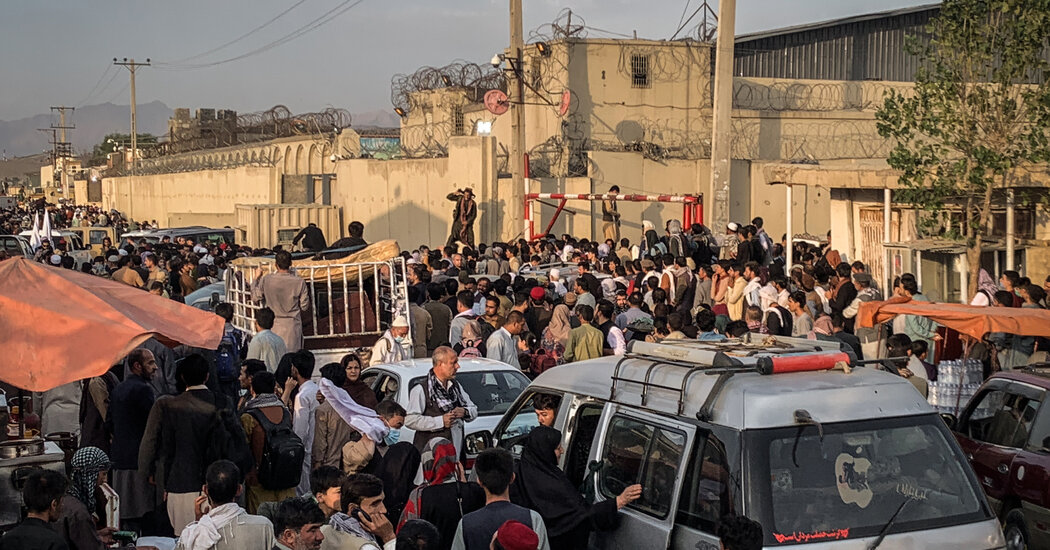 On Saturday morning, a former interpreter for an American company in Kabul plunged into a mass of humanity outside a gate at the Kabul airport with her family in tow.

Even as she was jostled and elbowed by people in the throng, she pushed ahead, desperate to secure a flight out of the country for everyone accompanying her — her husband, 2-year-old daughter, disabled parents, three sisters and a cousin.

Then the crowd surged. The entire family was slammed to the ground. People trampled them where they lay, the woman recalled just hours later.

She remembered someone smashing her cellphone and someone else kicking her in the head. She couldn’t breathe, so she tried to tear off her abaya, a robe-like dress.

As she struggled to her feet, she said, she searched for her toddler. The girl was dead, trampled to death by the mob.

“I felt pure terror,” the woman said in a telephone interview from Kabul. “I couldn’t save her.”

In the six days since the Taliban seized power in Afghanistan, Afghans have negotiated a terrifying new reality after enduring 20 years of war and suicide bombings. Their world has been upended, and something as prosaic as a trip to the airport now inspires terror. Just stepping outside the front door can be jarring and disorienting.

Across the country, Afghans who served the American military effort in Afghanistan, or the American-backed former government, are in hiding, many of them threatened with death by the Taliban. Gunmen have gone door-to-door, searching for “collaborators” and threatening their family members, according to human rights groups.

A 39-year-old former interpreter for the U.S. military and Western aid groups was hiding Saturday inside a home in Kabul with his wife and two children. He said the Taliban had telephoned, telling him, “Face the consequences — we will kill you.”

The interpreter said he had given up trying to secure a flight after a harrowing and ultimately futile attempt to force his way past Taliban gunmen and unruly mobs at the airport the day before. He has been spending his time calling and texting American soldiers and officers in the United States who are struggling to find ways to rescue him and his family.

“I’m losing hope,” he said by telephone. “I think maybe I will have to accept the consequences.”

Another former interpreter for the U.S. military was also in hiding in Kabul Saturday. He, too, said he had abandoned any hope of getting a flight for him, his wife and young son after two terrifying forays to the airport.

“I’ve lost hope,” he said. “I’ve lost trust in the U.S. government, which keeps saying, ‘We will evacuate our allies.’”

“Evacuation is impossible,” he added.

Afghans who have been crowding airport gates tend to panic every time tear gas is released or shots are fired into the air to disperse the crowds, the former interpreter said.

“Your child could get trampled,” he said. “If the U.S. gives me the entire universe after I lose a child, it is worthless.”

In the Shar-e-Naw neighborhood of Kabul, a female Afghan journalist said she finally ventured outside after hiding indoors since last Sunday. Trying to obey randomly enforced Taliban strictures on women, she wore a full-body abaya.

“It was so heavy it made me feel sick,” she said. And in the street, she said, “There is no music, nothing. All you hear is the Taliban talking on TVs and radios.”

She said her sister-in-law appeared in front of male family members with her hair uncovered. Her brother-in-law gave her a vicious kick and told her, “Put your bloody scarf on!”

Also in hiding was a former Interior Ministry police officer who had seen Taliban fighters ransack the ministry, combing through paperwork that contained detailed information about employees. He worried that they would coming looking for him.

“Kabul has become a city of fear,” the officer said.

In Kunar Province in eastern Afghanistan, a male journalist said he was hiding inside his home Saturday, afraid to show his face. He had reported on Taliban atrocities when the government controlled the province. Now the Taliban were in charge and on the prowl for journalists, he said.

“The Taliban will kill me and members of my family, just like they’ve killed my colleagues,” the journalist said.

In the eastern province of Khost, another male journalist was also in hiding, moving between his home and the home of a family member. Taliban fighters were roaring through the province in American-supplied vehicles captured from Afghan security forces, he said. He feared they would find him soon.

In Kabul, the woman whose daughter was killed said the family was able to bring the girl’s body back for burial. She wept as she recalled how she would try to ease her daughter’s fears whenever gunshots rang out in their neighborhood: She had told her they were “crackers” — firecrackers.

“My baby was such a brave child,” she said. “When she heard the gunshots, she would just yell out, ‘Crackers!”

She said she and her family were unlikely to return to the airport anytime soon. “I’d rather die a dignified death here at home than die in such an undignified way.”

Inside the Kabul house where the 39-year-old former interpreter was hiding, hope was fading. He said he was gratified by persistent attempts at assistance by the American soldiers he once served, but had concluded they could no nothing.

“If the Taliban kill me, OK, I can accept that,” he said. “I only ask them to spare my children.”