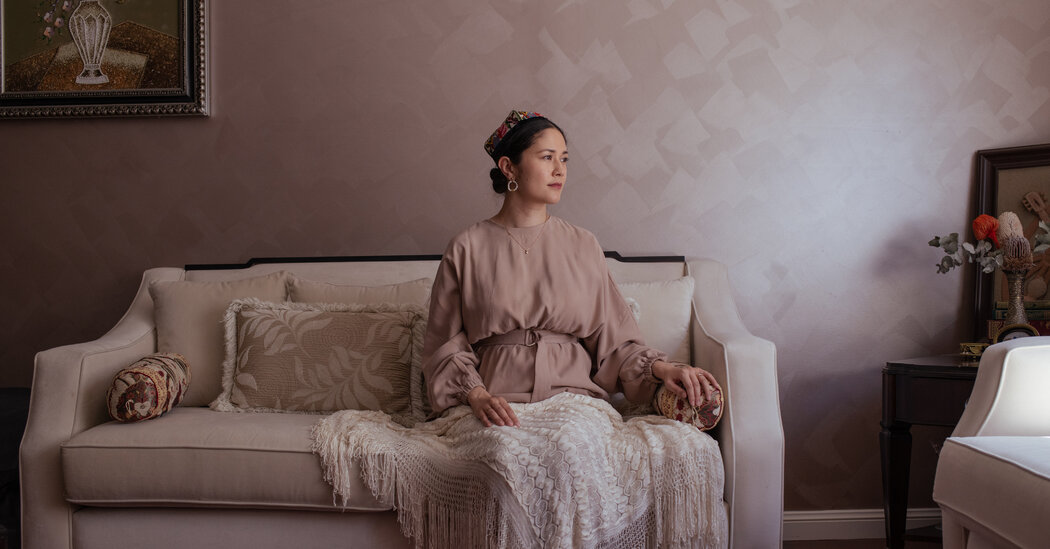 The woman’s first doppa was embroidered with a rose bed and intertwining black leaves — a motif signifying beauty, spiritual connectedness and resistance.

The doppa, a traditional skullcap worn across Central Asia, was passed down to the woman, Subhi Bora, as a girl by her mother, who is Uyghur, a predominantly Muslim, Turkic group from the autonomous region of Xinjiang in northwestern China.

Ms. Bora, 31, who grew up in Sydney after her parents fled China, had conflicting feelings about her different cultural identities and never wore the hat outside her home. But as the repression against Uyghurs in Xinjiang has become more brutal in recent years, the crisis ignited a sense of urgency to reconnect with her heritage.

That set Ms. Bora on a trip to Central Asia to find a traditional doppa like the one she was given as a child. That journey turned into a storytelling project and an initiative to connect doppa makers and buyers online, which has gained momentum in recent months.

“As an Uyghur person,” Ms. Bora said, “if I don’t hold onto this doppa, it might just disappear one day.”

Ms. Bora’s mother and her father, an ethnic Uzbek, both made a point of passing along their traditions. Ms. Bora recalls a childhood filled with hand-pulled laghman noodles (a Uyghur delicacy), the Atlas silk dresses of Central Asia she wore at Uyghur protests, and the melodious sound of the dutar, a two-stringed instrument played by her father.

As Ms. Bora grew older, she became more invested in her Uyghur heritage, an interest that was nurtured by a 2018 visit from a friend, Nadir Nahdi, a British filmmaker. Like Ms. Bora, Mr. Nahdi, now 30, had struggled as a child with his mixed identity. (He was born and raised in England and has roots in Indonesia, Kenya, Yemen and Pakistan.)

Intrigued by the delicate doppa, he suggested that Ms. Bora explore her heritage by traveling with him to Central Asia to make a documentary that used the hat as a symbol of her journey.

The doppa comes in numerous shapes, colors and styles. Traditionally, it was hand-embroidered with naturally dyed silk, and included intricate patterns that revealed details about the hat wearer.

“It is something which tells you a lot of things about a person,” said Lola Shamukhitdinova, an expert in Central Asian textiles. “Who are you? From what place do you come from? What are you? How many children do you have? What is your social status?”

In the days of the ancient Silk Road — the 4,000-mile trading route that connected China with Europe — Central Asia was renowned for its silk houses and varied styles of embroidery. But imperial Russia’s conquest of the region in the 19th century introduced methods of mass production, and artificial dyes supplanted those made with pomegranate husks, onion skin and acacia flowers. In more recent years, even doppa makers who had continued in the traditional ways have turned to machine-made designs and synthetic silk to cut costs.

Steering clear of Xinjiang because of safety concerns, Ms. Bora and Mr. Nahdi traveled in 2019 to Uzbekistan, another Turkic culture where Ms. Bora has family. They searched bazaars across the country, where vendors told them that handmade doppas with natural materials were scarce because of insufficient demand.

But the traditional craft had not entirely vanished. In the southern city of Shahrisabz, outside the turquoise-domed Kok Gumbaz Mosque, Mr. Nahdi and Ms. Bora met their first doppa master, Gulnara Choriyeva.

Ms. Choriyeva started a collective for handmade doppas in 1991, after the collapse of the Soviet Union and during a renaissance in traditional artisan work in Uzbekistan. Her parents had hoped she would become a doctor like them, but Ms. Choriyeva, 54, was drawn to the vibrant floral motifs of her city’s traditional iroki embroidery style, a craft she learned from her grandmother, and has now taught her own children and granddaughter.

“It is human nature to be pulled toward what is in your bloodline,” Ms. Choriyeva said.

Her collective of about 45 female artisans is now producing three doppa designs for the project, two in the Shahrisabz style. The third, in the Uyghur style, was based on Ms. Bora’s rose-garden doppa.

Each doppa takes about two weeks to make.

“They give pieces of themselves and their souls to these doppis,” Ms. Choriyeva said of the artisans. (“Doppi” is the Uzbek word for the hat.)

For the project’s final design, Mr. Nahdi and Ms. Bora went to Bukhara, an ancient caravan city that became an emirate in the late 18th century. There they met Manzila Zakirova, now 38, a doppa master in the city’s distinctive gold-embroidery technique.

In Bukhara’s emirate period, gold embroidery was a secret craft taught only to men and reserved exclusively for the emir and his court. When the emirate was defeated by Soviet forces in 1920, Bukhara’s sumptuous gold embroidery almost disappeared.

“But the masters continued their art,” said Ms. Zakirova, whose grandfather taught her the technique when she was 12.

Ms. Bora and Mr. Nahdi’s trip to Central Asia turned into “The Doppi Project” — a documentary available on YouTube and an initiative to raise awareness of Uyghur culture and the threats it faces.

One inspiration for the work was Mr. Nahdi’s journey to Indonesia in 2018 to learn more about his paternal grandmother, Ilyeh. A photo of her in a traditional batik dress was the only clue he had about her early life.

“There is a really sacred connection between cloth and human,” Mr. Nahdi said. It “ties us to place, identity and people,” he added, noting that he believed that migration and modernization had weakened that connection.

Guided by the Ethical Fashion Initiative, Mr. Nahdi and Ms. Bora negotiated a price with the artisans that was above market rates but wouldn’t disrupt the local industry. After briefly stalling because of the coronavirus pandemic, the project has sold almost 1,000 doppas in the past year, with a portion of the profits going to support Uyghur storytelling efforts.

“There is very little emotional investment in the Uyghur community, because people do not know who the Uyghurs are,” said Mr. Nahdi, who hopes the project will help foreground the humanity and rich culture of the Uyghurs.

Ms. Bora, who recently gave birth to her first child, said she intended to pass on a doppa to her daughter. She also said that before embarking on the project, she had “felt like a diaspora kid, a bit of a foreigner that was visiting.” That changed when an artisan at a silk factory in the city of Margilan told Ms. Bora that she was proud of her for taking an interest in her heritage.

After that, Ms. Bora said, “it felt like coming to a place I can call home.”