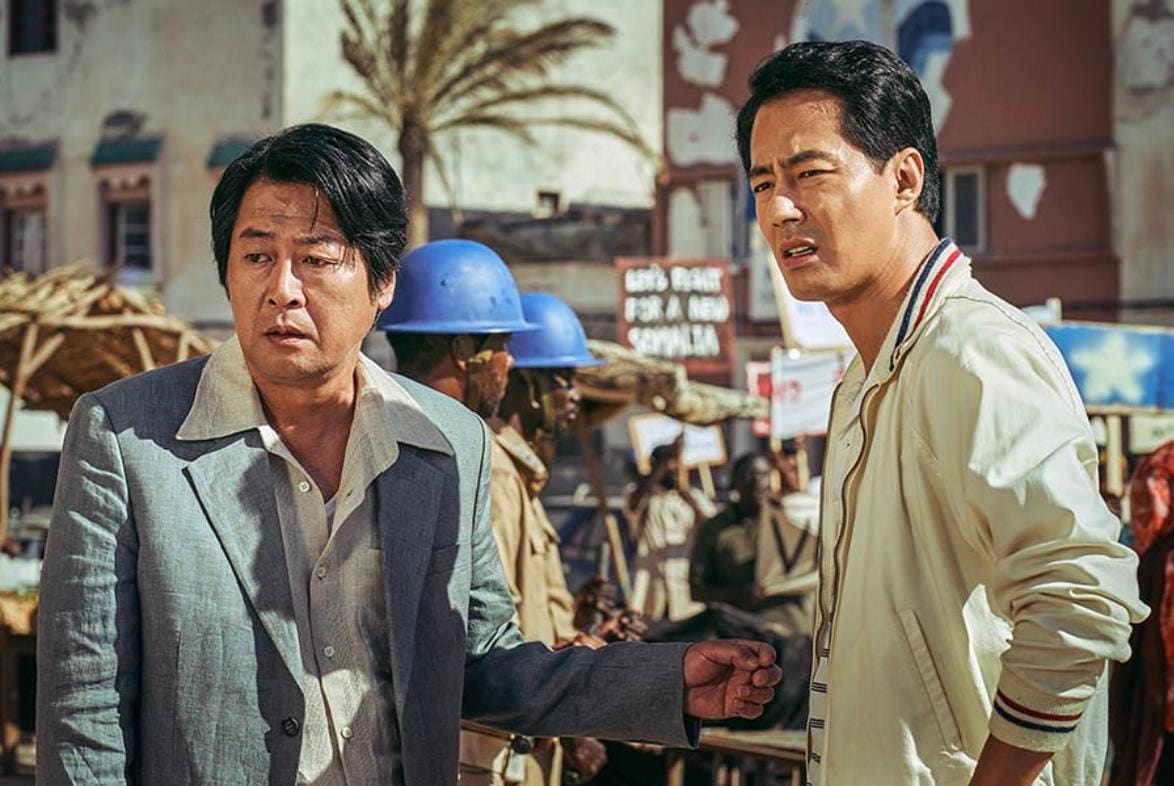 Being a diplomat requires composure and the ability to think coolly about how to best protect your nation’s interests. Kim Yoon-seok plays such an individual in Escape From Mogadishu, the engrossing Korean action thriller that opens this year’s New York Asian Film Festival. Kim plays Han Shin-sung, the ambassador assigned to the South Korean embassy in Mogadishu, the capital of Somalia.

The film is set in 1990 when both South and North Korea wanted to be admitted to the United Nations. Convincing the heads of African nations for an endorsement might help them gain admittance, so both Korean embassies vie for the Somalian president’s favor. It only takes a few minutes from the opening credits before this rivalry escalates into bullets and bloodshed and some viewers may wish their seats had seatbelts. It quickly becomes obvious that the diplomats are vulnerable even before political unrest ignites a tinderbox of violence.

Zo In-sung plays Kang Dae-jin, a counselor at the embassy. He’s a man who knows his way around the capital and is not afraid to bribe or browbeat others to get what’s needed. The cynical Dae-jin has no love for his North Korean counterparts, played by Huh Joon-heo and Koo Gyo-wan. He plays the game to win.

However, the conflict that the embassies engage in seems like child’s play compared to what happens next. As the country erupts in a bloody civil war, chaos ensues. No one is safe, not even those who live in the previously protected embassies. With all communications severed, there is no way to leave the country. When the North Korean embassy personnel are forced out onto the dangerous streets, they have nowhere to go. People are being shot on sight, accused of crimes and executed without a trial. The rebels consider supporting the existing government to be a crime and that means embassy personnel are targets. The only hope for the North Koreans is that the South Koreans take pity on them. That’s not a given.

The pace with which violence engulfs Mogadishu rattles even the composed Shin-sung and Dae-jin must rely on baseless displays of bravado to protect the embassy. They have to escape, but to do so will require a dangerous journey, filmed in a series of heart-palpitating action scenes made all the more gripping by the fact that this film is based on a true story.

With this story, director Ryoo Seung-wan, whose long list of celebrated films includes Sympathy for Lady Vengeance, The Berlin Files and Veteran, has convincingly captured small moments of human connection set amid the hellish landscape of war. His portrayal of war is so painfully detailed that it makes the connections seem all the more precious.

The film is already a box office success in Korea where it was released on July 28, marking one million admissions during its first week. Escape From Mogadishu can be seen at NYAFF.