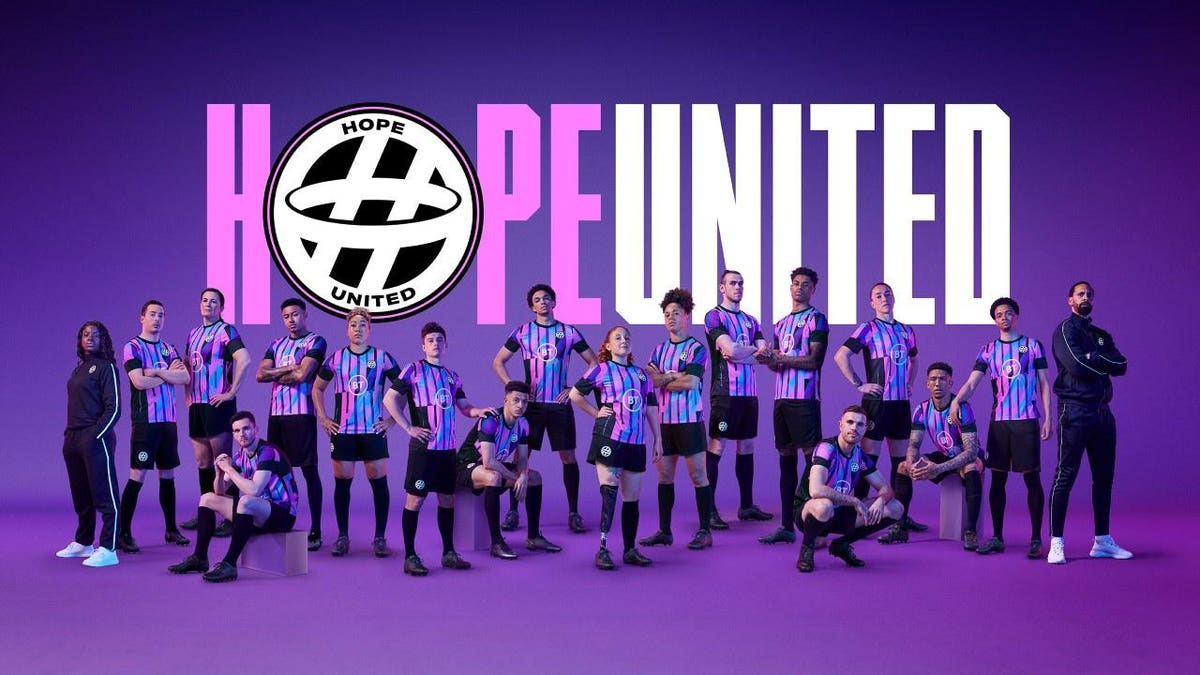 BT Sport has today brought together many of the leading soccer players in the United Kingdom to spearhead a new initiative aiming to combat the scourge of online abuse on social media. Coming off the back of the country’s 81-hour social media blackout they believe they can encourage people to unite in tackling online hate.

Premier League
stars such as Gareth Bale, Marcus Rashford and Jordan Henderson have joined Women’s Super League players like Lucy Bronze and Demi Stokes to form “Hope United” a unique squad from England, Northern Ireland, Scotland and Wales, managed by former international players Rio Ferdinand and Karen Carney, who have all experienced online hate to raise awareness, drive more support for change and educate the nation on how to be better digital citizens. With recent research from YouGov commissioned by BT Sport claiming that one in ten people have received online abuse in the past year, Hope United will aim to give everyone the digital skills required to combat it by educating children on how to recognize hate crime, joining together so victims of cyber-bullying do not suffer in silence and learning how to use social media for good.

England’s most capped soccer player in history, Fara Williams, is also part of the diverse squad. On May 9, she ended her glittering career after 20 years at the top of the game, playing throughout the 10-year history of the Women’s Super League and becoming the first woman to score for England at three separate FIFA Women’s World Cup tournaments including the decisive penalty which earned the Lionesses a Bronze Medal in 2015.

When the league was launched in 2011, they utilized several leading players as Digital Ambassadors but Williams reveals that was set-up as much to help the players as the fans. “How it was used all those years ago was more to help the female game in terms of how they can pay some of the players a little bit extra. Most of the teams, when they were offering it to players, it was more to bump the salary package up as opposed to having any real sort of media influence.”

Nonetheless, the use of social media has been pivotal in the growth of women’s soccer allowing fans to interact with players in a way never possible in the men’s game and enabling them to share footage previously unavailable when television coverage was sparse. “Social media platforms have been fantastic in terms of us as female athletes being able to really promote our game and drive our game forward,” believes Williams.

“I think that was a big part of the women’s game and what a big part of what players and clubs really wanted. They wanted to be a little bit different in terms of what the men were able to do, in terms of how big their game is and the interaction they are able to have with fans. We wanted to be more interactive, we wanted to hear from fans, communicate with fans. I still think that’s possible, because actually our real fans are really supportive of the women’s game and really supportive of what we do. The difficulty is the more our game is broadcast, the football fan in general will have an opinion of that, will always compare us to the men. There will always be sexism in terms of comments and there will always be racism out there until education around it becomes better.”

As a high-profile women’s soccer player Williams has been a victim of online hate but admits the way she has dealt with it in the past may not have been the best method of preventing it happening to others. “Sexism is within women’s sport, it’s always been there. I don’t think that just sport, it’s within general life. I’ve just learned to ignore it, read past it. I know that probably, in allowing that over the years, ignoring those sexist comments, it hasn’t put us in a better place today, than we were ten years ago. I think that only now that people are speaking about it can we start to make some sort of change.”

In November 2012, Williams made the controversial move from Everton to city-rivals Liverpool, something which led to her suffering online hate on social media as she explained to me, “I got abuse when I moved from Everton to Liverpool, I got called some horrible things. I didn’t allow that to affect me. I knew my move was for the right reason and it was only a minority. In terms of the women’s game I think it’s the minority. The bigger picture is the men’s game and how we stop that. The difficulty is that we’re in the public eye and we’re open to this social media abuse that people get that is unacceptable. We need to find a way in terms of coming together and trying to stop this.”

Williams hopes that Hope United will galvanize the same sort of energy that brought down the recent aborted attempt of leading clubs to set up a European Super League. “We’ve seen how quickly the Super League was turned around and how fans and the media gathered momentum to try and change that. If we had the same sort of approach with racism, sexism and online abuse in terms of sexuality, if we gathered that sort of momentum there, then could there be some sort of change?”

Earlier this season, Manchester United’s 19-year-old striker Lauren James was targeted for racist abuse on Instagram, Williams who witnessed James comes through the ranks at Arsenal believes supporting her means being there in the good times and the bad. “I know her dad and her parents. I played with Lauren when I was at Arsenal. She has really good people around her that will be advising her in the right way. It will be difficult for her to deal with. She shouldn’t have to deal with those sort of things regularly online. I don’t think anybody should be having to deal with those sort of things. I’ve been there (for Lauren) since she was 14. I was in regular contact, I still am. That’s just in terms of me being able to support her career. She needs to hear positive things. You actually want to be reminded of what you’re good at and why you’re doing it.”

Between April 30 and May 3, the English soccer community united in boycotting all social media platforms over four days demanding companies such as Facebook, Instagram and Twitter do more to implement stricter controls in preventing and taking down abusive posts, putting greater requirements on the effective verification of accounts and helping law enforcement with the prosecution of offenders. In spite of other sports and organizations supporting the blackout, Williams doubts whether any real change has resulted. “Do I think it’s had an impact? No, not at all. Raheem Sterling came out 24 hours after the blackout and was subject to racism again.”

Now as Williams ends her career, working in the media is one avenue she is exploring. She is not deterred or surprised by the social media abuse endured by her former international team-mates, Karen Carney and Alex Scott, as they have tried to forge a career as television pundits. “The abuse Karen and Alex have had since going out there, they were always going to fight against that being female. I think it’s the fact they are female, trying to give their opinion and knowledge and experience of football in the best possible way but in male-dominated environment.”

However, the prospect of receiving online hate for her views on the game will never cause Williams to sugarcoat her comments. “I just love football. I have an opinion. It doesn’t effect the way I think or feel. I feel I can hold an opinion in terms of football. I’ve been through many experiences in the game to know the way I feel. It’s opinions at the end of the day. Not everybody will like your views. Some will, some won’t and that’s something you have got to deal with.”

The players representing Hope United will star in a series of BT Tech Tips to educate the nation. “It’s a starting place isn’t it?” believes Williams. “It’s hope in being able to change things. If we can stand together and can be positive and give positive messages. For example, if you see something, just liking something online, add a positive comment. I’m sure someone would rather read something with positive energy than negative. It’s a fantastic initiative. Hopefully it can gather momentum and really take off.”

In the meantime, Williams also hopes that online abuse will not dissuade future generations of women players from interacting with their fans. “In terms of females still communicating with fans. I think it’s a big part of us and what we want our game to look like. I think that will still be there and I think it’s a positive part of our game.”