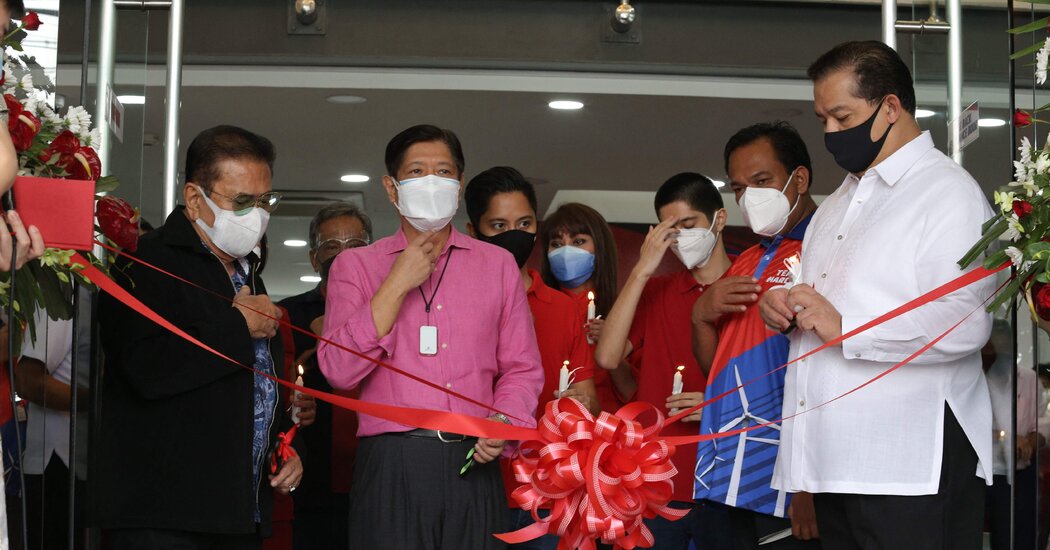 MANILA — The son and namesake of the dictator Ferdinand E. Marcos formally announced his plan to run for president of the Philippines on Tuesday, more than three decades after a popular uprising toppled his father’s brutal regime and restored democracy to the country.

Ferdinand Marcos Jr. joins the former boxing champion Manny Pacquiao and Francisco Domagoso, the mayor of Manila, in seeking the presidency in next year’s election. Leni Robredo, the vice president, and Sara Duterte-Carpio, the mayor of Davao City and daughter of President Rodrigo Duterte, are also expected to enter the race.

Mr. Marcos Jr., 64, once served as a governor and a senator. He lost his bid as vice president to Ms. Robredo in 2016, and sought to overturn that vote by accusing her of cheating. In his announcement on Tuesday, Mr. Marcos Jr. said he would focus on helping the public overcome the coronavirus pandemic, and vowed to lift the economy out of crisis.

“That is why I am announcing here today my intention to run for the presidency of the Philippines in the coming May 2022 elections,” Mr. Marcos Jr. said. “I will bring that form of unifying leadership back to our country. Join me in this noblest of causes and we will succeed.”

He also took an oath as a member of the Partido Federal ng Pilipinas, the political party he would be representing in the election. The party founded by his father, the New Society Movement, also recently endorsed him as a candidate.

Ferdinand Marcos ruled the country with an iron fist for two decades. He was defeated by a popular uprising in 1986 and went into exile in Hawaii, where he died three years later. He was accused of stealing up to $10 billion from state coffers and leaving thousands of activists dead or missing.

His widow, Imelda R. Marcos, and children were later allowed to return to the Philippines, where they worked to rehabilitate the family name. Mrs. Marcos was found guilty of corruption in 2018, but has eluded jail time.

Mr. Duterte, who announced his retirement last week, often publicly thanked the Marcos family for backing his candidacy in the 2016 presidential election. Just months into office, he allowed the dictator’s remains to be transferred to a national cemetery in Manila.

Judy Taguiwalo, an activist with the Campaign Against the Return of the Marcoses and Martial Law, said the announcement from Mr. Marcos Jr. was a “brazen show of disregard and contempt for the thousands of Filipinos killed, disappeared, tortured, displaced and violated” during his father’s brutal regime.

“Bongbong Marcos and his family have long been seeking to reclaim the highest seat of power after they were kicked out of the country by the people,” she said, referring to Mr. Marcos Jr. by his nickname, “and today, their shameless gall to return to the highest office in government is in full display.”

Mr. Marcos Jr., she said, was “spitting on the graves of the dead.”