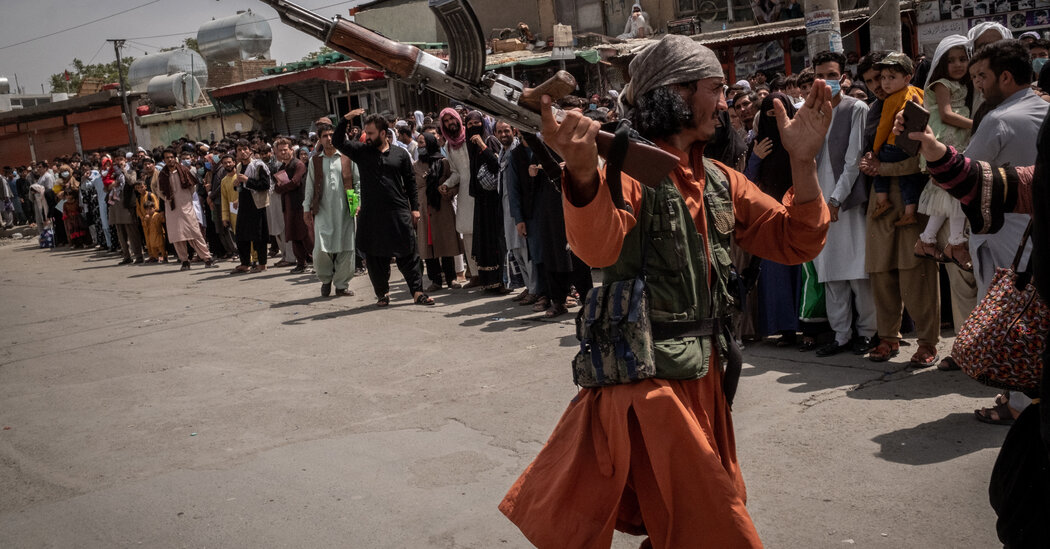 As the Taliban sought to consolidate control over Afghanistan on Wednesday, they faced the first challenges to their renewed rule, using force to break up protests in at least two cities, while an opposing faction vowed to hold out in one pocket of the country.

Millions of Afghans tried to parse conflicting clues about what lay in store for them and their nation, but many were not waiting to find out.

Despite Taliban assurances that there would be no reprisals against their opponents, thousands of people continued to crowd around the airport in Kabul, the capital, hoping to get a flight out of the country. Throngs rushed toward certain entrances, only to be met by Taliban troops who beat people back and fired their rifles into the air. A NATO official at the scene said 17 people were injured.

Taliban fighters used gunfire to disperse demonstrations in the northeastern city of Jalalabad and the southeastern city of Khost, with some of the protesters raising the Afghan government flags that the Taliban had taken down just days earlier. News reports said two or three people were killed in Jalalabad.

But in other cities, a tense quiet prevailed.

The former president, Ashraf Ghani, who fled the country on Sunday, surfaced in the United Arab Emirates and made his first public statement, saying that if he had stayed in Kabul, “the people of Afghanistan would have witnessed the president hanged.”

President Biden said on Wednesday that he was committed to getting every American out of Afghanistan, even if it meant keeping troops there past the Aug. 31 withdrawal deadline he set. “If there’s American citizens left, we’re going to stay to get them all out,” he told ABC News.

Though the Taliban hold control of nearly all of the country, some prominent figures continued to hold out with a corps of loyal fighters, saying they do not recognize the Taliban as legitimate rulers. One of them, Amrullah Saleh, the vice president in the toppled government, claimed that Mr. Ghani’s flight from the country had made him the acting president.

Mr. Saleh is in the northeastern Panjshir Valley, a stronghold of resistance to the Soviet Union in the 1980s and to the Taliban a decade later. He is allied with a regional leader, Ahmad Massoud, whose father, Ahmad Shah Massoud, was the leading anti-Taliban commander a generation ago, until he was assassinated two days before the Sept. 11 attacks.

“You can see that I’m in Panjshir and with our people,” Mr. Massoud said in a video posted to Facebook on Wednesday. “God willing I will remain here with our people.”

The Taliban have tried to signal to Afghanistan and the world that their return to power this week will not mean a reprise of the bloody regime of 1996 to 2001 that brutally repressed women, minorities and dissenters, and provided a safe haven for Al Qaeda.

But so far, evidence of what that more “inclusive” approach will mean, as a Taliban spokesman described it on Tuesday, has been thin, and Afghanistan is a nation suspended in confusion.

Women have been allowed to go to work and walk around freely in some places, but not others. Some schools have reopened but not others. The calm and order that the Taliban have tried to project have been punctuated by violence and looting. People have been told they could leave the country, but many were prevented from doing so, and it was uncertain how willing the rest of the world would be to welcome those who make it out.

Local Taliban commanders and fighters appeared unsure of what rules to enforce, so conditions varied widely depending on who was present, according to international observers.

“They are saying to us they are still waiting for instructions from the leadership, so the instructions have not yet reached the ground level,” said Caroline Van Buren, the Afghanistan representative for the United Nations’ refugee agency.

But a threat assessment commissioned by the United Nations says that Taliban militants appear to be stepping up efforts to arrest people who worked in the former government, particularly in the security services, and those who aided them — or, if that fails, may seize their family members, according to a confidential document shared internally among U.N. officials and seen by The New York Times.

The Taliban have asked U.N. aid agencies and other humanitarian groups to remain in Afghanistan, and for the most part they have said they planned to stay. Millions of Afghans rely on foreign aid for food.

In its previous stint in power, the Taliban barred women from working, going to school or even going outside without wearing a burqa and being escorted by a male relative. Those who violated the group’s codes were publicly flogged and sometimes executed.

Taliban officials have hinted that they plan to include former opponents in running the country, and they have left some officials of the former government in place, for now.

High-level representatives of the Taliban and the former U.S.-backed government met again on Wednesday to discuss arrangements, but predictions that they would announce an interim council proved premature.

The U.S. troop presence rose to nearly 5,000 at the airport in Kabul by late Wednesday, the Pentagon said, to provide security and coordinate the evacuation of Americans, as well as Afghans who have worked with the American-led forces and fear Taliban retribution.

In a 24-hour period from Tuesday to Wednesday, officials said, 18 of the giant C-17 military transports left the airport, carrying about 2,000 people; 325 of them were Americans, and the rest were Afghans and the personnel of other NATO countries. John Kirby, a Pentagon spokesman, said the plan is to get that up to 5,000 to 9,000 people per day ferried out from the military side of the airport.

Conditions were more chaotic on the civilian side of the airport. The Taliban, who have asked Afghans to remain in the country, allowed some who had visas and tickets to leave. But thousands of others, including entire families, have been turned away, and remain just outside the airport walls and coils of concertina wire, clamoring to get in, at times clashing with Taliban fighters.

“We intend to evacuate those who have been supporting us for years, and we are not going to leave them behind,” Gen. Mark A. Milley, the chairman of the Joint Chiefs of Staff, said Wednesday at a Pentagon news conference. “And we will get as many out as possible.”

But neither he nor Defense Secretary Lloyd J. Austin III would assure safe passage to the airport, even for Americans, saying that all the U.S. troops there were needed just to secure the airport.

“I don’t have the capability to go out and extend operations currently into Kabul,” Mr. Austin said.

The events of the last few days have made for a chaotic end to an ultimately failed 20-year attempt by the United States and its allies to defeat the Taliban and turn Afghanistan into a stable, democratic state.

The Biden administration has faced harsh criticism for not anticipating the swift fall of the government and evacuating sooner, but the president defended himself in the ABC interview.

“The idea that somehow, there’s a way to have gotten out without chaos ensuing, I don’t know how that happens,” Mr. Biden said.

On Wednesday, Representative Gregory W. Meeks, a New York Democrat and chairman of the Foreign Affairs Committee, said American troops should remain beyond President Biden’s Aug. 31 withdrawal date, if needed, to get vulnerable people out.

Canada, Britain and the United States have each said they intend to take in tens of thousands of Afghans, but the process has been slow. Many European leaders, stung by the backlash from the migrant crisis of 2015-16, have shown little interest in offering refuge to Afghans fleeing the country.

Mr. Ghani, whose location was unknown until Wednesday, said he had faced certain death at the hands of the Taliban, making reference to the fact that they hanged a former president, Mohammad Najibullah, in a public square after taking Kabul in 1996. Denying rumors that he had left with a fortune in cash, he said, “I came just with my clothes and I was not even able to bring my library.”

Looking tired and drawn, Mr. Ghani, 72, said he had every intention of returning to Afghanistan and was in touch with his predecessor, Hamid Karzai, and the former government’s chief peace negotiator, Abdullah Abdullah, who were in discussions with the Taliban.

Taliban leaders have promised to defend a free press and women’s rights, though to what extent remains unclear.

On Tuesday, the Taliban’s chief spokesman held a news conference, with women journalists present, and faced tough questions, while another spokesman gave a television interview to a female reporter.

But Ms. Van Buren, of the United Nations, said it was very hard to get a clear picture of how women were being treated around the country. In some places the Taliban were preventing women from going to work or leaving home without an escort, she said, but in other places there had been no reports of such restrictions.

On Wednesday, Shabnam Dawran, a woman who anchors a television news show on the state-owned RTA channel, said Taliban fighters had prevented her from reporting for work in Kabul.

“I was not allowed to despite having a valid ID card,” she said in a video posted on social media. “Most of my male colleagues were able to get in with their ID cards, but they warned me that you cannot go inside and you are not allowed in the job because the regime has changed. These are big challenges in front of us. If the international community is hearing my voice, they should help us because our lives are under severe threat.”