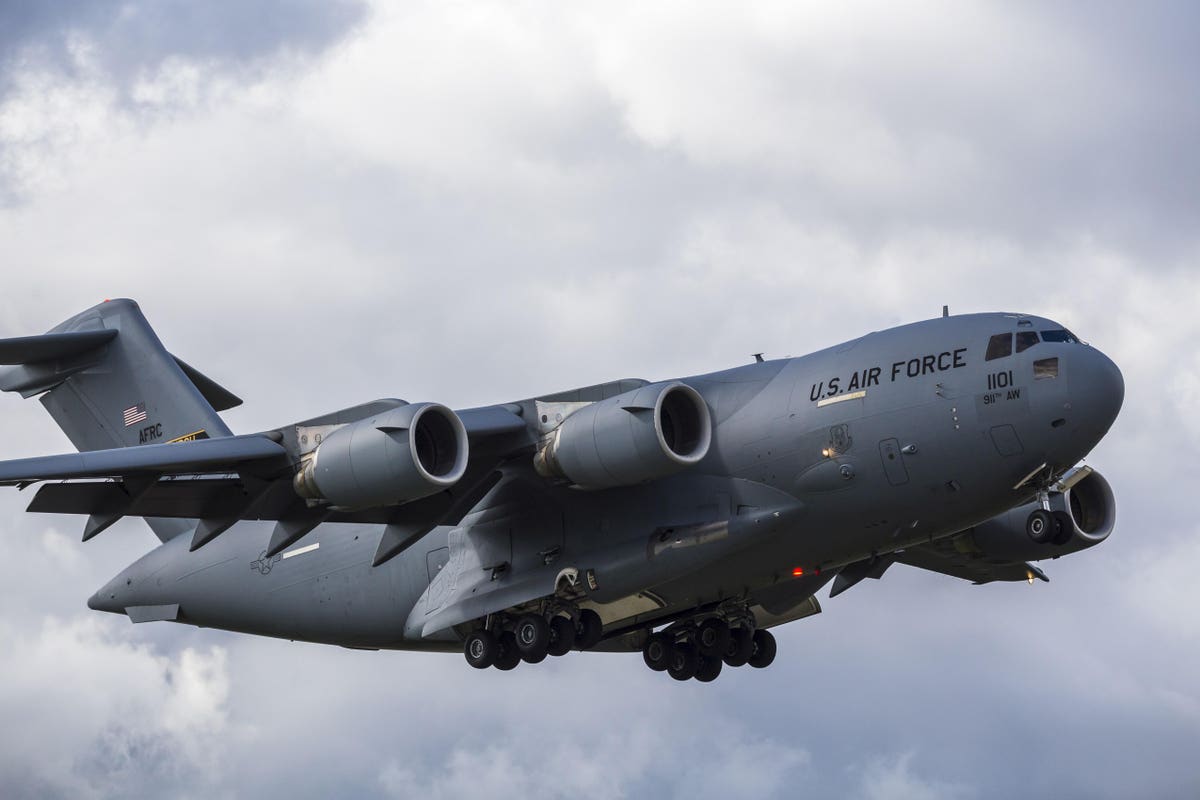 You can hear the controller’s side of the exchange in the recording below.

A C-17A Globemaster theoretically can carry a maximum 171,000 pounds of cargo, just enough for 800 persons averaging 200 pounds each. But in terms of space, it’s only designed to seat 134 soldiers with their equipment. To be sure, that capacity could be exceeded in an emergency, and The Drive notes that a C-17A reportedly once transported 670 civilian evacuees in one flight.

But if accurate, lifting roughly 800 persons in one flight is a heroic achievement of logistics, skill and sheer grit. Indeed, as RCH871 subsequently promptly received aerial refueling from an orbiting KC-135R tanker, it’s possible it took off with less than its maximum fuel load to ensure it could make it off the ground.

RCH-871 is hardly alone, however. Online flight trackers data collected by open-source researchers reveal that a full spectrum of military airlift capabilities are at work over Afghanistan in a bid to create a sustainable airbridge to evacuate tens of thousands of expatriates and Afghan allies from Kabul even as Taliban fighters secure the capital and prepare to proclaim a new government called the Islamic Emirate of Afghanistan.

These flights typically fly south through Pakistani airspace, then skirt around the coast of Iran over the Gulf of Oman and come in for landing Qatar .

The shockingly rapid collapse the Afghan military and the government in Kabul in the face of a relentless Taliban advance has led to a massive exodus of foreign workers, diplomats and military personnel in the country—well in advance of the existing plans laid down by the Biden administration and other countries to evacuate them.

Indeed, another significant flight picked up by trackers was that of CH-46E helicopter N38TU flown by the Department of State Air Wing, evacuating staff from the U.S. embassy in Kabul.

Already at least 500 U.S. embassy personnel have been flown out per NBC News, out of possibly as many as 20,000 American nationals in Kabul.

Moreover, thousands of Afghans and their families who worked alongside international military forces and aid organizations have poured into the airport, fearing retribution from the Taliban, who were infamous for their brutality and inflicting medieval-style torture and executions on those violating its fundamentalist strictures when it last ruled most of Afghanistan from 1996 through 2001.

The U.S. and other countries indeed are planning to resettle thousands of Afghans with an estimated 88,000 currently being processed for Special Immigrant Visas for their roles in assisting U.S. forces at great risk to their lives and those of their families.

Washington claims the air bridge will ramp up to flying out up to 5,000 persons per day. But as days go by, the thousands awaiting their flight to safety at the airport will also require food and water. The mounting sense of desperation the situation may engender will need to be managed to prevent disruptions of flight operations.

Already, some videos show civilians swarming around taxiing aircraft and landing helicopters, a situation which could have tragic results in more than one way.

So far, the chief workhorses of the airlift are four-engine Boeing C-17A Globemaster jets which combine excellent cargo capacity, long range and short-takeoff and landing capability. You can see a UAE Air Force C-17 taking on evacuees at Kabul below.

But the U.S.’s venerable turboprop-powered C-130 Hercules medium transports (both the H and the newer J models) are also evidently hard at work. Specialized variants such as the MC-130H and J special operations transports, and the Marine Corps KC-130J Harvest Hawk tanker/gunship have also been active in country.

But at least a numerous are flights by KC-135R and a few larger KC-10A refueling tankers, both of which frequently fulfill secondary duties as cargo carriers. In this case, the KC-135s also appear to be providing tanker support to cargo planes, and might also be ferrying fuel to the airport.

Notably, several of the Air Force’s ten specialized KC-135RT special-ops tanker variant have been active over Afghanistan, possibly used to shuffle fuel between regular KC-135s and C-130 aircraft, some of which in turn are capable of refueling helicopters.

Finally, at least two of the Air Force’s gigantic C-5M Galaxy heavy haulers have made an appearance so far. Those have a maximum capacity for 140.5 tons, or (officially) 345 troops in its upper and lower decks.

Smaller aircraft recorded shuttling into and out of Kabul include C-20, C-21 and E-11 jets, which are militarized Gulfstream III, Learjet L35A and Bombardier Global Express business jets respectively.

Other countries known to have deployed military airlift assets to evacuate nationals include:

But if the inevitable logistical bottleneck flying people out of the airport weren’t enough, there’s also of the very real danger that the tenuous lifeline could come under attack by the Taliban forces entering Kabul.

Unfortunately, on August 16 the U.S. embassy noted “There are reports of the airport taking fire; therefore we are instructing U.S. citizens to shelter in place.” Videos posted August 17 suggest the pressure is real.

Ironically, to pull out of Afghanistan the U.S. military is going back in to Afghanistan, with 6,000 Soldiers and U.S. Marines in the process of deploying to secure the airport to carry out the evacuation, with thousands more standing by in reserve.

The troops deployed to secure the evacuation include:

Meanwhile, 1,000 more troops in Qatar will assist in processing evacuees.

The evacuation effort is also receiving air cover that is unreported by flight trackers. Prior to Kabul’s surrender, the U.S. warplanes conducted strikes in an effort to slow the Taliban advance, using AC-130 gunships, B-52 bombers, MQ-9 Reaper drones, and carrier-based FA-18 Super Hornet fighters.

Undoubtedly, some of those longer-endurance assets are being rotated on station over Kabul. Flight tracker records do show at least one AC-130W Stinger II gunship landing at Kabul.

The British Army has also flown over hundreds of soldier to protect the evacuation. Turkey meanwhile hopes to negotiate an agreement with the Taliban to operate the airport, including deploying troops for its security.

Clearly, the evacuation via Kabul’s airport will take some time to complete. One can only hope the massive undertaking will proceed without needless violence or tragic mishap.