For Afghan Women, Fears of a Return to a Repressive Past 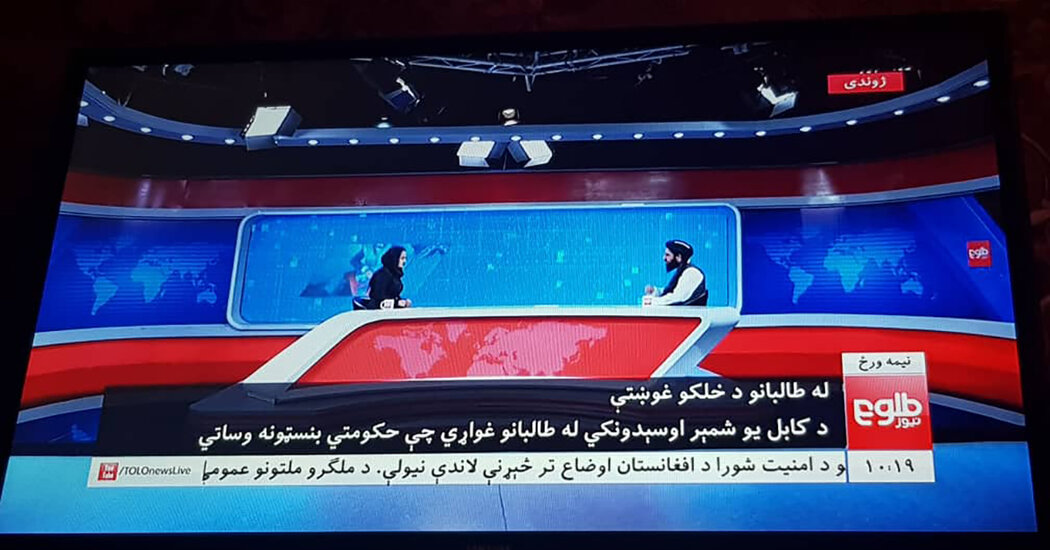 As Afghan women remained cloistered at home in Kabul, fearful for their lives and their futures, a starkly different image played out on Tuesday on Tolo News, an Afghan television station: a female presenter interviewing a Taliban official.

Sitting several feet away from Mawlawi Abdulhaq Hemad, a member of the Taliban’s media team, the host, Beheshta Arghand, asked him about the situation in Kabul and the Taliban’s conducting house-to-house searches in the Afghan capital.

“The entire world now recognizes that the Taliban are the real rulers of the country,” he said, adding: “I am still astonished that people are afraid of Taliban.”

But many are deeply fearful, among them the millions of Afghan women who are afraid of a return to a repressive past, when the Taliban were in power from 1996 to 2001, and barred women and girls from taking most jobs or going to school. In 1996, a woman in Kabul had the end of her thumb cut off for wearing nail varnish, according to Amnesty International. In recent months, some women have been flogged by Taliban fighters for having their faces uncovered.

In the two decades after the U.S. invasion toppled the Taliban, the United States invested more than $780 million to encourage women’s rights. Girls and women have joined the military and police forces, held political office, competed in the Olympics and scaled the heights of engineering on robotics teams — things that once seemed unimaginable under the Taliban.

Now, however, a central question remains: Will the Taliban once again trample over women’s rights with the same velocity they captured the country?

The Tolo News interview was part of a broader campaign by the Taliban since taking power to present a more moderate face to the world and to help tame the fear gripping the country. They are encouraging workers back to their jobs — and have even encouraged women to return to work and to take part in the government.

“The Islamic Emirate doesn’t want women to be victims,” Enamullah Samangani, a member of the Taliban’s cultural commission, was quoted as saying by The Associated Press, using the militants’ name for Afghanistan. “They should be in the government structure according to Shariah law.”

Still, worried about running afoul of local Taliban officials, many women have remained shuttered at home. Kabul residents have been tearing down advertisements showing women without head scarves in recent days. In some areas of Afghanistan, women have been told not to leave home without being accompanied by a male relative, and girls’ schools have been closed.

And, despite their pledges of no reprisals, there have already been reports of Taliban seizing property, hunting down government workers and journalists and attacking crowds of civilians.

At the same time, the Taliban was showing indications that it was, at least for the moment, adopting a more tolerant stance regarding the role of women and girls. Unicef, the United Nations’ children’s organization, said one of its representatives met a health commissioner on Monday in Herat and reported that he requested that women who work for the health department to return to work.

But Unicef also reported mixed messages on questions of education for girls: in some areas, local Taliban authorities said they were waiting for guidance from leaders, in others they said they wanted schools for boys and for girls up and running.

The United Nations secretary general, António Guterres, said on Monday that his organization was “receiving chilling reports of severe restrictions on human rights” throughout the country. “I am particularly concerned by accounts of mounting human rights violations against the women and girls of Afghanistan,” he said at an emergency meeting of the Security Council.

That made the work of Tolo’s female journalists, including a reporter out on the street, all the more notable.

Matthieu Aikins, a journalist who has reported widely on Afghanistan, described the Tolo interview as “remarkable, historic, heartening,” although he pointed out that during recent peace talks in Qatar, the Taliban had given access to female journalists from Afghanistan and other countries.

Afghanistan observers said that while it is not unheard-of for the Taliban to grant interviews to female journalists, including international correspondents from CNN and other outlets, they are rare inside the country.

The Taliban leadership appears to be carefully tending to the group’s public image, even as its members continue to preach a policy of exclusion that deprives women of rights and education inside the country.

The notion that the Taliban will suddenly change their ways has been greeted with deep skepticism.

“Please spare a thought for the people women and girls of Afghanistan,” Phumzile Mlambo-Ngcuka, the executive director of U.N. Women, wrote on Twitter on Monday. “A tragedy unfolds in front of our eyes.”

Tolo News has been an independent force in the Afghanistan news media landscape, showing soap operas and reality shows that run counter to the Taliban’s conservative ethos.

After their recent capture of Kabul, the Taliban entered Tolo’s news compound, collecting all state-issued weapons, and offering to help secure the compound.

Saad Mohseni, the chief executive of Moby Media Group, which oversees Tolo News, told the BBC that the Taliban had been professional and polite. But he said he suspected that his station’s content, especially entertainment, would face eventual censorship.

“The Taliban are scrambling to take control,” he said.