For Meghan, an Image Rendered in a U.K.-U.S. Split Screen 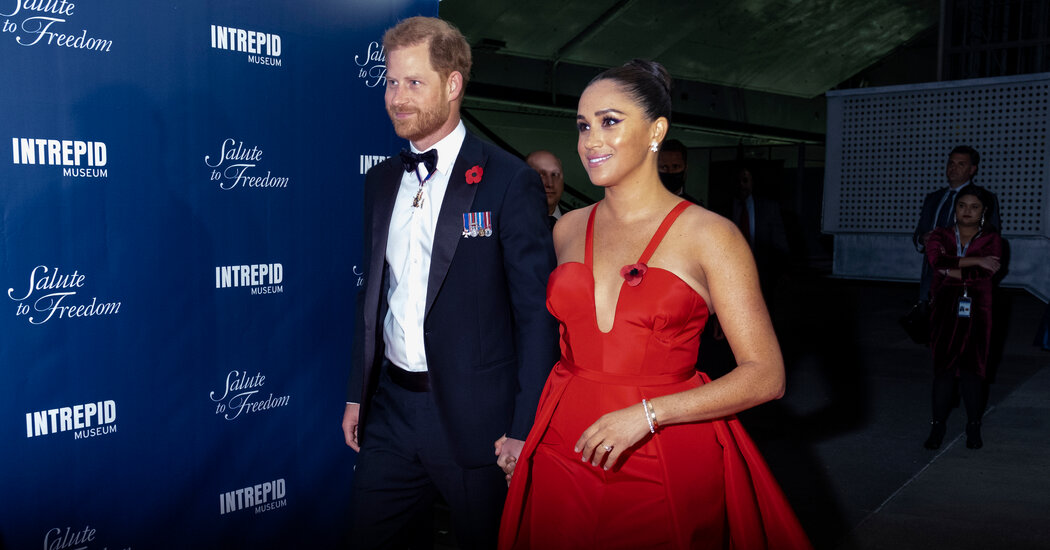 LONDON — When Prince Harry and his wife, Meghan, stepped out last week at a gala for veterans in New York City, the beaming, beribboned prince declared he was “living the American dream.” That might be even truer of Meghan, who has restyled herself since leaving Britain last year as a philanthropist, multimedia entrepreneur and outspoken campaigner for family leave rights.

Even as they were taking Manhattan, though, Meghan was shadowed by the couple’s old life in London. She was forced to apologize for erroneous statements she made in a lawsuit against a British tabloid, The Mail on Sunday, for violating her privacy by publishing a letter she had sent to her father.

Meghan said it was a case of faulty memory. But the tabloids, which have been at war with the couple since before they abandoned Britain for Southern California, leapt on the admission. “Little Miss Forgetful,” said The Sun, above an unflattering caricature of Meghan, drawn from “Little Miss,” an English children’s book series.

Rarely has the contrast between Meghan’s present and past lives been so stark. Nine months after she and Harry gave a sensational interview to Oprah Winfrey in which Meghan accused the royal family of callous and racist treatment, she has re-emerged in the United States as a formidable mix of A-list celebrity, business owner, investor and social activist. Some speculate about a political future.

In Britain, however, Meghan remains a polarizing figure. She is admired by some, particularly the young, for having brought a breath of fresh air into the musty House of Windsor, but reviled by many others, not least the tabloids, which cite her misstatement as evidence of a broader pattern of duplicity and manipulative behavior.

“The majority of people are fed up, to the back of the teeth, with them,” said Penny Junor, a royal historian. “They said they wanted privacy, but then they never stopped looking for attention. And now, all these months later, we’ve had this discovery that she’s been lying to the court, or failing to remember.”

None of this particularly matters in the United States, Ms. Junor was quick to acknowledge. If anything, the split-screen images of the past week have vindicated the couple’s decision to leave the realm behind.

Harry and Meghan have been able to control their image much more effectively in the United States than in the tabloid-dominated British media. She has injected herself into the American political debate in a way that would have been inconceivable in Britain, where members of the royal family scrupulously avoid politics.

“We tolerate success in this country, but we don’t celebrate it,” Ms. Junor said. “In America, they glorify success.”

Meghan, also known as the Duchess of Sussex, addressed that difference in an interview with The New York Times on Tuesday, though she put it in the context of gender bias rather than culture. Speaking to Andrew Ross Sorkin at the DealBook Online Summit, Meghan said ambition was a “trigger word” when applied to women.

“How have we culturally allowed that to be the case?” Meghan said. “There’s nothing wrong with talking about a woman’s success, or her ambition, or her financial prowess.”

Since settling in a sprawling, Mediterranean-style house in Montecito, Calif., Meghan and Harry have signed lucrative programming deals with Netflix and Spotify; launched a philanthropic and advocacy organization, Archewell; and become partners in an asset management firm, Ethic, which invests in companies viewed as socially responsible.

Meghan has held forth on her management style, glossing over the high turnover of staff and reports, which she has denied, that she bullied aides when she and Harry lived in Kensington Palace.

Both have raised eyebrows in Britain by wading into American politics. Harry recently told a technology conference that he warned the chief executive of Twitter, Jack Dorsey, in an email the day before a mob attacked the United States Capitol on Jan. 6, that “his platform was allowing a coup to be staged.”

Meghan has been cold-calling senators — among them Susan Collins, Republican of Maine — to lobby for paid family leave, which many Democrats want to include in President Biden’s pending social safety-net bill. British papers made much of the fact that she identified herself to the lawmakers as “the Duchess of Sussex.”

“I don’t see this as a political issue,” Meghan said of her campaign. “Paid leave, from my standpoint, is just a humanitarian issue.”

The duchess has not entirely forsaken Britain. During her interview, she wore a red poppy pin, a common fall custom in Britain that commemorates fallen soldiers. When asked about her legal case, Meghan avoided details, except to note that she had won a ruling against The Mail.

“It’s just me standing up for what’s right,” she said.

The trouble is, Meghan admitted she erred in telling the court that she had not cooperated with the authors of a flattering book about the couple. Her former communications secretary, Jason Knauf, turned over emails showing she supplied him with bullet points to give to the authors, Omid Scobie and Carolyn Durand, including details about her ruptured relationship with her father, Thomas Markle.

“I apologize to the court for the fact that I had not remembered these exchanges at the time,” Meghan said in a witness statement. “I had absolutely no wish or intention to mislead the defendant or the court.”

A spokeswoman for the duchess declined to comment further.

All of this is somewhat peripheral in a case that turns on whether The Mail on Sunday invaded her privacy by publishing the private letter to her father. The Mail, which obtained the letter, argues that Meghan, as a public figure, should not have expected it would remain confidential.

It was not clear how her admission would affect the broader case: The Mail’s publisher, Associated Newspapers, is appealing after Meghan won a summary judgment last February.

Still, the disclosures paint a portrait of a duchess who seemed anything but naïve about her public image in the turbulent months after her marriage to Harry in May 2018.

Mr. Knauf said the duchess sent him a draft of the letter to her father to review, with the notation, “obviously everything I have drafted is with the understanding that it could be leaked so I have been meticulous in my word choice.”

Meghan, he said, even asked whether addressing Mr. Markle as “Daddy” would be a smart P.R. strategy.

“Given I’ve only ever called him daddy,” she wrote, “it may make sense to open as such (despite him being less than paternal), and in the unfortunate event that it leaked it would pull at the heartstrings.”