France Calls for Vigilance After Vandalism at Vaccine Sites 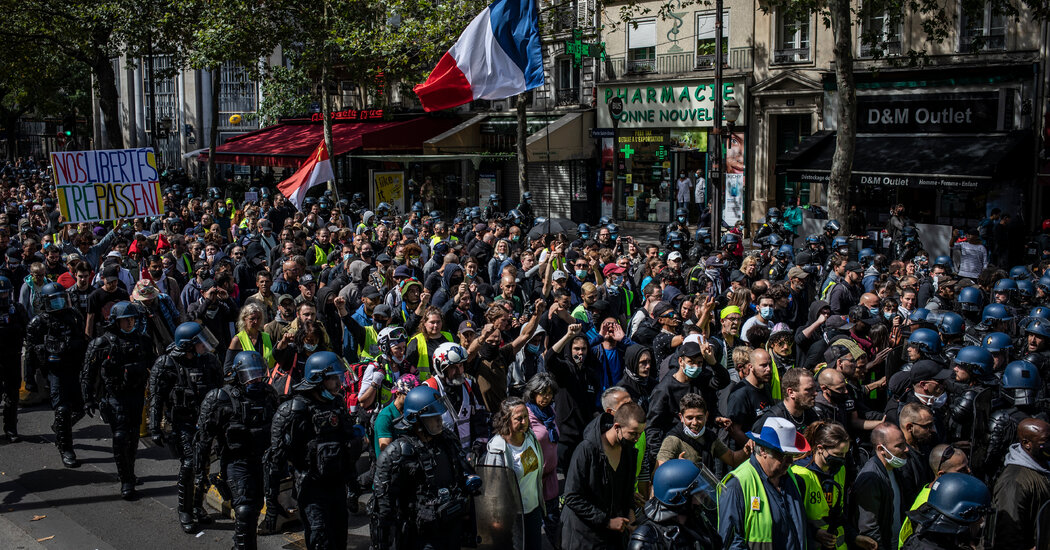 A vaccination center in southeastern France inundated with a fire hose, its walls vandalized with words equating vaccines with “genocide.”

A piece of paper found in a vaccination center in Toulouse, France, with a message: “One day all this will blow up.”

These episodes were highlighted in the French news media this week as France’s interior minister, Gérald Darmanin, called for the police to increase their surveillance at vaccination sites and pharmacies across the country. The ministry said there had been 22 cases of vandalism since July 12, at a time when tens of thousands of people have taken to the streets to protest against the government’s Covid-19 health pass policy.

Under the policy, people are required to present paper or digital proof of being fully vaccinated, a recent negative test or recent Covid-19 recovery to attend large events in stadiums and concert halls, and to enter cinemas, museums and theaters.

The health pass is also required to participate in other more prosaic but beloved aspects of French daily life, such as having a coffee at a cafe, devouring boeuf bourguignon at a restaurant or taking an intercity train.

While the protests have been vocal, recent polls show that a majority of French people support the health pass policy, while a surge in the number of vaccinations also suggests that it has proved to be effective.

Similar demonstrations have taken place in Italy against what some protesters complain is the coercive encroachment of the state into their lives in a bid to stave off rising infection rates.

Olivier Véran, the French health minister, this week expressed his support for health care workers battling the coronavirus, writing to them that no violence or intimidation would be tolerated.

“Attacking our health care professionals is an attack on the nation,” he wrote in a letter.