From ‘Alive Among the Dead,’ to ‘Dead Among the Living’ 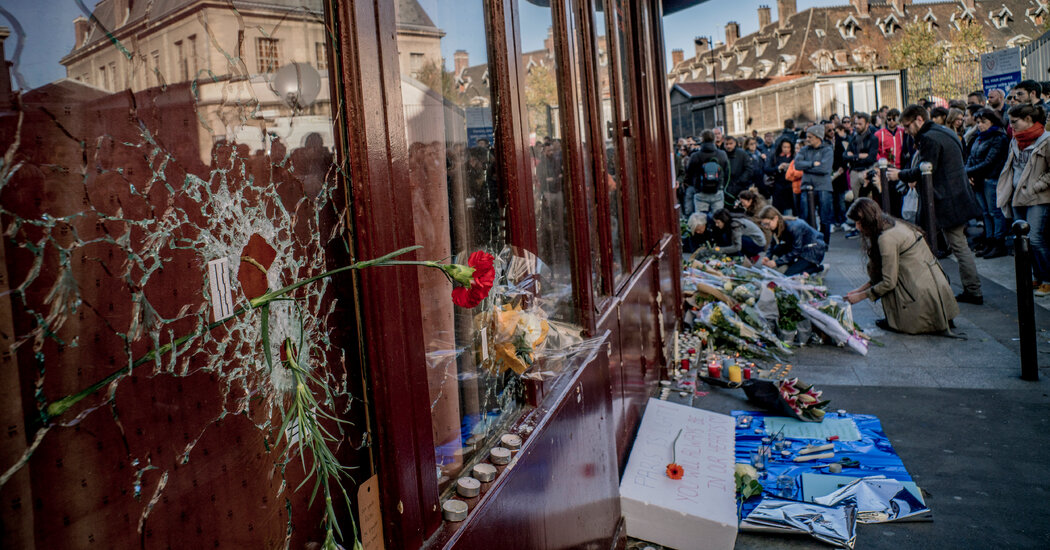 PARIS — One by one, day after day, week after week, a steady stream of witnesses walked up to the stand.

They fiddled with their face masks or shuffled notes. Adjusted the microphone, some with trembling hands. Stared at the ceiling of the brand-new, brightly lit courtroom to steel themselves or hold back a tear.

For over five weeks in October and November, at a courthouse in central Paris, more than 300 survivors and members of bereaved families testified at a trial over the Nov. 13 terrorist attacks in and around the French capital in 2015. One hundred and thirty people were killed, and hundreds were physically or mentally scarred. The attacks inflicted lasting trauma on France’s collective psyche.

The hushed courtroom listened to gut-churning recollections of the shootings and suicide bombings — carried out by Islamic State extremists at the national soccer stadium, on restaurant and cafe terraces, and at the Bataclan concert hall — and to heart-wrenching accounts of lives that were shattered.

The plaintiffs were rarely interrupted. (Many asked that reporters in court not use their last names.) Judges, prosecutors and lawyers asked few questions. The accused remained mostly silent. Dozens and dozens of journalists typed away.

Sophie Dias, 39, told the court she was in Portugal preparing for her wedding when news of the attacks broke. She repeatedly called her father, Manuel Dias, a bus driver who had taken fans to the stadium. Mr. Dias, the only person killed there, never picked up.

Gaëlle, 40, told the court how, laying on the floor of the Bataclan with her cheek blown off by a bullet, she had to remove dislocated teeth from her mouth to avoid coughing and attracting a gunman’s attention. She underwent her 40th surgery in August.

Maya, 33, told the court she lost her husband and two of her best friends at the Carillon cafe, their Friday meeting spot. The assailants sprayed the terrace with bullets, hitting her legs as she crouched for cover between the gutter and a car.

“My head is held high, but I am exhausted,” she said. “I rebuilt myself, but now I would like to live.”

Emotions ran high. The audience hung on every shuddering sob, every excruciating detail, every devastating anecdote, every display of horror, grief, resilience, anger and hope.

Only a fraction of the 2,400 plaintiffs decided to testify at the trial, where 20 men stand accused, mostly of complicity in the attacks. Others want nothing to do with the proceedings.

But for those who testified, it was to explain or better understand what happened, to confront their trauma or the accused, to reclaim their stories and their grief after years of slogans and politicizing that followed the attacks. To take another step toward rebuilding their lives.

Lydia Berkennou, 32, escaped the Bataclan by crawling on a floor that was wet with blood. She had told her story publicly before, but taking the stand was different.

“Like a bungee jump into the void,” she said.

She hopes to better understand each suspect’s involvement but found the trial emotionally taxing. The sound of gunfire recently came to her in a flashback for the first time in months.

“But I also know that when I slept that night after testifying, it felt like I had been freed from something,” she said.

To help plaintiffs cope with the psychological impact of the trial, volunteers in sleeveless blue vests from Paris Aide aux Victimes, a victim aid group, are at the courthouse.

“There are emotions, suffering, anxiety,” said Carole Damiani, a psychologist who is president of the group. “The goal is to cushion that as much as possible.”

The court showed almost no crime scene pictures and played only short audio or video clips from the Bataclan. Added up, however, hundreds of testimonies painted nightmarish scenes.

Virginie remembered falling to the ground of the Bataclan’s mosh pit when the shooting started. She crawled with a “collective rippling” of people trying to escape and had to climb an “Everest of piled up bodies” to exit.

Antoine Mégie, an expert on terrorism laws and legal cases at the University of Rouen, said the trial was a test of how courts could handle thousands of plaintiffs and extremely violent “scenes of war.” A trial for the 2016 truck attack in Nice, which killed 86, is expected next year.

“These testimonies were also a way to embody the victims of an attack that often goes far beyond them,” Mr. Mégie said. “Nov. 13 was an attack on France. The victims are sometimes overwhelmed by that aspect of things.”

Mr. Dénouveaux, from Life for Paris, said terrorism targeted victims “as a stand-in for the whole nation, to scare people, like a sacrificed animal.”

But the trial was a way for survivors to flip that, to be actors of their fate — real people with complex lives, not faceless symbols caught up in a national trauma.

“You share your experience willingly on the stand,” Mr. Dénouveaux said. “Even the decision not to testify is a kind of action.”

Despite their ordeal, most plaintiffs expressed no hate. Only a handful lashed out, like the father of a lighting technician killed at the Bataclan who conveyed both loathing of the accused and deep sadness — six years later, he still pays his daughter’s phone bill to hear her voice mail recording.

Many testimonies struck a similar chord.

Bereaved families remembered frantically calling emergency hotlines; being glued to the television; saying goodbye, one last time, from behind a glass window at the Paris police morgue. Through lawyers, several asked investigators and medical experts who testified whether a loved one had suffered, or where exactly they had died.

Survivors recalled chaos when gunfire suddenly erupted on that balmy November evening, then the feeling that they had been irrevocably unmoored from reality, unable to focus or enjoy life.

“I made it out alive among the dead,” one survivor said. “But now I am dead among the living.”

Some victims found community. Several former hostages from the Bataclan — where the assailants holed up for hours in a narrow corridor before police launched the assault in a deluge of gunfire and explosions — have grown close.

Guillaume Delmas, 50, is still processing feelings of guilt from that night, when he saw a friend die at the Bataclan and fled without his wife, who survived. He doubts his testimony will change the trial’s outcome, and is frustrated that people often see him as a victim first and foremost.

“All the things that make you human, a good person or a bad person, a genius or a fool, all of that disappears completely,” he said.

Still, taking the stand was a relief for Mr. Delmas, who used to be a producer at an advertising firm and now works on his own projects, spending as much time away from Paris as he can.

Testifying was “like removing one of the heavy stones we’ve been carrying on our backs for the past six years,” he said.

But every burden is different.

Sophie, a plaintiff whose partner died after six agonizing days from injuries suffered at the Bataclan, noted that for the rest of the world, he was the 130th victim — a mere number. “Your dead is no longer yours,” she told the court with a hint of bitterness, eyes reddened by tears.

But the family of Guillaume Valette, who was so traumatized by his experience at the Bataclan that he killed himself two years later, found solace when he was officially recognized as the 131st victim. “For us, that number is important,” Guillaume’s brother testified.

One of the most striking accounts came from Aurélie Silvestre, who told the court that she had become an “athlete of grief.” When her husband was killed at the Bataclan, she was pregnant with their daughter.

Reading from notes with poise, through gold-rimmed glasses, Ms. Silvestre said that the girl, now 5, struggles to understand the sadness that sometimes grips their family.

“She thinks that after death we all meet again, so she waits,” Ms. Silvestre said. “Sometimes, I hear her whisper ‘Papa’ in her room.”