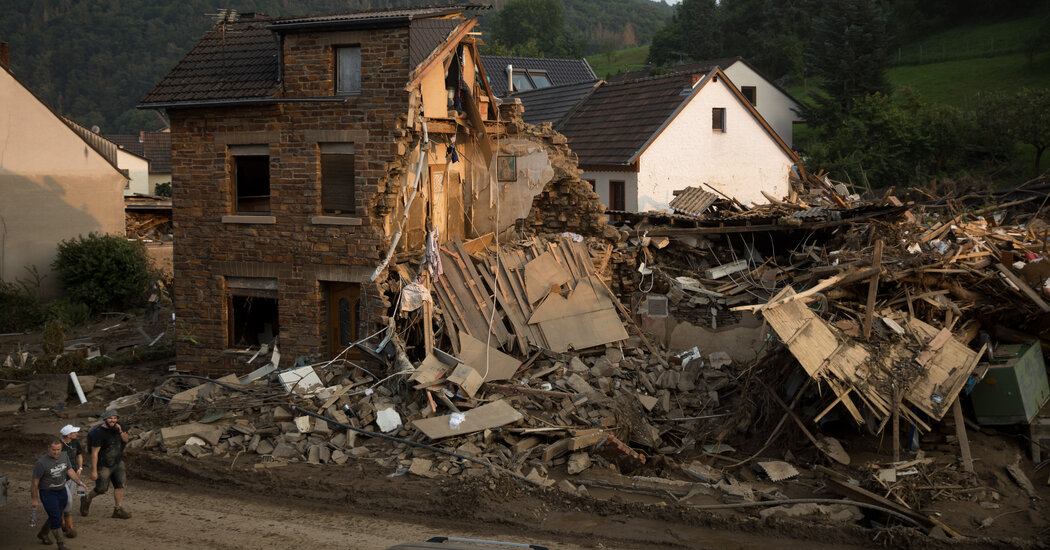 BERLIN — Floods have had a way of reshaping German politics.

Helmut Schmidt made a name for himself responding to deadly floods in Hamburg in 1962, and went on to become chancellor in the 1970s. Images of Gerhard Schröder wading through muddy water along the Elbe River in 2002 are credited with helping him win another term.

The floods that ravaged Germany last week — more severe than any in centuries — are already doing their work in this election year. But the striking thing they have revealed, political analysts say, is that none of the major candidates has been able to demonstrate the level of leadership in a crisis the public has grown accustomed to under Chancellor Angela Merkel.

While the deadly flash floods have offered the candidates a chance to show their stuff, political experts said that each has struggled to communicate competence and reassurance. Voters seem to agree.

The first poll since the flooding showed a drop in popularity for the two leading candidates — the conservative Armin Laschet and his Green party rival, Annalena Baerbock — after what political experts say have been lackluster performances by both this week.

“This will not be an election in which the candidates play a deciding role,” said Uwe Jun, a professor of political science at the University of Trier. “None of the candidates have the kind of overwhelming charisma that is able to fully convince voters.”

The floods have killed 170 people, with more than 150 still unaccounted for, the police said on Wednesday. The number of missing is significantly lower than figures announced last week, when downed communication networks and blocked roads rendered many people unreachable.

In the latest polling, which was carried out from Tuesday to Sunday, Mr. Laschet’s leading Christian Democratic Union dipped below 30 percent support, to 28 percent, while their main rivals, the second-place Greens, held steady at 19 percent.

When asked if they could vote for an individual candidate (Germans cast votes only for parties), which one would receive their endorsement, only 23 percent said Mr. Laschet, according to the survey by the Forsa polling group.

On Saturday, Mr. Laschet came under fierce public criticism after he was caught on camera chatting and laughing with colleagues, while President Frank-Walter Steinmeier was giving a solemn statement to reporters after the two had met with flood victims in the city of Erftstadt.

Mr. Laschet, 60, who is the governor of North Rhine-Westphalia, was forced to apologize. On Tuesday he visited another devastated town alongside the chancellor.

If there is one thing Ms. Merkel has learned in her four terms in offices, it is how to be calm in the face of calamity — whether pledging to keep Germans’ savings safe in 2008, or wading through the flooded streets of eastern Germany five years later.

Standing beside her Tuesday after meeting with volunteers in the city of Bad Münstereifel, Mr. Laschet tried a more statesmanlike tone. He offered an open ear and a supportive clap on the shoulder to people cleaning the mud and debris from their homes, as well as condolences for victims.

“Nothing we can do can bring them back, and we barely have words for the suffering of those who survived,” he said, pledging to double his state’s contribution to emergency aid. “So that we, too, are doing our part,” he said.

Ms. Merkel’s government on Wednesday approved a 200 million euro, or $235 million, package of emergency assistance to be paid out to flood victims immediately. That figure will be matched by the affected states.

An estimated 6 billion euros, $7 billion, will be needed to repair the infrastructure that has been damaged, including roads, bridges, homes and buildings.

Much of that money will flow through the finance ministry run by Olaf Scholz, a Social Democrat, who is also running for chancellor. Getting financial aid to people quickly could give him an edge, but so far he has failed to translate his position into a political advantage, experts say.

“If we need more money, then we will make it available,” Mr. Scholz, 63, told reporters in Berlin, “We will do what we have to do to help everyone who needs it.”

Mr. Scholz visited stricken communities in Rhineland-Palatinate last week and then headed to the southern state of Bavaria just days after the heavy rains stopped there. But he has failed to connect with voters in a meaningful way, experts said. His party gained only 1 percentage point in the most recent survey and Mr. Scholz’s personal popularity remained unchanged.

“He is a candidate that people just can’t really warm up to,” Mr. Jun said.

But if any party should be in a position to find a political advantage in the events of the past week, it should be the Greens, who have been pushing for Germany to speed up its transformation to a green economy for decades.

Especially popular among the country’s younger voters, climate issues have helped the Greens to replace the Social Democrats as the second most popular party in recent years. But after their candidate for chancellor, Ms. Baerbock, 40, stumbled over accusations of plagiarism in a recently published book and inaccuracies on her résumé, even a deadly weather catastrophe appeared unable to lift the party’s standing significantly.

The Greens remained firmly in second place, according to the most recent poll, with 19 percent support — enough to create a majority if they were to agree to join forces in a government led by Mr. Laschet’s conservatives, in a tie-up that many observers believe would be the most likely coalition.

Making Ms. Baerbock’s position more difficult is the fact that she currently does not hold a political office that would give her the opportunity to make a public visit the stricken regions, as do both of her competitors.

Last week she decided against taking members of the news media with her when she visited communities in Rhineland-Palatinate afflicted by the severe weather.

In several interviews afterward, Ms. Baerbock called for Germany to move more quickly on its exit from coal, currently planned for 2030 and to increase spending to better prepare communities for the dangers posed by extreme weather. She also laid out a three-point plan that included adapting to the changing climate, amid attempts to halt it.

“This is not an either-or between climate precaution, climate adaptation and climate protection, but a triad that is actually decided in the same way in all the climate protection treaties worldwide,” Ms. Baerbock told ARD public television.

In the wake of last week’s flooding, the Greens are no longer the only party making such calls, but as the images of devastation retreat from the headlines, her party remains in the strongest position gain voters from the renewed focus on the threat posed by changes to the world’s climate.

“I assume that the weather events will indeed raise the issue of climate change to the top of the electorate’s agenda, which will help the Greens,” said Ursula Münch, director of the Academy of Political Education in Tützing, but added that it would not be enough of an advantage to close the gap with the leading conservatives. “It still won’t help Ms. Baerbock into the chancellor’s office.”

What You Need to Know About Germany’s National Election