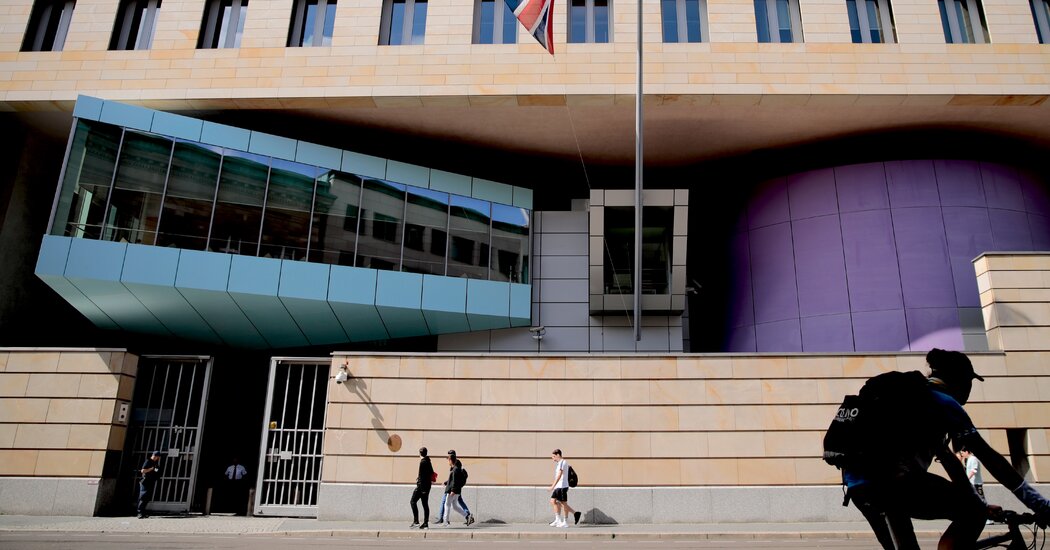 BERLIN — An employee of the British Embassy in Germany has been detained on suspicion of slipping documents from his workplace to Russian intelligence, Germany’s federal prosecutor said on Wednesday in the latest case of suspected espionage involving agents from Moscow.

The man, who is a 57-year-old British citizen identified only as David S. in keeping with German privacy laws, was detained on Monday in Potsdam, the prosecutor said in a statement. The authorities said that they suspected he had been working as a spy since at least November and that he was suspected of handing over documents from the embassy to a member of Russia’s intelligence agency in exchange for an undisclosed amount of cash.

The arrest is the latest in a spate of detentions as German authorities move against Russian agents. Germany’s domestic intelligence service has grown increasingly concerned that Moscow is stepping up its efforts to win over Western collaborators to gain information about the country’s economic, political and strategic positions, as well as those of the European Union.

Much of the focus has been on the threat of cyberespionage after hackers linked to Russia were suspected of breaching the German government’s main data network and the country’s Parliament. But experts in Germany say that Moscow is again employing old-fashioned human contact to gather intelligence.

Given its prominent role as Europe’s largest economy, Germany has become an interesting target for espionage by agents from Russia, as well as China, Turkey and Iran, the authorities say.

Thomas Haldenwang, who heads Germany’s domestic intelligence agency, told Parliament last year that the level of espionage had reached, if not exceeded, the levels during the Cold War, when a divided Germany was at the forefront of a geopolitical divide between the U.S.-led democratic West and the Soviet-controlled communist East.

Germany’s longstanding relationship with Russia has been shaped by deep cultural and economic ties going back centuries, and by devastating wartime battles that have left relations wavering from increased cooperation to bitter recriminations.

The poisoning of Aleksei A. Navalny, the Russian opposition leader whom President Vladimir V. Putin of Russia allowed to be flown to Berlin for treatment, only to jail him upon his return to Russia months later, reflected the complexity of the ties.

Chancellor Angela Merkel of Germany condemned the attack on Mr. Navalny, calling it an “attempted murder.” But she refused to take steps to prevent the completion of a strategic natural gas pipeline linking Russia directly with Germany in response. The pipeline, Nord Stream 2, is expected to be completed by the end of the year.

In a brochure published in 2016 and aimed at students and researchers in the sciences, Germany’s Office for the Protection of the Constitution warned that anyone who speaks good Russian and is pursuing careers in the diplomatic service, energy or finance could be potential targets for Russian agents. It detailed some of the tactics that they may use, including building up a personal relationship before asking for information.

In June, German police detained a 29-year-old Russian man working as a research assistant in the science department of a university in Germany. German authorities said the man had slipped information from his workplace to a member of the Russian intelligence agency in exchange for cash at least three times.

A German businessman was detained in May in the city of Leipzig on suspicion of illegally exporting industrial machines to a company in Russia, where they wound up in the hands of a defense company.

Both suspects remain in pretrial detention pending the outcome of an investigation. A judge will decide later Wednesday whether to detain David S., whose home and workplace were searched.

Italy expelled two Russian diplomats on accusations of espionage in March, after investigators say they observed an Italian Navy official giving the envoys classified documents in exchange for money. The police said they also retrieved secret NATO documents believed to have been handed over to the Russians in previous meetings with the Italian.