Greek Island Is New Epicenter of Europe’s Summer of Calamity 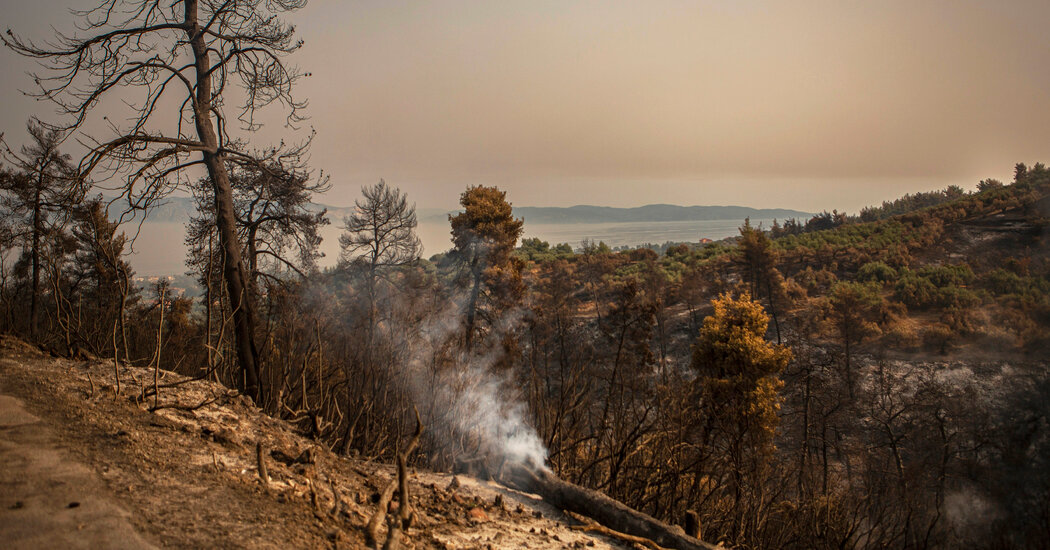 EVIA, Greece — Amid twisted cages and scorched trees, Harilaos Tertipis stepped out of his ruined stables dragging the charred corpses of his sheep — burned, like so much else, in the wildfires that have raged across Greece.

As the survivors of his flock huddled together on a roadside hill below, the bells on their necks clanging and their legs singed, he said that if he had stayed with his animals instead of rushing home to protect his family and house, “I wouldn’t be here now.”

As of Wednesday, the fires around the northern parts of Evia, Greece’s second-largest island, had destroyed more than 120,000 acres of pine forest, razed homes and displaced hundreds of people. They have brought assistance from more than 20 countries and been declared “a natural disaster of unprecedented dimensions” by the Greek prime minister.

The fires, fueled by a record-breaking heat wave that has touched temperatures of up to 46 degrees Celsius, or 115 degrees Fahrenheit, have caused political recriminations, economic disaster and biblical scenes of destruction.

But they seem less a random act of God than another inevitable episode of Europe’s extreme weather brought on by the man-made climate change that scientists have now concluded is irreversible.

Europe has always considered itself a climate leader, last month pledging to cut emissions by 55 percent over the next decade and calling this “a make-or-break moment” for the planet “before we reach irreversible tipping points.”

But a string of disasters this summer has left many to wonder whether that tipping point is already here, driving home the realization that climate change is no longer a distant threat for future generations, but an immediate scourge affecting rich and poor nations alike.

Beyond the fires that have raged in the American West, or in Turkey and Algeria, virtually no corner of Europe has been untouched by a bewildering array of calamities, whether fire, flood or heat.

Sweltering temperatures have set off wildfires in Sweden, Finland and Norway. Formerly once-in-a-millennium flooding in Germany, Belgium, Switzerland and the Netherlands killed at least 196 people. Places in Italy hit more than 118 degrees this week, while parts of the country were variously scorched by fire, battered by hailstorms or inundated by floods.

But the shifting epicenter of natural disaster has now fallen on Evia, a densely wooded island northeast of Athens, once best known for its beekeepers and resin producers, its olive groves and seaside resorts, and now a capital of the consequences of a warming planet.

This week, as firefighters scrambled to put out rekindling fires and helicopters dropped seawater to sate licking flames, acres of burned hillsides and fields lay under white ash, as if dusted with snow.

I drove through winding roads riddled with fallen trees and electric wires. Smoke hung low, like a thick fog. The trunks of mangled trees still smoldered and the hive boxes of beekeepers looked like burned end tables abandoned in empty fields. Miles away from the fires, the smoke still left an acrid taste in my mouth. Ash drifted around cafes where waitresses constantly watered down tables and the sun imbued the dense haze with a sickly orange hue.

“We lived in paradise,” said Babis Apostolou, 59, tears in his eyes as he looked over the charred land surrounding his village, Vasilika, on the northern tip of Evia. “Now it’s hell.”

This week, the fires covered new ground. In the southern Peloponnese, where wildfires killed more than 60 people in 2007, a long stretch of fire tore through forest and houses, prompting the evacuation of more than 20 more villages. But many Greeks have refused to leave their homes.

When the police told Argyro Kypraiou, 59, in the Evia village of Kyrinthos to evacuate on Saturday, she stayed. As the trees across the street blazed, she fought the airborne barrage of burning pine cones and flames with a garden hose. When the water ran out she beat back the fire with branches.

“If we had left, the houses would have burned,” she said across from the still smoldering ravine. A truck rolled by and the driver leaned out the window, shouting to her that there was another fire in the field behind her house. “We keep putting out fires,” she shouted back. “We don’t have any other job.”

Kyriakos Mitsotakis, the prime minister of Greece, has called the recent days “among the hardest for our country in decades” and promised to compensate the afflicted and reforest the land. Residents across the seared north of Evia complained that the government had failed to fly water-dropping aircraft out to them fast enough or that it had waited too long to ask the European Union for help.

Greece’s top prosecutor has ordered up an investigation into whether criminal activity could possibly have sparked the fires, perhaps to clear land for development. Many here blamed mysterious arsonists for starting the fire.

“This is arson,” said Mr. Apostolou. “I had heard they want to put in wind turbines.”

Mr. Tertipis said, “I hope the person who set these fires will suffer as much as my animals.”

But it was also possible that the finger-pointing at arsonists stemmed from a feeling of powerlessness and the need to blame someone — anyone — for a crisis that at least some acknowledged was everyone’s fault.

“We all have to make changes,” said Irini Anastasiou, 28, who expected the fires to keep happening around the world as the planet warmed. She looked out from the front desk of her now empty hotel in Pefki, one of the hardest-hit towns, and saw an opaque wall of haze over the sea.

“Usually, you see clear across to the mountains,” she said. “Now you can see nothing.”

The residents of Evia did what they could. In the town of Prokopi, volunteer firefighters set up base in the Forest Museum (“focused on man and his relationship to the forest”).

Hundreds of boxes packed with supplies for the displaced cluttered the log cabin. They brimmed with crackers and cereals and granola bars. Soft stacks of children-and-adult diapers reached up to the windows. Boxes held medicines and burn creams, aloe vera, Flamigel, hydrogel and Flogo Instant Calm Spray, under a sign promoting TWIG, the Transnational Woodland Industries Group.

An international group of emergency workers operated out of the cabin. Some of the 108 firefighters sent by Romania coordinated with Greek Army officials and local authorities to put out the flames. Some volunteers went out with chain saws to cut down trees while those returning leaned against a wall of bottled water and ruminated on what had gone wrong.

Ioannis Kanellopoulos, 62, blamed heavy snowfall during the winter for breaking so many branches and creating so much kindling on the forest floor. But the intense heat did not help.

“When the fire broke out it was 113 degrees in the shade,” he said.

He said the previous benchmark for destruction in the area was a 1977 blaze. This fire had far eclipsed it, he said, and guaranteed that it would not be surpassed for years.

“There’s nothing left to burn,” he said.

That there was nothing left to burn was the island’s common refrain. The punchline to the terrible joke nature had played on them.

But it wasn’t true. There was plenty more to burn.

At night the fires came back, appearing on the dark hillsides in the distance like Chinese lanterns. The fires burned on the sides of the roads like ghostly campsites.

Stylianos Totos, a forest ranger, stood rod straight as he looked through binoculars at a hillside near Ellinika.

“How do we get access to that one,” he called to his colleague in a truck carrying more than a ton of water. He worried that the wind would change direction from east to west and feed the fire with fresh pines. Just before 9 p.m. Tuesday, one of the small flames flared up, lighting all the barren land and twisted branches around it. “Andrea,” he shouted. “Call it in.”

But any help, and any change in global behavior, had come too late for Mr. Tertipis and his flock.

Mr. Tertipis, 60, who lost his mother and suffered permanent scarring on his left arm in 1977’s fire, rushed back from home to his stables before dawn on Sunday. The fire had consumed half his flock, but left a plush green pine tree and verdant field untouched only a few dozen yards away.

“That how it is, in five minutes, you live or die,” he said, adding, “the fire just changes all the time.”

For two days he could not answer the phone or do much of anything other than weep. Then he started cleaning up, wading through the remains in galoshes, dragging load after load away, using a sled he fashioned from a hook and a broken refrigerator door.

He had been raising animals all his life, and he said he had no choice but to keep going, no matter how inhospitable the weather around him had become.

“Things may have changed,” he said with a shrug. “What are you going to do? Just give up?”