Guarding the Last Likeness of a Loathed Dictator? It’s a Thankless Job. 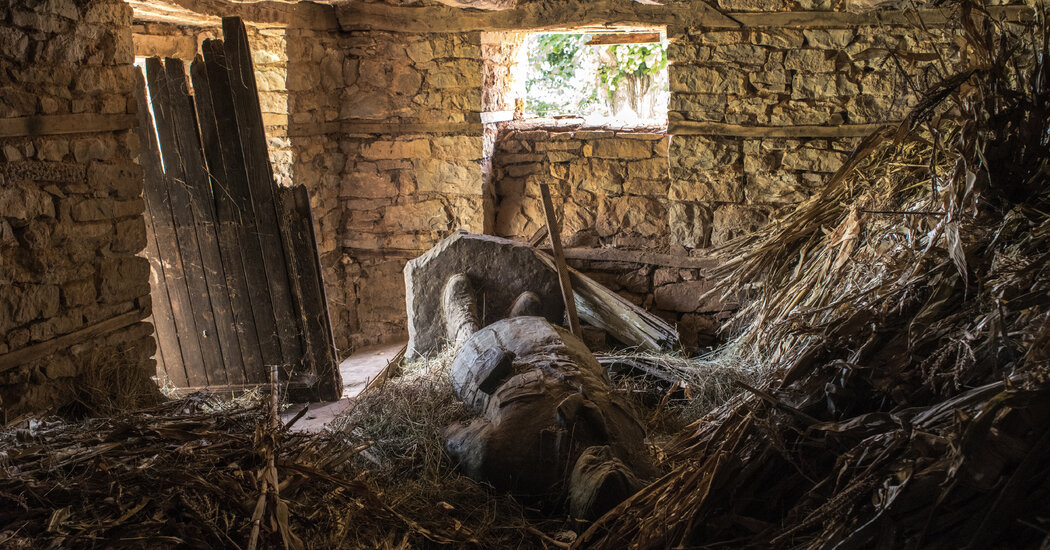 LABINOT MAL, Albania — Swaddled in straw on the dirt floor of a stable, the once omnipotent dictator lies helpless on his back. His face specked with bird droppings, he stares blankly at the sagging roof, a final indignity for a leader whose all-seeing eyes held millions in terrified thrall for four decades.

Enver Hoxha, who died in 1985, was Europe’s most enduring and feared communist tyrant, creating a cult of personality that left the impoverished Balkan nation of Albania awash with grandiose statues, marble busts and giant portraits in his honor.

Now, 30 years after the brutal system he left behind imploded, the cult has shrunk to a single tribute in bronze, toppled from its stone pedestal in a remote mountain village and dumped in a stable — but still watched over day and night by an elderly Albanian woman and her daughter.

“In his time, he was a good man, but nobody wants him anymore,” said Sabire Plaku, 80. “I have protected him with all my strength.”

Although now nearly deaf and partly blind, she still hobbles daily from her home in Labinot Mal in the mountains of central Albania to the nearby stable to make sure that the widely loathed former dictator is safe.

While not particularly enamored of Hoxha’s policies — a toxic mix of Stalinist paranoia and repression, with North Korean-style isolation and economic misery — Ms. Plaku still feels a duty to watch over what is almost certainly Albania’s last intact statue of a man who put her remote and now neglected mountain village on the map.

It was here in Labinot Mal that Hoxha (pronounced Hoe-zha) first took charge of Albania’s Communist Party during World War II, and presided over the founding on July 10, 1943, of the National Liberation Army. That guerrilla force, aided by Britain and communist partisans from neighboring Yugoslavia, helped defeat invading Italian fascists and then the Nazis.

After the war ended, Hoxha, a French-educated botanist, took control of Albania and began executing his wartime comrades. Labinot Mal became a place of pilgrimage, which ensured that it avoided at least the worst of the deprivation visited on the country by his 41-year rule. The village got a clinic, electricity and a museum. It also got a 10-foot-tall bronze statue of the “Supreme Comrade.”

The museum, housed in a grand villa built before the war as a summer retreat and then confiscated by Hoxha’s communists, closed decades ago, along with the clinic and the collective farm. Part of its roof has collapsed, and the current government has shown no interest in saving it from ruin.

Agim Qoku, a local historian, said he rejoiced at Albania’s retreat from policies that, in Hoxha’s time, made the country Europe’s most oppressed and backward. But he still thinks the museum should be revived, as a tribute not to the dictator but to Albania’s wartime struggle against foreign fascists.

The stable where Hoxha lies on his back is at the side of the defunct museum. It is the only part of the villa that, thanks to Ms. Plaku and her daughter, has not been plundered.

For all of the agonies of Hoxha’s rule — when Albania broke with not only the West but also Yugoslavia, the Soviet Union and eventually even China, all of which the Balkan dictator came to view as too liberal — some villagers still remember his reign with nostalgia. He did improve the country’s health care and schools.

Still one of Europe’s poorest countries, Albania has hemorrhaged people since student protesters tore down a 30-foot statue of Hoxha in the center of Tirana, the capital, in February 1991. It was an example quickly followed in towns across the country.

In the following decade, Hoxha’s acolytes, including his widow, were put on trial and a capitalist free-for-all replaced dogmatic communism. And nearly a quarter of the population emigrated, not because people pined for the old order but mostly because they could for the first time leave to find work. Before, trying to leave Albania was a serious crime punishable by death.

Ruzhdi Balla, the 42-year-old owner of a tiny cafe — Labinot Mal’s only business — recalled watching in 1991, when the authorities in the nearest town sent a crane, escorted by police cars, to lift a statue of Hoxha from its pedestal in front of the museum. Workers hoisted the statue into the air and then recoiled in horror as a big black snake appeared under its feet.

Since then, four of Mr. Balla’s eight siblings have moved to Greece to find work, while two others have left the shrinking village, which now has at most a few hundred people, for other parts of Albania.

Residents disagree on whether Hoxha got what he deserved when he was pulled down, but there is broad agreement that the removal of his statue was the last time government officials paid much attention to their village.

“Let’s put him back,” said the cafe owner’s 72-year-old older brother, Islam Balla. “TV crews will come and film us. Maybe then the world will remember that we still exist.”

Whatever his many faults, according to the older brother, the dictator at least cared about Labinot Mal, trekking there in 1968 for the unveiling of his bronze likeness. “It was a really spectacular day,” the elder Mr. Balla said, recalling the festivities. “We have seen nothing like it since.”

The only visitors today, he added, are a few “fanatics” who arrive once a year to lay a wreath at the base of the toppled statue’s pedestal.

To prepare for the dictator’s 1968 visit, the government resurfaced the only road connecting the village to the outside world. A half-century later, the road has crumbled into a treacherous pitted track.

Mr. Qoku, a schoolteacher, said the area had always been a world apart, submitting to the Ottoman Empire long after the rest of Albania had succumbed, and resisting the Nazis with such zeal that the area lost more fighters per capita than anywhere else in the country.

But these ornery habits, he said, have today put Labinot Mal at odds with the spirit of the times, which are dominated by rejection of Hoxha and everything he stood for.

In Tirana, the only Hoxha statuary still on public display is a battered marble bust, its nose smashed and face disfigured. It stands at the back of the national art gallery, near an underground museum detailing the horrors of Hoxha’s secret police, the Sigurimi.

Construction work started this year in Tirana to transform a Pharaonic tribute to Hoxha — a huge pyramid built in 1988 to house a memorial museum — into a complex of cafes, classrooms and studios. Defaced by graffiti and falling apart, the pyramid had previously been used as a horror movie set, a temporary NATO base during the Balkan wars of the 1990s, and a nightclub.

Ms. Plaku, Hoxha’s elderly guardian in Labinot Mal, said she had no desire to see another leader like him. But she still feels a sense of responsibility to the past.

Worried that thieves want to steal the bronze statue and melt it for scrap, she lamented that “only bad people want Hoxha today.” With her health failing, she said her daughter, Fatush Balla, 66, would soon have to protect him on her own.

“I have done my duty,” Ms. Plaku told her daughter as they sat together on the edge of their garden, next to a plum tree. “Now it is your turn to guard him.”

The daughter, who returned from Greece seven years ago to take care of her mother, has already taken over much of the work.

She visits the stable regularly to make sure nobody has disturbed his straw covering and chases away any prying visitors she suspects of ill intent, threatening to shoot anyone who enters the stable without her approval.

“We’ve protected him for 30 years, but nobody has given us anything,” the daughter said. “I don’t really care about politics and just want a decent living for myself and my mother.”