He Guarded Haiti’s Slain President. And He’s the Target of a Drug Inquiry. 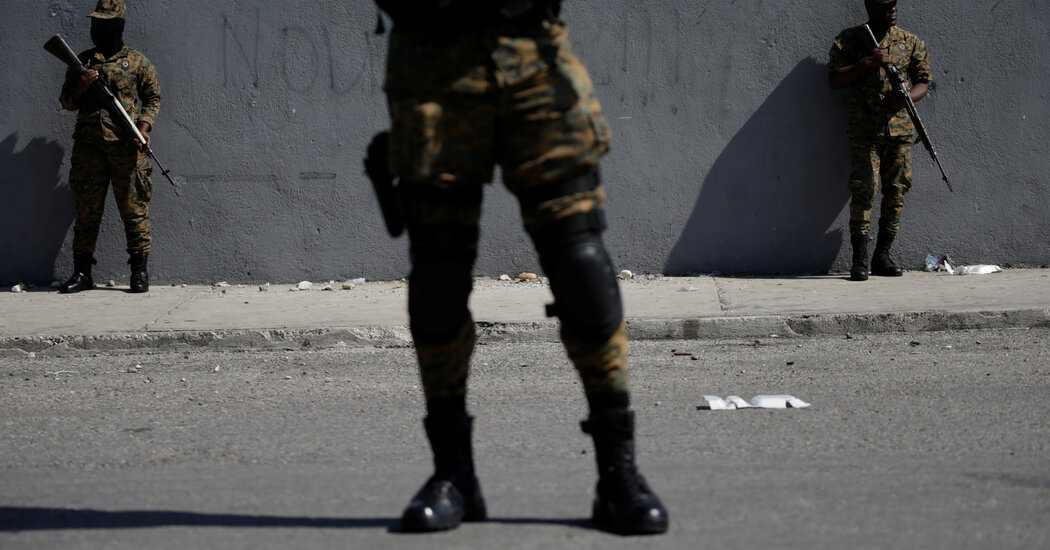 PORT-AU-PRINCE, Haiti — The commander in charge of guarding the Haitian president’s home quickly became a suspect in the assassination of President Jovenel Moïse last month when his security team inexplicably melted away, enabling hit men to enter the residence with little resistance and kill the president in his own bedroom.

But current and former officials say that the commander, Dimitri Hérard, was already a suspect in a separate case that the United States Drug Enforcement Administration has pursued for years: the disappearance of hundreds, if not thousands, of pounds of cocaine and heroin that were whisked away by corrupt officials only hours before law enforcement agents showed up to seize them.

Now, some international officials assisting with the investigation into the president’s assassination say they are examining whether those criminal networks help explain the killing. Haitian officials, including the country’s prime minister, have acknowledged that the official explanation presented in the days after the assassination — that Mr. Moïse was gunned down in an elaborate plot to seize political office — does not entirely add up, and that the true motive behind the murder has not been uncovered.

Haiti is a major transit point for drugs heading to the United States, and American and United Nations officials say the trade flourishes through an array of politicians, businesspeople and members of law enforcement who abuse their power. Now, current and former officials say that Mr. Hérard has long been a focal point of the investigation into one of the biggest drug trafficking cases the D.E.A. has ever pursued in Haiti.

“The corruption goes up to the top levels,” said Keith McNichols, a former D.E.A. agent who was stationed in Haiti and led the agency’s investigation into the missing drug shipment. “Justice is elusive.”

The sprawling drug case not only involves Mr. Hérard, but also judges and the brother-in-law of a former Haitian president. Officials say the staggering quantity of drugs spirited away by officials illustrates the extent to which Haiti has become a narco-state — with Haitian politicians, members of the judiciary and even American officials in the D.E.A. enabling corruption for years.

When a Panamanian-flagged cargo ship called the MV Manzanares docked at a privately owned seaport in Haiti’s capital in April 2015, officials say that longshoremen began offloading what they thought were bags full of sugar — until one ripped open, revealing the valuable, illicit goods inside.

Fights broke out among the longshoremen as they stole what they could of the enormous stash of cocaine and heroin, officials say. Security guards fired into the air to stop the looting, with the ruckus alerting Mr. McNichols and the Haitian anti-narcotics police to the chaos unfolding at the port.

But before they could get there, two Jeeps sped up to the dock. Men in presidential guard and other police uniforms emerged, and instead of making arrests, they furiously grabbed bags of cocaine and heroin, throwing loads into their vehicles before speeding away, witnesses and officials say.

Shouting commands to some of the guards was Mr. Hérard, a member of the presidential security force at the time, according to a witness interviewed by The New York Times and to Mr. McNichols, who arrived about two hours later and started his investigation at the scene.

Witnesses not only told him about Mr. Hérard’s actions at the port, but also that most of the illicit cargo — as much as 800 kilograms of cocaine and 300 kilograms of heroin — had already been hauled away. A former United Nations official confirmed that Mr. Hérard had been spotted at the port and accused of deploying members of the presidential guard to ferry the drugs off the ship.

In all, about 120 kilograms of cocaine and heroin were eventually recovered during a 28-day search by Haiti’s anti-narcotics unit, the D.E.A. and the U.S. Coast Guard. Even the recovered amount makes it one of the biggest drug busts on record in Haiti.

The D.E.A. would not comment on its investigation into the fiasco at the port. None of the main suspects have been arrested, and the case ultimately led to a whistle-blower complaint that the agency was not doing enough to fight drug trafficking in Haiti.

Multiple witnesses have accused Mr. Hérard of working with Charles Saint-Rémy, the brother-in-law of former President Michel Martelly; Bernard Mevs, whose family owns the terminal where the ship docked; and members of the Acra family, who imported the sugar the ship was carrying, to bring drugs into Haiti, according to a current senior American official who worked on the case as well.

While the drug raid was first revealed by The Miami Herald, the fact that Mr. Hérard and the former president’s brother-in-law were suspects in the investigation has not previously been reported.

Mr. Hérard is currently in Haitian custody, detained in connection with the assassination. The president’s widow has angrily demanded to know what happened to the dozens of guards Mr. Hérard commanded, and why none of them were killed when assailants stormed her home on July 7, wounding her and shooting her husband dead on the floor beside her.

Mr. Hérard could not be reached for comment in detention, and his lawyer declined to pass on questions to his client. A spokeswoman for the Haitian National Police denied that the force was involved in narcotics trafficking.

Mr. Saint-Rémy texted “no, no, no” when asked whether he had ever taken part in drug trafficking. A member of the Acra family declined to comment. And Mr. Mevs denied any wrongdoing or ever meeting Mr. Hérard, adding that he knew Mr. Saint-Rémy only as an acquaintance.

Mr. Mevs’s lawyer, Joel Hirschhorn, said that the D.E.A. was relying on impoverished Haitians willing to lie to support a biased investigation.

“It doesn’t take much for someone who is desperate to take the offer of a better life,” he added, “to take the D.E.A. ball and run with it, even if it may be false.”

But the web of corruption in Haiti ran even deeper, Mr. McNichols asserted — all the way to the D.E.A. itself.

When Mr. McNichols and a second former D.E.A. agent, George Greco, first arrived in Haiti in 2014, they said they noticed as much as $1.2 million in irregular expenses that appeared to enable a senior D.E.A. official to receive fraudulent reimbursements.

Witnesses had also reported seeing the senior D.E.A. official meeting several times with Mr. Saint-Rémy in private, raising concerns that the official was tipping off Mr. Saint-Rémy about D.E.A. operations, according to Mr. McNichols and an affidavit by an F.B.I. agent. The D.E.A. prohibits agents from meeting alone with suspected drug traffickers, to prevent bribery and collusion.

A D.E.A. spokeswoman declined to comment on the allegations.

Mr. McNichols said he reported the suspicious payments and meetings, only to be reprimanded by his superiors within the D.E.A. for pressing the matter.

He and Mr. Greco recounted serious flaws in antidrug efforts in Haiti. Whenever he and Mr. Nichols tried to enter the seaport, they said guards stalled them at the entrance for about half an hour, despite their diplomatic license plates. But when they pushed the D.E.A. to do more to fix the problems, they said they were rebuffed.

“The port is an open sewer,” Mr. Greco said.

Van Williams, another United Nations anti-narcotics supervisor based in Haiti at the time, agreed.

“There was very little importance placed on the docks, which I found very strange,” Mr. Williams said. “Corruption in Haiti from the top on down is so rampant.”

The problems at Haiti’s seaports persist. With only two operational sea vessels for 1,100 miles of coast, “maritime law enforcement is a daunting task,” concluded an American government report earlier this year. Only five people have been convicted of drug trafficking in Haiti, and the government did not classify corruption as a crime until 2014, the report added.

Mr. McNichols said his alarm grew as his investigation deepened. Traffickers told him that Haiti had become a preferred transit route for smugglers because the police helped move thousands of pounds of drugs for them.

What Mr. Hérard may have done with the illicit cargo taken from the port that day remains unclear. But his job protecting Mr. Martelly, the president at the time, and allegations that he worked with Mr. Saint-Rémy — Mr. Martelly’s brother-in-law — were central points in the investigation.

Mr. Martelly was nearly a year away from finishing his presidential term and preparing his handpicked successor, a little-known banana exporter named Jovenel Moïse, to take his place.

But Mr. Martelly denied a request from the Haitian judicial police to question Mr. Hérard over his role in the Manzanares case, according to a United Nations official stationed in Haiti at the time. Mr. Martelly declined to comment.

Mr. Hérard emerged again as a suspect in the assassination of Mr. Moïse. The president’s widow said her husband called Mr. Hérard as the killers stormed the house, pleading for help. Phone records and Mr. Hérard’s initial testimony also showed that Mr. Moïse had called him at 1:39 a.m. on the night of the killing. But Mr. Hérard and his unit never engaged the hit squad at the residence, instead mounting a roadblock some distance away, according to his initial police testimony.

Haitian security officers eventually cornered some of the suspected assailants in a house near the presidential residence. Officers said they saw Mr. Hérard speaking by telephone to the mercenaries and attempting to negotiate their surrender, but it was unclear how Mr. Hérard had obtained their numbers.

Mr. Hérard wasn’t the only person in the president’s orbit suspected or convicted of drug trafficking. In March, Lissner Mathieu, a convicted trafficker who provided what the Moïse administration called “professional services” for the national palace, was arrested in Haiti by the D.E.A. and flown to the United States.

Mr. Mathieu fled to Haiti in 2006 after admitting in court that he had smuggled 500 kilograms of cocaine into the United States. When Mr. Mathieu was detained, he was found with an access card to the national palace. A photo of him on the campaign trail with Mr. Moïse later emerged. The president’s office later said Mr. Mathieu was not an employee and had an access badge like many other service providers.

As for the drugs coming through the seaport, Mr. McNichols and Mr. Greco said that the obstacles, stonewalling and hostility they endured within the D.E.A. eventually led them to leave the agency.

Last month, the U.S. Office of the Special Counsel, the American government arm responsible for protecting federal workers from political interference, reprimanded the D.E.A. for its handling of the Manzanares case and for not doing more to clean up Haiti’s ports.

“I went through hell, speaking the truth and trying to do the right thing,” said Mr. McNichols.

Anatoly Kurmanaev in Port-au-Prince and Julian Barnes in Washington, D.C., contributed to this report.