Hezbollah Fires Rockets at Israel as Risk of Escalation Looms 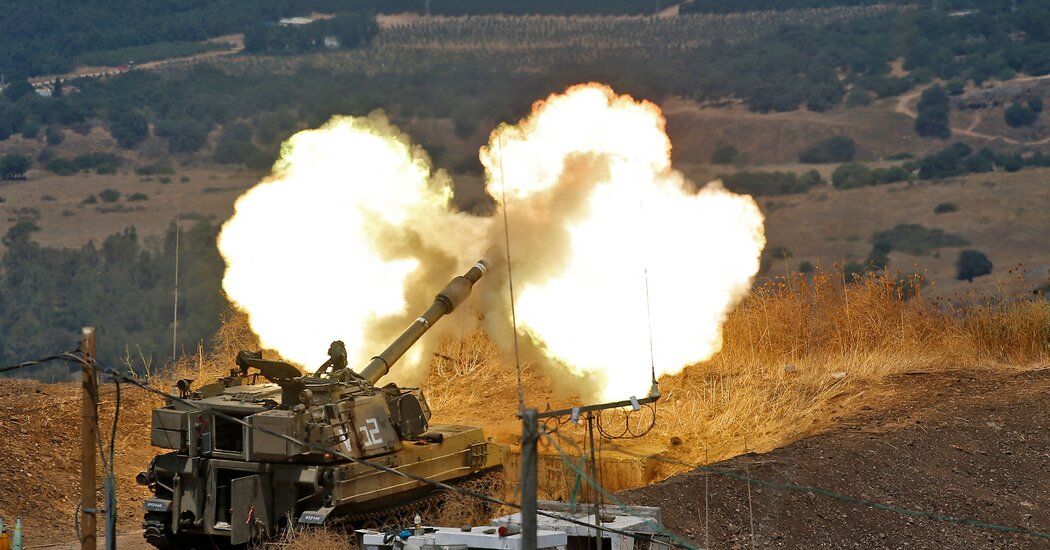 JERUSALEM — Hezbollah, the Iran-backed Shiite Lebanese organization, claimed responsibility for firing a volley of rockets over Israel’s northern frontier on Friday, the latest in a spate of tit-for-tat cross-border attacks that risk ratcheting up regional tensions.

The salvo was significantly larger than previous rocket launches from Lebanon in recent weeks, and the first to be directly claimed by Hezbollah in many years. On Friday afternoon, Israel’s political and security leaders were holding consultations about how to respond.

Amid heightened tensions between Israel and Iran, both Hezbollah and the Israeli military indicated that neither desired any dramatic or imminent escalation and seemed to be trying to defuse the situation. But the Israeli military also said it would not allow attacks to continue unhindered along the border.

“We do not wish to escalate to a full war, yet we are very prepared for that,” said Lt. Col. Amnon Shefler, an Israeli military spokesman, less than three hours after the attack.

The Israeli military said that 19 rockets had been fired from Lebanon, three of which fell short in Lebanese territory. Ten more were intercepted by Israel’s air defense system while the rest landed in open areas.

There were no casualties or damage, and the military said it struck back at the rocket launch sites in Lebanon, in what appeared to be an initial, contained response.

The Israeli military announced that civilian life along the border could continue as normal and tourist attractions remained open. The move signaled an expectation that no further major action was imminent at a time when many Israelis are vacationing in the north of the country.

Hezbollah also signaled that its rocket salvo was not intended to break the current balance, noting in a statement that two of its brigades had fired “tens” of rockets at “open land” near Israeli sites in the disputed Shebaa Farms area.

Shebaa Farms — known in Israel as Mount Dov — is a strip claimed by Israel, Lebanon and sometimes Syria near the intersection of all three nations, adjacent to the Golan Heights.

The group said its rockets were a response to Israeli airstrikes on Thursday that had also hit “open land” in southern Lebanon. The airstrikes were also the first to be carried out by Israel in Lebanese territory in many years.

Those strikes came after militants fired rockets into Israel on Wednesday for the second time in two weeks. The last few rocket attacks from Lebanon have been attributed to rogue Palestinian groups.

Colonel Shefler, the Israeli military spokesman, said that Hezbollah’s claim of responsibility on Friday was likely aimed at showing that the organization still has control over the border area in southern Lebanon and that the Israeli airstrikes would not go unanswered.

Hezbollah, which fought a devastating, monthlong war with Israel in 2006, also has an open account with Israel to avenge the killing of one of its operatives a year ago in a strike in Syria that was attributed to Israel.

As far as Hezbollah is concerned, killing the operative was a violation of the unwritten rules of its engagement with Israel, according to which Israel kills Iranians or Syrians, but only harms Hezbollah equipment, not its people.

Friday’s events were the latest in a long shadow war being played out by Israel, Iran and its proxies by land, air and sea, which has increasingly flared in the open.

Zvika Haimovich, a retired Israeli general and former commander of the Israel Air Defense Forces, said that both Hezbollah and Israel were trying to act within the established formula of recent years and that it was in Israel’s interest to keep its border with Lebanon quiet and “keep Lebanon out of the game.”

But given what he described as the advancement of Hezbollah’s Iran-backed program to develop precise missiles in Lebanon, Mr. Haimovich added, “We are close to a point where Israel will have to act against Hezbollah in Lebanon,” and that the events of the last few days brought that point even closer.

Tensions between Israel and Iran’s allies have been further heightened by expectations that Israel may soon retaliate for an attack last week on an Israeli-linked merchant ship in the Indian Ocean. Israel blamed that attack on Iran and has been calling for more of an international response as two foreign nationals, one Romanian officer and one British security guard, were killed on board.

Significant preparations have been underway for an Israeli military response against Iran for the attack on the ship, according to three Israeli officials with knowledge of the decision-making process on national security issues, and who asked not to be named when discussing sensitive operational topics.

The preparations intensified after rockets were fired from Lebanon on Wednesday, which Israeli military intelligence believes could not have happened without the consent, or at least the turning of a blind eye by Hezbollah, which would ordinarily coordinate such an attack with Iran.

According to the officials, Israel considers these attacks as an attempt by Iran to establish new unwritten rules for engagement with Israel.