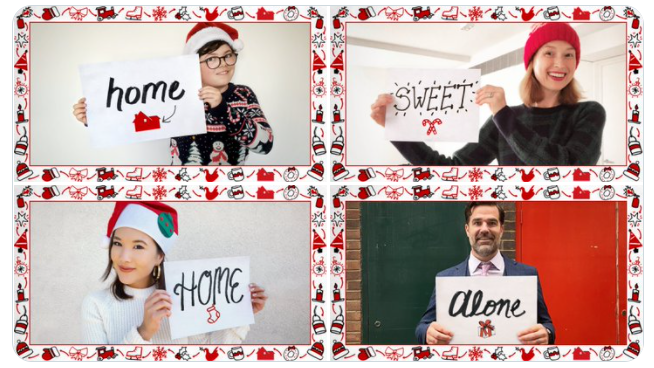 Walt Disney just announced a title (Home Sweet Home Alone), a Disney+ air date (November 12) and a cast (Archie Yates, Ellie Kemper, Rob Delaney, Aisling Bea, Kenan Thompson, Tim Simons, Pete Holmes, Devin Ratray, Ally Maki, and Chris Parnell) for a soft streaming-specific reboot of the Home Alone series. The film features Yates (from Jojo Rabbit) as a young man left behind when his family goes to Japan for the holidays. Yes, there are crooks up to no good, in this case a married couple (presumably Kemper and Delaney, although I could be mistaken) breaking into the Mercer family home to snatch a priceless heirloom.

I will presume that crowd-pleasing, Looney Tunes-style conflict ensues, although we’ll see if they going as Saw-like as we saw in Home Alone 2: Lost in New York. Yes, it was the third act of Home Alone, which saw Kevin McCallister (Macaulay Culkin) booby-trapping his home to fend off the Wet Bandits (Joe Pesci and Daniel Stern) that turned the film into one of the biggest-grossing movies of all time. The live-action family comedy grossed $285 million domestic (and $486 million worldwide) from a $17 million mid-November 1990 debut.

It was, at the time, the third-biggest domestic grosser even behind E.T. ($359 million before the 2002 rerelease) and Star Wars ($322 million prior to the 1997 reissue). At the time, nine-year-old me was outraged that this kiddie comedy had outgrossed the likes of Raiders of the Lost Ark, Jaws and especially Batman. Decades later, it is all the more impressive that this $18 million Chris Columbus-directed/John Hughes-penned holiday flick went toe to toe with the mega-budget likes of Ghostbusters and Return of the Jedi.

1990 was something of a one-of-a-kind year for one-off originals or new-to-you adaptations (Home Alone, Ghost, Dances With Wolves, Pretty Woman, Total Recall, etc.) putting up bonkers-bananas box office grosses. In retrospect, it’s surprising that Home Alone is the only one of the above-noted smash hits which got a theatrical sequel. Home Alone: Lost in New York, featuring a game supporting turn from Tim Curry and a now-unfortunate cameo from Donald Trump, would open on this same weekend in 1992.

I remember being relieved that it didn’t top the $43 million and $47 million debut weekends of Batman and Batman Returns. Yes, I was always that annoying, even if I eventually learned as a teen not to take box office results personally. Home Alone 2 would earn $175 million domestic and $358 million worldwide from a $31 million debut. 12-year-old me saw it on Saturday after seeing Malcom X with my folks on opening night (no, I wasn’t allowed to skip school to see it). Home Alone 3 was essentially a reboot before we talked of such things.

It starred Alex D. Linz and co-starring Scarlett Johansson in one of her very first roles. It earned $79 million worldwide on a $32 million budget in 1997. Taking Back the House in 2002 Holiday Heist in 2012  were ABC Family original flicks. Home Alone and Lost in New York remain perennial holiday favorites, but they were not Disney flicks. Home Alone opened head-to-head with The Rescuers Down Under and its miserable $3.4 million debut weekend. While Disney was making some inroads with live-action hits (Pretty Woman would nab $178 million domestic and $463 million worldwide in early 1990 via Touchstone Pictures), they were still comparatively in flux.

I’m not among those who champion the notion of Disney as a monopoly. Nobody is stopping moviegoers from watching non-Disney flicks in theatres or on streaming platforms. Moreover, it’s not like if Disney went away that Hollywood would start making big-budget A24/NEON-style releases. But there is something, even presuming no malice or ill-intent, diabolical in how the Fox/Disney deal will allow a deluge of iconic family-friendly brands and franchises to become associated by the general populace as existing under the umbrella of what was once their biggest competitor.

Most of the chatter around Disney’s Fox purchase was about the X-Men and Fantastic Four characters being available to Kevin Feige’s Marvel Cinematic Universe. However, less high-profile was the sheer number of family-friendly IPs (Night at the Museum, Home Alone, Diary of a Wimpy Kid, Ice Age, all three Chronicles of Narnia movies, Alvin and the Chipmunks, etc.) which are now de-facto Disney brands. Now even Anastasia (which was explicitly positioned as competition for the mid-90’s Disney animation empire) and The Greatest Showman (which pulled Home Alone-style legs at Christmas 2017) are retroactively Disney flicks.

Lucasfilm and MGM’s Willow is getting a TV reboot, arguably in the hopes that younger/less-informed audiences will associate Willow nostalgia with Disney. Whether by design or mere coincidence, some of the biggest family-friendly hits of my lifetime, films which were very much not Disney movies, are now going to be Disney flicks, not just in terms of their new owners but in terms of brand association. As such, the biggest news about this new Home Alone movie is that it will feature the Walt Disney banner. René Belloq might have something to say about that.