How Heinicke Can Bring Stability Under Center In Washington 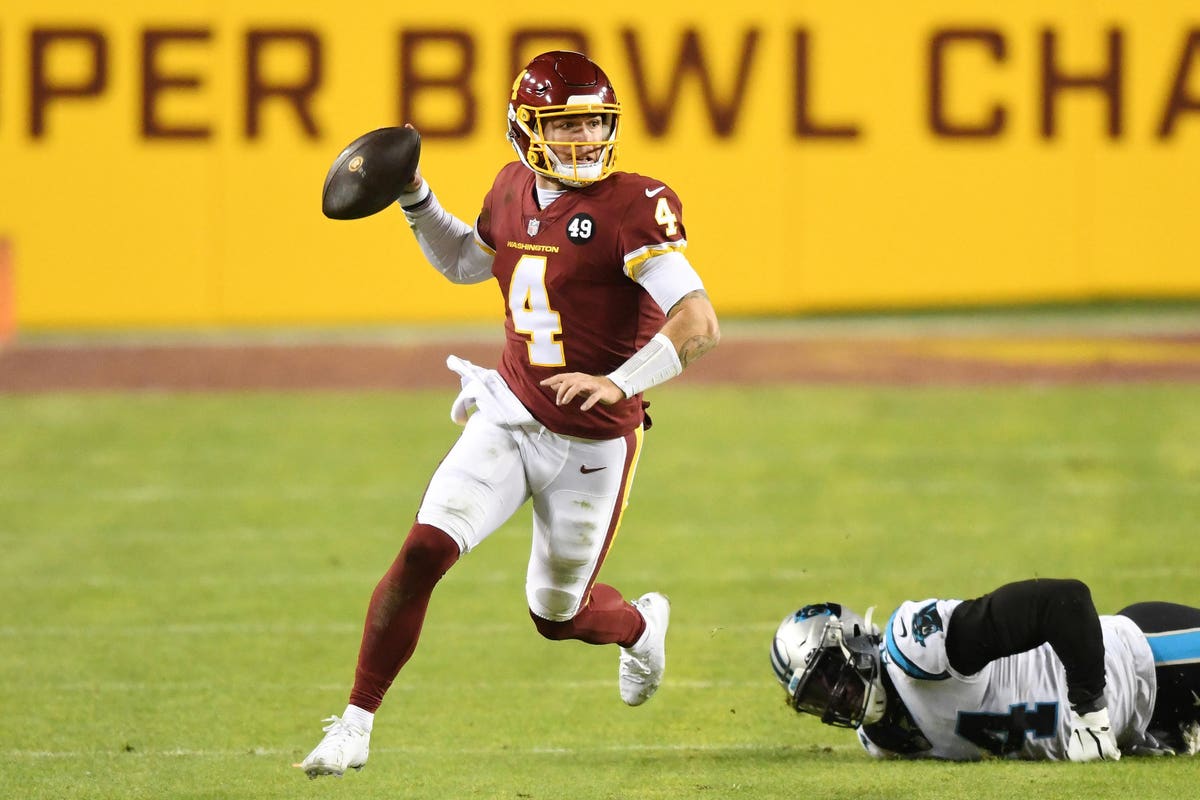 It was always going to be magic or tragic.

When quarterback Ryan Fitzpatrick exited the home opener against the Los Angeles Chargers early with a hip injury, the Washington Football Team got their answer: tragic – at least for now.

An MRI has since revealed that Fitzpatrick has a right hip subluxation. ESPN reported that the journeyman QB is expected to miss six to eight weeks, paving the way for Taylor Heinicke to get the start under center. In the Week 1 loss, Heinicke completed 11 of 15 passes for 122 yards and a touchdown following Fitzpatrick’s departure in the second quarter.

Washington is no stranger to the quarterback carousel. Last season, the team fielded four different QB’s under center in the regular season and playoffs, beginning with Dwayne Haskins Jr., Kyle Allen, Alex Smith and then Heinicke. It was only when Smith brought some consistency under center that the team began winning. In his six starts, the Football Team posted a 5-1 record after losing five of six to begin the season. Before 2020, Washington used four different starting QB’s in 2018 and three more the following season.

“It’s the nature of the game,” said coach Ron Rivera. “Unfortunately it’s happened more than it needs to have in the last season and a game. I hope we get a streak where we keep guys on the field for a long time and benefit from their abilities.”

It was not Washington’s plan for Heinicke, who had appeared in just one regular-season start before Sunday’s game, to start the next six-eight weeks. But the 28-year-old QB is not as different from the 38-year-old Fitzpatrick as he may first appear.

The journeys of both quarterbacks have been defined by change. Fitzpatrick has now played on nine teams in 17 seasons and Heinicke has been a part of four teams in four seasons, including the two years he spent on the Minnesota Viking’s practice squad, as well as a stint in the XFL. Fitzpatrick was drafted in the seventh round of the 2005 NFL Draft and was the last of 14 QB’s selected. Heinicke played college ball at Old Dominion, a school that only made the transition to FBS while he was there, and was not selected in the 2015 NFL Draft.

Both signal-callers are underdogs and journeymen respective to their NFL careers. Fitzpatrick was signed to the Football Team to bring consistency under center, and his injury was unexpected. But the veteran QB was always a placeholder and his departure was never unforeseeable. Heinicke’s consistency is in his flexibility and he will bring that elusive trait to the huddle on game days.

In three games with the Football Team dating back to last season, including one start in a playoff loss to Tampa Bay, Heinicke has completed 62.8% of his passes for 565 yards, three touchdowns and one interception. He has a 50.1 Total QBR in those seven quarters. His last regular-season start was on Dec. 23, 2018.

But Heinicke became a fan favorite during the playoff game against the Bucs last season when he dove over the pylon in the end zone to complete an eight-yard touchdown run that cut an eight-point deficit to just two. Star defensive end Chase Young rushed over to Heinicke after the score and pointed to the name on the back of the QB’s jersey, imploring fans to remember it.

It was on the heels of this performance that Washington signed Heinicke to a two-year contract in the offseason that included base salaries of $1 million in 2021 and $1.5 million in 2022. But the contract also includes incentives that depend on how many games he starts – incentives that may now kick in sooner rather than later.

“He could start on any other team in the league,” Young told reporters on Tuesday, via Sam Fortier of The Washington Post.

Wide receiver Terry McLaurin also expressed his support of Heinicke this past week, saying that he is “always ready for the moment.”

For Heinicke himself, the impending start is something he has thought about for a long time.

“Something I’ve been dreaming about my whole life, being a starting quarterback in the NFL, and here we are,” Heinicke said in his media availability on Tuesday. “I really try and take it one day at a time, one meeting at a time, one play at a time. I feel like if I just live in the moment, everything else will take care of itself.”

Heinicke will be tested as the next eight weeks include matchups against four teams that won their divisions last season in the Buffalo Bills, New Orleans Saints, Kansas City Chiefs and Green Bay Packers. His first start is also crucial as it comes against the division-rival New York Giants.

“I believe first and foremost, and I got this from playing for Mike Ditka, that if you want to win your division, you gotta control your division,” Rivera said after Sunday’s loss.

That control now rests on the shoulders of an unlikely signal-caller who was taking a virtual math course at Old Dominion just nine months ago when Rivera called him about being the team’s ‘quarantine quarterback.’