How India’s Covid-Hit Hospitals Ran Out of Oxygen 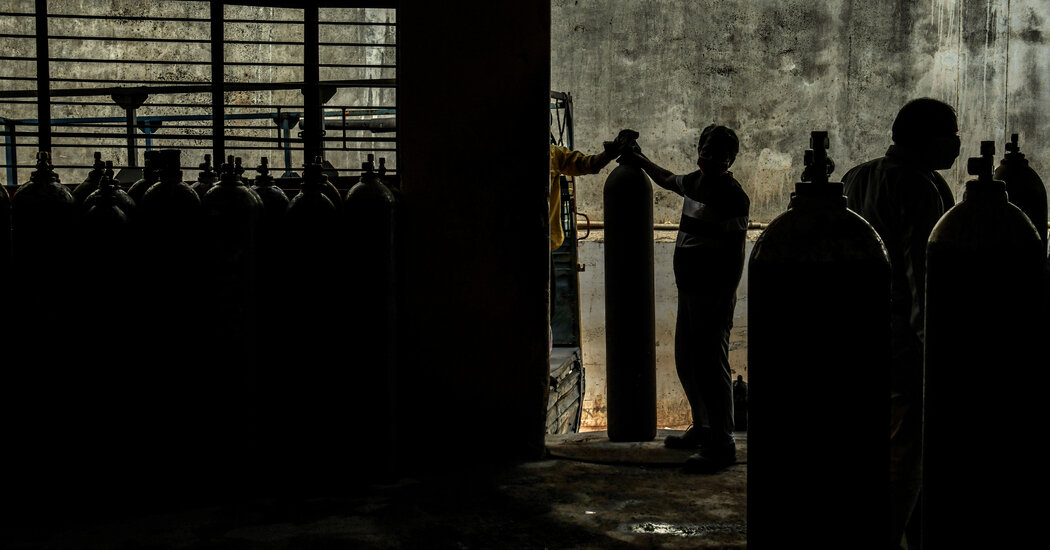 NEW DELHI — At 9:45 p.m., alarms blared across the intensive care unit of Jaipur Golden Hospital. Over two dozen patients on ventilators couldn’t breathe. Some flailed their arms and legs. Others cried for help, choking sounds coming from their throats as if they were being strangled.

Mechanics sprinted to the maintenance room to see what was wrong. Nurses grabbed small plastic pumps to fill the lungs of critically ill patients by hand.

It wasn’t enough. Jaipur Golden, a respected hospital in Delhi, had run out of medical oxygen. Over the next seven hours, 21 coronavirus patients died.

“Nobody can forget that night,” said Shaista Nigar, the hospital’s nursing superintendent. “It was a total breakdown.”

India is a major producer of compressed oxygen. But the Indian government moved too late to distribute supplies.

Delhi city officials didn’t build systems to produce or store oxygen and struggled to allocate dwindling supplies. When tight supplies and government missteps led oxygen to run out at Jaipur Golden, some families said the hospital offered no warning.

Without a comprehensive coronavirus plan, Mr. Modi’s government has left much of the burden to states, cities, hospitals and even individuals. The oxygen crisis tragically revealed the limits of a do-it-yourself approach.

That approach will be tested again. Though infections have dropped, a vaccine shortage puts India at risk of a third wave. Without adequate preparations, the second wave’s tragedies could return.

“With an effective surge plan,” said Robert Matiru, a director at Unitaid, a health initiative affiliated with the World Health Organization, “this could have been averted.”

Anuradha Bansal had a 102-degree fever when she checked into Jaipur Golden on April 13. A veteran schoolteacher, Ms. Bansal had tested positive for Covid-19, along with her husband, Atul, and their two daughters.

Jaipur Golden had a good reputation. A four-story private hospital, it offered specialties like orthopedics and pediatric gastroenterology. Its motto was “We Care … With Care.”

But Ms. Bansal was shocked by the crowds filling Jaipur Golden and other hospitals in Delhi. Sick people packed the reception area, some leaning against the walls. In her Covid-19 ward, she said, extra beds had been squeezed in.

Her husband, Atul, a lawyer, was lying on his back in the I.C.U. down the hall, a plastic oxygen mask strapped to his face. He had been healthy for his 54 years, a strong swimmer who could hold his breath for minutes and ate a wholesome diet of beans, whole grain flour and yogurt.

Across northern India, medical oxygen was running short as Covid-19 caseloads soared. In one month, Delhi’s daily count had jumped to 13,468 from 419. Delhi’s 650 hospitals and nursing homes were so deluged that they were shutting their gates, leaving people to die at the curb or in their cars.

Though the tragic experiences of other places, like Egypt, showed what happens when oxygen runs out, India was still unprepared. It produces about 7,100 metric tons of liquid oxygen a day, mostly for industrial use. At the pandemic’s peak, India’s demand soared to 9,500 metric tons a day.

Worse, the oxygen was in the wrong place. Most was produced near steel plants in eastern India, hundreds of miles from hot spots like Delhi.

In November, a parliamentary committee urged leaders “to ensure that the oxygen inventory is in place.” A plan was unveiled to eventually build more than 160 plants that pull oxygen from the atmosphere for hospital use. Hospitals expanded their oxygen storage capacity by one-third, according to government figures.

As the second wave surged, it was clear that the efforts weren’t enough. Only about one-fifth of the oxygen plants had been built. The extra storage represented only a quarter of India’s emergency needs. Oxygen supplies were still concentrated in specific regions.

On April 15, the Modi government essentially nationalized India’s medical oxygen and dictated each state’s allotment. Air Force planes would airlift empty cryogenic tanker trucks to places like the Tata Steel plant in Odisha State, where they would be filled with liquid oxygen, put on special train cars and moved more than 1,000 miles to Delhi.

Still, much of the burden remained with the states. In an April 17 meeting, Dr. Harsh Vardhan, India’s health minister, urged 11 state health chiefs to “plan in advance” and increase medical infrastructure, including oxygenated beds, “to deal with any further surge in cases.”

Delhi officials warned that the central government wasn’t giving them enough. The Modi government allocated about 350 metric tons of oxygen a day to the capital. Delhi needed twice that and, in court proceedings, accused the government of basing the city’s allocation on prepandemic needs. The central government cited desperate needs in other places.

In the meantime, the crowds of sick people at the gates of Jaipur Golden and other hospitals were growing.

By April 20, Jaipur Golden was overstretched and undersupplied.

“My father was seething from inside,” said Rohit Gupta, a sales manager in Delhi whose father, Satish Kumar Gupta, had been admitted to the I.C.U. in early April. The younger Mr. Gupta said his father soiled the bed because nobody helped him go to the bathroom.

Mr. Gupta said his father cried out, “Take me away from here.” The hospital declined to comment.

As the national government doled out limited amounts of oxygen, officials in Delhi grew increasingly worried. Its hospitals had built only one small oxygen-generating plant because there had previously been little need, said Manish Sisodia, Delhi’s deputy chief minister. And Delhi could store only about one day’s worth of its pandemic needs at its hospitals and in a city-owned tank.

“The neighborhood supply has long been adequate,” Mr. Sisodia said. “The problem only came when the plants that were regularly supplying Delhi were asked to apportion some to other states.”

He appealed to the central government on Twitter, saying major hospitals had only enough for a few hours.

As supplies dwindled, Delhi’s oxygen was increasingly being confiscated by other states.

On April 21, officials in Haryana State stopped a Delhi-bound tanker. Officials in Uttar Pradesh did the same. In Rajasthan, officials briefly seized several.

The reason was simple: People in other states were also dying from a lack of oxygen. “If we have any left over,” Anil Vij, Haryana’s health minister, said to local media, “then we will give it.”

Delhi sent police officers to the Haryana border, and the tanker was allowed to proceed.

That day, Delhi received only 178 metric tons of liquid oxygen — half of what the central government had allocated and about a quarter of what the city needed.

A Delhi court ordered the central government to stop other states from interfering with oxygen shipments. Just to make sure, Delhi began sending police escorts with the oxygen tankers.

To fill the gaps, tankers were hastily imported from other countries, but some were incompatible with Indian oxygen tanks. Mr. Sisodia recalled his emergency response team Googling different solutions in one frenzied effort that went from 4 a.m. to 8 p.m.

“Sir,” Mr. Bidhuri asked him, “will we be able to save the people tonight?”

On April 23, the central government sent Delhi 308 metric tons of oxygen, less than half of its need.

At Jaipur Golden, all 250 beds were full. Outside the emergency room, patients slumped in wheelchairs waited to be admitted.

Seema Awasthi, a school principal from north Delhi, was propped up on her I.C.U. bed, a ventilator feeding her lungs. At 8:45 a.m., she sent a text to her family: “I have to be fine soon. Trying to be strong.”

“We fear a big tragedy may happen due to the oxygen shortage and we will never be able to forgive ourselves,” Delhi’s chief minister, Arvind Kejriwal, told him on the video call.

Delhi had taken over the city’s oxygen distribution the day before, directing tankers according to need. Spreadsheets showed the supplies each hospital had left.

In desperate moments, officials could dispatch two city-owned trucks with stopgap supplies, answering anguished Twitter messages, texts or calls from a doctor or a patient’s relative. Though the system would eventually be computerized, Mr. Bidhuri, the oxygen distribution official, initially used a wire-bound notebook.

Jaipur Golden typically received its daily oxygen shipment by 5 p.m., said Dr. D.K. Baluja, its medical director. This time, though, the truck didn’t appear. At Inox, an oxygen supply company, nobody picked up the phone.

Contacted by The Times, Inox said it distributed oxygen “per government of Delhi’s instructions.” Delhi officials said they would supply records for April 23 but then did not.

Jaipur Golden was nearly out. But employees and families said they had not been told. Some family members said they would have sought canisters on Delhi’s streets had they known.

Around 7 p.m., Ms. Bansal was summoned to the I.C.U. Her husband, Atul, had suffered a heart attack. The oxygen levels on his ventilator were fluctuating. He was writhing in his bed, gasping for air.

“I couldn’t bear to watch,” she said. She left.

Dr. Baluja later said that Jaipur Golden had a backup system of 50 oxygen cylinders. That ran out, too, he said.

At 10:28 p.m., Ruchika Gupta telephoned from Amsterdam to check on her father, Satish Kumar Gupta. Right after the phone was answered, the receiver was put down.

“My father was probably dying at that moment,” Ms. Gupta said.

Rohit Gupta, her brother, arrived at Jaipur Golden around 11:30 p.m. It was chaos, he said. People dashed in carrying oxygen cylinders. Distraught relatives threatened to kill doctors. One man paced around shouting: “I will not leave these doctors alone if something happens to my mother!”

Two tankers arrived close to midnight: a large one from Inox, seven hours late, and a smaller one from the Delhi government.

The next morning, Dr. Baluja appeared on television, weeping.

“They were my patients. They were my responsibility. They came on the faith of Dr. Baluja to Jaipur Golden Hospital,” he said. “And where did I put my faith? The government of India. Delhi government.”

The next week, a Delhi government committee formed to look into the deaths cited the “natural virulent course of the disease” and concluded that “shortage of oxygen as the cause of death could not be ascertained.”

Mr. Sisodia acknowledged that “we should have done better and we should have done more,” but said that his team had saved thousands of lives. Jaipur Golden, now facing a lawsuit from several families, declined to comment further.

Many of the families blame national, local and hospital officials for the deaths. Several are demanding a criminal investigation.

Ms. Bansal keeps a portrait of her husband by her bedside.

Every day she lights an incense stick by it.

“I miss him at every living moment,” she said. “They killed him.”

At This Instagram Hot Spot, All the World’s a Stage (and the Buffalo’s a Prop)