How Notre Dame Football Is Preparing Its Players For NIL 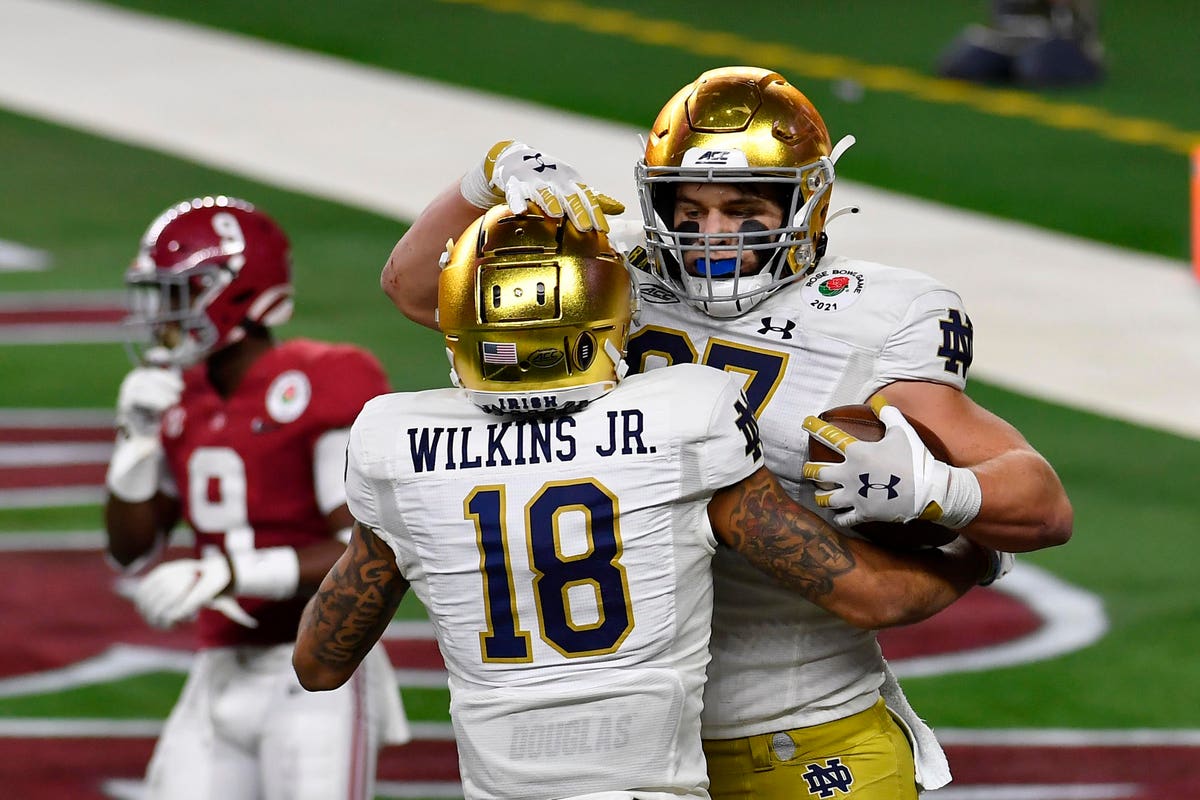 When it comes to Name, Image and Likeness marketing opportunities, Braden Lenzy suggests there are two types of modern college athletes:  Those who are profiting from NIL and those who are eager to do so.

“I’m open to it,” Lenzy, Notre Dame’s junior wide receiver, said recently. “I think anybody that says they aren’t probably doesn’t have any offers.”

With Brian Kelly’s 12th season set to open Labor Day weekend at Florida State, the Fighting Irish are doing their part to help everyone on their football roster navigate this mind-blowing new territory.

“As we told our team, let’s work together and figure it out,” Kelly said as fall practice opened. “Everybody wishes there was a clear doctrine on how we handle each situation that comes our way, but the goal is to collaborate: ‘Why are we doing it or why can’t we do this.’ ”

Kelly noted the similarities to social media’s explosion during his tenure and the way Notre Dame tried to get out in front of that phenomenon as well.

“Some programs said, ‘Hey, shut off your phones. Don’t use Twitter,’ “ Kelly said. “My response was, ‘Let’s use Twitter in a positive way. How can we be helpful?’ That’s our mindset and how we see NIL.”

While group licensing remains the safest space for Notre Dame-quality football players to profit from NIL, Wilkins noted the players have gathered a couple of times for overview presentations from university staffers. With the Mendoza School of Business a short bike ride away from the Guglielmino Athletics Complex, it’s hard to imagine any other top-10 program being more creative or prepared for what lies ahead.

“Notre Dame is good at all that stuff,” Lenzy said. “BK, that’s one of his strengths. He really does try to do everything beneficial for the student-athlete, whether it be NIL, recovery and all that stuff. They’re actively trying to help set up stuff and whatnot.”

So far only the offensive line, starters and backups alike, have cashed in publicly through a deal with Maryland-based Mission BBQ, which recently opened a new location a short drive from Notre Dame’s campus.

Sophomore tight end Michael Mayer, considered the most naturally talented player on the Irish offense, would seem to have the personality and the production to benefit immediately from NIL. However, he said “not right now” when asked if he might be announcing any agreements before the opener.

“I’m being pretty patient about it right now,” Mayer said. “My focus is school and football. It’s only my sophomore year. I potentially still have 2-3 more years left, so I’m just focusing on my football right now.”

A potential NFL first-rounder in the spring of 2023, Mayer isn’t likely to make it to his senior year on campus. Yet, even after tying for the team lead with 42 catches as a freshman, Mayer appears to be in no rush to cash in.

“Maybe a few small little deals here and there, but nothing major right now,”  he said. “I don’t want to have anything looming over my shoulders.”