How Peppers Proliferated Around the Planet 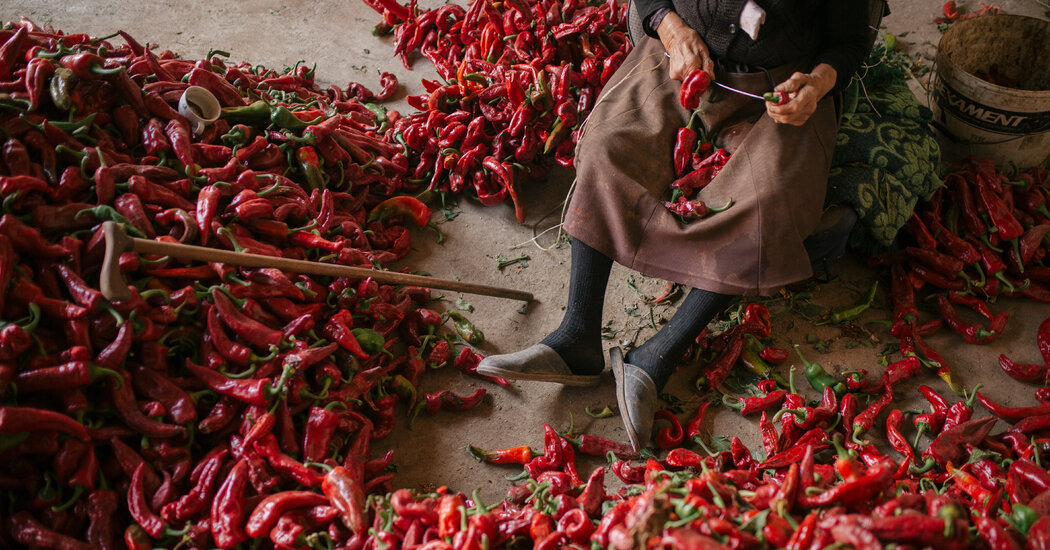 Peppers are cosmopolitan, a vegetable that comes in far more varieties than there are nations in the world. One day you can slice a mild orange bell pepper to dip in hummus. Another you may roast red peppers and blend them into a dip or a sauce of their own, like ajvar or romesco. Poblano peppers can add some heat to a dish, or even become a meal like chile rellenos. But watch out for those Carolina Reaper peppers.

All of these dishes have in common the humble pepper plant, or Capsicum spp. The plant originated in Central and South America and eventually crossed the oceans in the hands of traders, says Pasquale Tripodi of the CREA Research Center for Vegetable and Ornamental Crops in Italy. In a paper published on Monday in The Proceedings of the National Academy of Sciences, Dr. Tripodi and European colleagues shared the results of their studies of the genetics of more than 10,000 samples of peppers from around the world.

Their findings reveal intriguing details about the plant’s global travels, such as how one colonial power’s trading networks may have spread peppers far and wide, and how some of the plants ended up sweet and crisp while others gained their fiery edge.

Millions of seeds rest in a handful of chilly, insulated chambers around the globe known as plant gene banks. These repositories keep seeds in storage for the use of crop breeders and researchers, allowing access to the widest possible variety of traits. A wild eggplant whose roots can withstand mold, a hardy tomato that doesn’t wilt in scorching heat, a wheat whose heads stay together in punishing rains — these plants can be bred with more tasty varieties in hopes of producing crops for an uncertain future.

Gene banks tend their denizens carefully, periodically sprouting seeds and collecting fresh ones to make sure most of their collections remain viable. But relatively few researchers have turned the tools of genetic sequencing on this ocean of genes.

Because gene banks keep track of where each sample was collected, it should be possible to see where a plant, such as the pepper, ended up and whether there are genetic links between certain regions, as well as what happened once they arrived in a new area and were altered by newly minted pepper aficionados.

Dr. Tripodi and his colleagues focused on the most widely consumed pepper group, Capsicum annuum, the species that is grown into bell peppers of all colors, cayenne peppers and jalapeños. The researchers found that Europe and Asia shared a variety of types, suggesting that peppers moved along trade routes between East and West. There were also links between Eastern European peppers and those in the Middle East, perhaps reflecting Ottoman trade routes. The team speculates that Portuguese traders, who in the 16th century moved between South America, Europe, Africa and Asia, may have transported some peppers along with them, helping to explain similarities between African peppers and those on either end of this long axis.

Once peppers gained admirers in a new location, farmers seem to have made their own selections over the years; peppers in Eastern Europe were sweeter and less pungent, while East Asian peppers were small and fiery. The researchers uncovered genes associated with these traits and others, which may be of use to breeders in the future.

The researchers also made a surprising discovery as they checked the data for duplications — a sizable fraction of gene banks’ pepper collections were not unique. That meant that the gene banks were unwittingly maintaining multiple copies of seeds, perhaps in part because without genetic testing it is difficult to say whether a new packet of seeds is identical to an existing packet. As sequencing grows cheaper and easier, it may alter how gene banks work, not just revealing the history or providing information for breeders but shaping the process of saving these plants for the future.