How Republican Governors Are Responding to Biden’s Vaccine Mandate 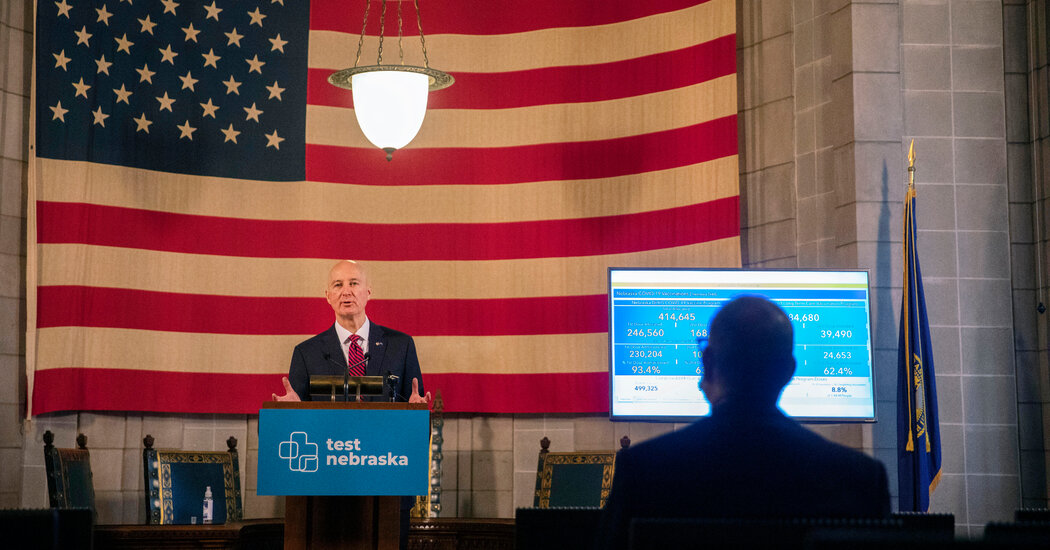 Republicans officials on Sunday made further threats of legal action against President Biden’s sweeping plan to get tens of millions of American workers vaccinated, with even those who openly urge that people get shots claiming that the mandate violated civil liberties.

Gov. Pete Ricketts of Nebraska said he would do everything in his power to push back against Mr. Biden’s plan, which requires either vaccinations or weekly testing for workers at private companies if they have more than 100 employees.

“But it should be a personal health care choice. This is not something that the government should mandate. And somebody shouldn’t have to make the choice between keeping their job and getting a jab in the arm.”

Mr. Ricketts blamed vaccine hesitancy partly on what he described as confused and changing guidance from the Centers for Disease Control and Prevention. “By having the government force it on, you’re not building the trust. This is a process that’s going to take time to bring people along, and that’s why it should be a personal choice.”

Gov. Asa Hutchinson of Arkansas, who has encouraged vaccinations and even sought to have the state legislature ease a bill banning mask mandates that he signed in April, said Mr. Biden’s plan “disrupts and divides the country.”

“We’ve historically had vaccination requirements in schools, but those have always come at the state level — never at the national level,” he said on the NBC program “Meet the Press.”

Mr. Hutchinson argued the widespread vaccination increases could be achieved by measures like increasing community engagement and sending trusted messengers to talk to people about the inoculations. Arkansas has one of the country’s lowest vaccination rates; about 39 percent of the eligible population have not received even a single shot.

Some public health experts argued that the Biden plan could potentially do more harm than good. “I think that the downside of this mandate — in terms of hardening positions, and taking something that was subtly political and making it overtly political — could outweigh any of the benefits we hope to achieve,” Dr. Scott Gottlieb, the former commissioner of the Food and Drug Administration, said on the CBS’s “Face the Nation.”

Dr. Gottlieb pointed to the nation’s current vaccination rate for adult Americans, arguing that, even with other childhood immunizations, which are mandated, “we are not going to get above 90 percent.” About 74 percent of eligible Americans have received one dose or more, according to data compiled by The New York Times.

And he said the federal mandate could deter companies from requiring the vaccine while they await the verdict on the promised legal challenges.

“In the near term, a lot of businesses that might have mandated vaccines are now going to sit on their hands and say, ‘I’m going to wait for OSHA to tell me just how to do it and give me more political cover,’” Dr. Gottlieb said. “So in the near term, it could actually discourage some vaccination.”