How U.S. Afghans Watch the Chaos with Horror 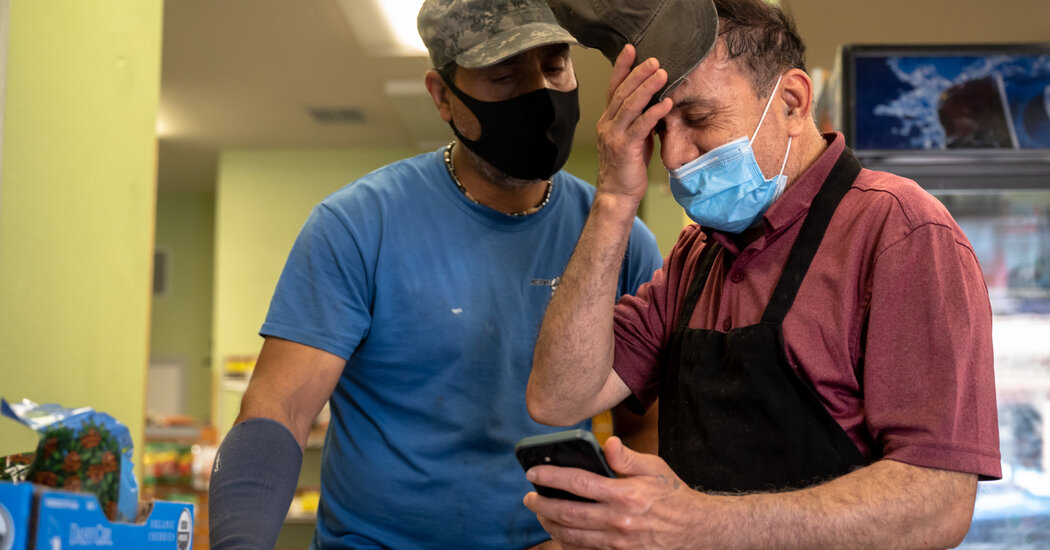 SACRAMENTO — They call themselves the lucky people, the Afghans who made it out in time.

Lucky, they say, but guilt-ridden, shocked and angry.

Tens of thousands of Afghans have resettled in the United States in the two decades since the American invasion of Afghanistan, some of them arriving as recently as a few days ago.

This week they described the anguished conversations with the family members they left behind and the piercing fear that the Taliban, the country’s new masters, might retaliate against their relatives.

“What is going to happen to them if they get a knock on the door?” said Rizwan Sadat, who flew into the United States from Afghanistan last week after a career working for American and international aid agencies. “Our hearts are crying for them, for our brothers, for our sisters, for our mothers.”

Nothing has reassured the Afghan men and women now living in America, not the videos posted by their friends on social media of the quiet, deserted streets of Afghan cities nor the statements by the Taliban that they are planning an “inclusive government.”

Mohammad Sahil, a former employee at the United States Agency for International Development in Afghanistan who resettled in Sacramento several years ago, said the images of desperate residents clinging to airplanes in Kabul can seem almost unreal to Americans.

“This is kind of a movie or a drama for the United States,” Mr. Sahil said. “When you watch a movie, maybe you are scared but then you walk out of the movie theater.”

“But this is real for us,” Mr. Sahil said, referring to the trauma of knowing his relatives are still in Afghanistan. “We haven’t slept, we haven’t eaten. I can’t work.”

At least 132,000 foreign-born Afghan immigrants were living in the United States as of 2019, according to the American Community Survey, along with younger generations who were born in this country. Afghans have migrated to the United States in waves, after the Soviet invasion in 1979, during the first Taliban rule in the 1990s and after the American invasion in 2001.

In the 1980s, resettlement agencies moved many of them to the San Francisco Bay Area because it was cheap, a community program provided cultural resources and the weather reminded Afghans of their home, said Rona Popal, the executive director of the Afghan Coalition, a community assistance organization. Afghans have also congregated in New York, Sacramento, in Southern California and in Virginia.

Even Afghans who have lived in the United States for decades say they felt a pit in their stomach watching the speed of the Taliban takeover.

“We’ve all left a little piece of ourselves in Afghanistan,” said Khaled Hosseini, the author of the 2003 best seller “The Kite Runner” who settled in San Jose four decades ago. “Although we have established lives in the United States, we have an emotional stake in what happens in Afghanistan.”

Over the last few days resettled Afghans have spoken by phone to relatives in Kabul who described harrowing moments and the anxiety of not knowing what comes next. Relatives told them that the Taliban were roving door-to-door to question people about their connections to Americans. One man described how a former colleague was sleeping in a different home every night to evade interrogation. Relatives have deleted photos and messages from their phones, anticipating that they might be seized.

A woman in California described how she was alarmed when a call to her sister-in-law in Kabul was punctuated by gunfire.

And in one of the most harrowing stories relayed to relatives here, a man described how his mother’s aunt was trampled to death on Sunday night while trying to board a plane.

“People couldn’t breathe on board,” said Shah Mohammad Niazy, who worked with the United States military when he was still in Afghanistan. “She died on the ground before it took off.”

Afghan Americans say they are committed to getting their extended families out of the country and into the United States. But they are under no illusions it will be easy.

On a drive through an Afghan neighborhood in Sacramento, Yasar Ghafoori, a former military intelligence interpreter for the U.S. Army in Afghanistan, said he planned to borrow $20,000 to get visas and plane tickets for 34 members of his extended family.

As he pointed to two-story apartment blocks where hundreds of Afghan families rent two-bedroom apartments for around $1,200 a month, Mr. Ghafoori said America was a paradise for him.

“But not without my family,” he said. “My family is everything for me.”

Mr. Ghafoori, who is single, has urged his parents, brothers and sisters to leave their house in Nangarhar Province — “leave everything,” he said. He will find the money somehow.

Farhad Yousafzai, an insurance agent, knows how hard that can be.

He extracted his two brothers from Kabul on a flight to Turkey last week but only after what he described as “black market” dealings.

And even with tickets in their hands, the airline threatened to cancel their reservations in favor of passengers willing to pay more. The brothers prevailed but it was “very, very difficult,” Mr. Yousafzai said.

The cultural heart of the Afghan community in the United States is Fremont, a bedroom community on the edge of Silicon Valley where Tesla assembles its electric cars. Representative Ro Khanna, the congressman whose district includes part of Fremont, estimates that 100,000 Afghans live in area. As home prices have climbed above $1 million, some Afghans have moved to cheaper parts of the country.

But the city still retains Afghan kebab shops, mosques and a number of specialty markets.

Maiwand Market is filled with families buying loaves of naan and fresh cuts of halal lamb and goat meat.

Behind the bread counter on Monday afternoon was Ho Karimi, who was showing a series of video clips from Afghanistan. Sayed Sayedi, a plumber shopping at the market, peered at the images and shook his head. “It’s a big tragedy,” he said.

Afghanistan has been in a near-perpetual state of war for the past four decades, yet Afghans inured to that suffering said they were still stunned by how rapidly the country had fallen to the Taliban.

In San Diego, a young woman named Mya described the fear and uncertainty that accompanies her family’s attempts to communicate with relatives still in Kabul.

They shudder when no one picks up the phone.

She and her family have been working with an immigration lawyer to relocate her elderly grandmother to the U.S. Until then, her family is enduring a wait that feels excruciating.

Mr. Khanna said his office had been “bombarded” by calls asking why the United States seemed so ill-prepared for the collapse of the Afghan government. Mr. Khanna, a Democrat, is critical of the Biden’s administration’s handling of the U.S. withdrawal.

“The question that people keep asking me is why couldn’t they have evacuated people before they pulled out troops out,” Mr. Khanna said. “What is shocking and hurtful is the lack of sufficient concern for our allies, for vulnerable Afghans, for women and children.”

As they watch the turmoil, Afghans in the United States are clinging to the thinnest reed of hope that the Taliban understand that Afghanistan is not the same place that they ruled in the 1990s.

Mr. Hosseini, the author, says a class of urban professionals, which includes many women, has helped make Afghanistan into a “vastly different country.”

“I hope the Taliban realize that whips and chains and guns and gallows is not the way to run a country,” he said.