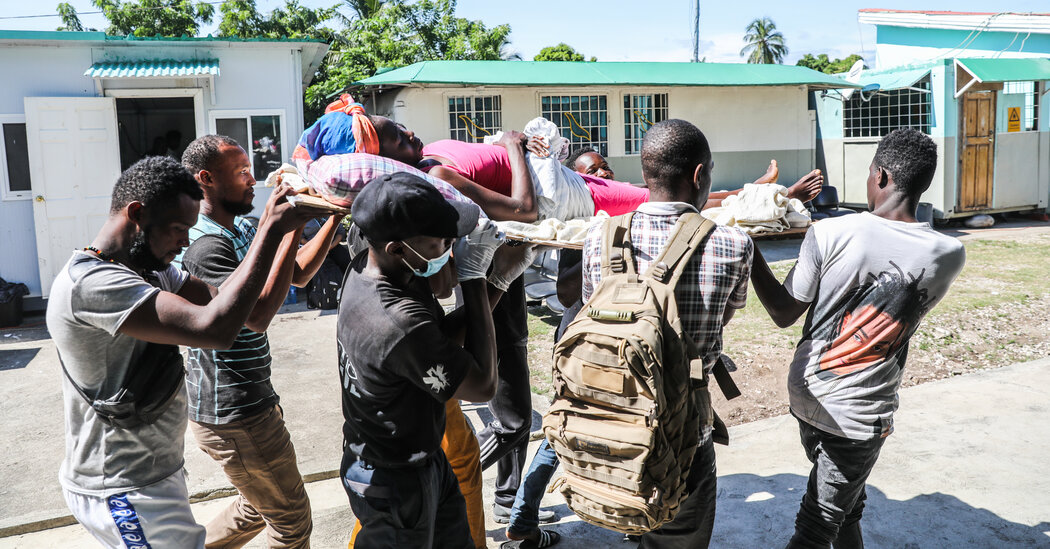 LES CAYES, Haiti — With broken bones and open wounds, the injured jammed into damaged hospitals or headed to the airport, hoping for mercy flights out. A handful of doctors toiled all night in makeshift triage wards. A retired senator used his seven-seat propeller plane to ferry the most urgent patients to emergency care in the capital.

A day after a magnitude-7.2 earthquake killed at least 1,300 people and injured thousands in western Haiti, the main airport of the city of Les Cayes was overwhelmed Sunday with people trying to evacuate their loved ones to Port-au-Prince, the capital, about 80 miles to the east.

There wasn’t much choice. With just a few dozen doctors available in a region that is home to one million people, the quake aftermath was turning increasingly dire.

“I’m the only surgeon over there,” said Dr. Edward Destine, an orthopedic surgeon, waving toward a temporary operating room of corrugated tin set up near the airport in Les Cayes. “I would like to operate on 10 people today, but I just don’t have the supplies,” he said, listing an urgent need for intravenous drips and even the most basic antibiotics.

The earthquake was the latest calamity to convulse Haiti, which is still living with the aftereffects of a 2010 quake that killed an estimated quarter-million people. Saturday’s quake came about five weeks after the Haitian president, Jovenel Moïse, was assassinated, leaving a leadership vacuum in a country already grappling with severe poverty and rampant gang violence.

The authorities in Haiti were scrambling to coordinate their response to the quake, mindful of the confusion that followed the one in 2010, when delays in distributing aid to hundreds of thousands of people worsened the death toll.

Prime Minister Ariel Henry promised Sunday at a news conference “to give a more appropriate response than the one we gave in 2010,” with a single operation center in Port-au-Prince to coordinate the aid efforts.

Dr. Paul Farmer, co-founder of the relief agency Partners in Health, which oversees several hospitals in Haiti, said the country’s ability to respond to an earthquake — with new emergency medical services and training programs — had greatly improved in the intervening years.

“The things we had at our disposal in 2010 versus now are night and day,” Dr. Farmer said.

But he acknowledged that Haiti still faced what he called “old problems” like bad roads, poor transportation and political volatility, fueled by gang violence, which could make managing the disaster all the more difficult.

Among the organizations extending help over the weekend were the United States Agency for International Development, which sent a search-and-rescue team, and the U.S. Coast Guard, which said it had deployed helicopters to provide humanitarian aid. The Pan American Health Organization sent experts to coordinate medical support, and UNICEF was distributing medical supplies to hospitals in the south and helping with water and sanitation.

The quake — more powerful than the one 11 years ago — triggered widespread landslides, with rocks and other debris blocking many roads, making it hard to reach the injured and needy. The road from Les Cayes, on the coast, to the Marceline district about 16 miles away in mountains overlooking the city, was cracked down the center, with boulders and tree branches blocking it.

Families in the area were sleeping in the open, their homes severely damaged or completely destroyed. Others were too nervous about the aftershocks ripping through the region to feel comfortable taking shelter under a roof.

In Marceline on Sunday, Honore Faiyther had just discovered his aunt’s body among the remaining pews of St. Agnes church when an aftershock jolted the town, rattling corrugated tin roofs that had collapsed and were strewn across the ground.

Mr. Faiyther closed his eyes and waited for the trembling to pass as he sat on a slab of concrete that had been part of the church wall. Just steps away, the body of his aunt, Ilda Pierre, lay on a metal grate, covered by a white sheet.

Ms. Pierre had been cleaning the church with a friend when the quake struck.

“My aunt has four children, and she’s very active in our community and volunteered in this church for five years,” Mr. Faiyther said. “Her husband is in denial. He cannot face that she is dead.”

The Rev. Jean Edy Desravines said he had been preparing a sermon for Sunday “to inspire parents to send their children back to school next month, to have them rejoin our community after such a tough year,” referring to the pandemic.

“Now there is no school to even send them to,” the priest said, explaining that the primary school his church runs had also been flattened.

“In a small town like this, the church is all we have,” he said.

The mayor of Marceline, Fenicile Marssius, dropping by to check on the priest, said her own home had been destroyed.

“We have had no assistance from the government,” Ms. Marssius said. “Maybe they have so much to do in the cities that they cannot reach us in these remote areas.”

In the town of Mazenod, outside Les Cayes, people watched as volunteers tried to extract two women from the rubble of a collapsed church guesthouse, the metallic crush of a bulldozer heaping the debris aside as men used their bare hands to move concrete slabs.

Nearly the entire complex of the Chapel of St. Eugene of Mazenod was destroyed, including the seminary and secondary schools the church runs.

“I don’t think there’s any hope,” said Melchirode Walter, 31, whose sister, Solange Walter, 26, was trapped. “We have been calling her name since yesterday and knocking on the concrete, but there is nothing.”

The Rev. Corneille Fortuna, who helps run the complex, said he narrowly survived when his residence on the property caved in. He was trapped by bricks blocking the entrance until friends were able to pull him out.

“Haiti is a country where every disaster is possible,” Father Fortuna said. “And there is never any help.”

Officials in Les Cayes estimated that only 30 doctors served the entire western region. They are now confronting the overwhelming prospect of treating thousands of grievous injuries from caved-in buildings.

All the main hospitals are damaged; doctors worked overnight to erect the temporary operating room near the airport in Les Cayes because local hospitals were in such bad condition.

At the General Hospital of Les Cayes, two surgeons operated on eight people with dwindling supplies on Sunday but were forced to turn most away.

After their procedures, the patients were wheeled in their beds in the baking Caribbean sun to the parking lot, which has become an outpatient center.

Dr. James Pierre, one of the surgeons, had just finished operating on a 5-year-old girl with abdominal trauma who had been crushed by a wall of her home as she played in the yard.

“We can only do simple surgeries here, we have nothing to work with,” Dr. Pierre said as he watched the girl’s chest labor with every breath under a blanket in the open air.

Medical files, stacked two feet high atop a metal table, lay adjacent to an open tap where the patients and their families and friends washed. Chickens ran in between the injured.

At the airport, Herve Foucand, a former senator from the region of Les Cayes, was using his small propeller plane over the weekend as a flying ambulance, taking the most needy to Haiti’s capital, a 45-minute flight. He said he had evacuated 50 people since Saturday. “The hospitals are broken inside,” he said.

“I have 30 people in serious condition waiting for me,” Mr. Foucand added. “But I only have seven seats.”

Palmera Claudius, 30, lay in the bed of a truck her relatives had hired to take her to the airport, the entire left part of her face swollen.

She had been home in Camp-Perrin, on the outskirts of Les Cayes, when she felt her whole house jolt. As she tried to run outside, a wall collapsed on her.

Like many others headed to the airport, she was hoping for a free flight to the capital, since her family could not afford a ticket.

Ms. Claudius said that she could not feel her legs and that the clinic in her town did not have the capacity to take an X-ray to determine what was wrong.

Taking a break from tending to the injured, Dr. Destine, the orthopedic surgeon, was trying to get his own father, also a surgeon, to the United States for treatment. His father suffered major head trauma from a fallen roof, he said.

Dr. Destine said he expected thousands of people to get potentially deadly infections unless proper supplies were delivered in time. The prospect of malnutrition, too, was likely to exacerbate the natural disaster for an already impoverished and hungry population, he said.