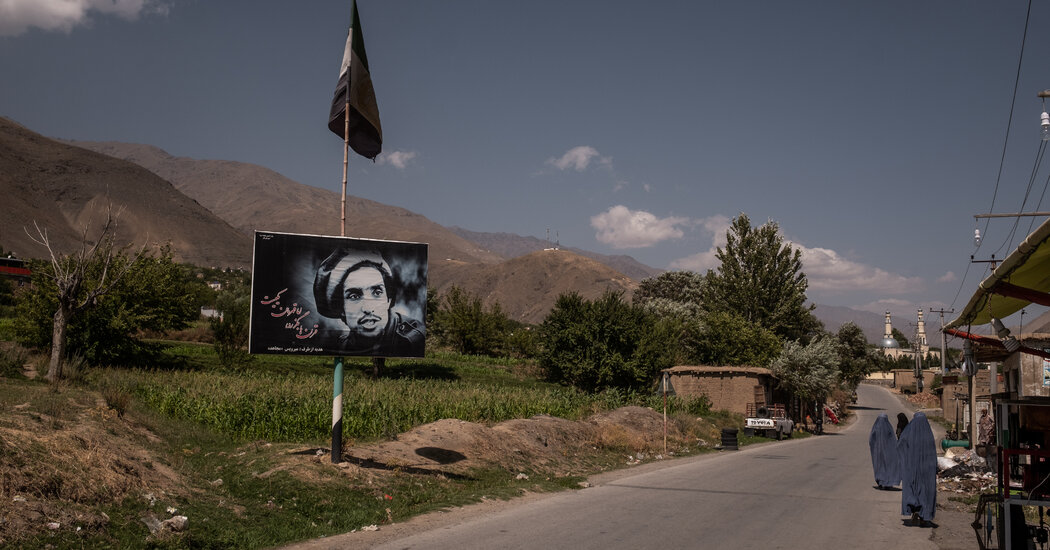 The first signs of armed resistance to the Taliban have come from a narrow valley with a history of repelling invaders.

Just days after the Taliban swept into the capital and toppled the government in a lightning offensive, a group of former mujahedeen fighters and Afghan commandos said they had regrouped and begun a war of resistance in the last area in Afghanistan not under Taliban control.

The man leading them is Ahmad Massoud, the 32-year-old son of the storied mujahedeen commander Ahmad Shah Massoud, stepping into his father’s footsteps 20 years after his death to pick up his dogged fight against the Taliban.

But their struggle faces long odds. Strategic as their redoubt is, the resistance fighters are cut off and surrounded by the Taliban, have supplies that will soon start dwindling, and have no visible outside support.

For now the resistance has merely two assets: the Panjshir Valley, 70 miles north of Kabul, which has a history of repelling invaders, and the legendary Massoud name.

Spokesmen for Ahmad Massoud insist he has already attracted thousands of soldiers to the valley, including remnants of the Afghan Army’s special forces and some of his father’s experienced guerrilla commanders, as well as activists and others who reject the Taliban’s Islamic Emirate.

The spokesmen, some of whom were with him in the Panjshir Valley and some who were outside the country drumming up support, said that Mr. Massoud has stocks of weapons and matériel, including American helicopters, but needs more.

‘‘We’re waiting for some opportunity, some support,” said Hamid Saifi, a former colonel in the Afghan National Army, and now a commander in Mr. Massoud’s resistance, who was reached in the Panjshir Valley by telephone on Sunday. “Maybe some countries will be ready for this great work. So far, all countries we talked to are quiet. America, Europe, China, Russia, all of them are quiet.’’

In an opinion article in The Washington Post last week, Mr. Massoud appealed for the United States, Britain and France to support his uprising by sending arms, putting President Biden in a very difficult position.

Backing the Taliban’s enemies could infuriate them, worsen what is already a chaotic American exit from Afghanistan and incite the Taliban to break the main promise they made if American forces withdrew — to sever ties with terrorists.

But refusing to help Mr. Massoud carries its own risks, including global criticism that Mr. Biden turned his back on Afghan resistance fighters struggling to retake their country from an extremist group with a long history of repression and brutality.

The elder Massoud built his formidable reputation by holding out against repeated Soviet offensives in the 1980s, using his wits and the high mountain ranges of the Hindu Kush to survive. He inflicted devastating ambushes on Russian supply convoys, earning a grudging respect from several Soviet generals among his opponents.

He spearheaded the mujahedeen assault on Kabul that toppled the Communist government in 1992, and was appointed minister of defense. Yet he never enjoyed full-throated support from Washington or from neighboring Pakistan, bloodied his hands in the devastating civil conflict in Kabul, and withdrew to his stronghold in the Panjshir Valley when the Taliban rose to power and seized the capital in 1996.

He held out against the Taliban regime for five years, rallying a united opposition against a movement that he saw as totalitarian and alien to Afghan traditions in its dogmatic fundamentalism, even as he steadily lost territory.

He warned the West about the threat of terrorism from Al Qaeda. Under his leadership, the Panjshir Valley became a kind of forward listening post for Western intelligence, a free enclave of the minority Tajik ethnicity in a country dominated by the Pashtun regime of the Taliban, and a constant thorn in its side.

His son is clearly hoping to play the same role as his father, who was assassinated by Al Qaeda two days before Sept. 11, 2001 as a kind of gift to the Taliban regime that hosted it.

But there are critical differences between then and now. The father had supply lines that ran across the border to Tajikistan, allowing the resistance to replenish itself over a long period.

Since then, the Taliban have learned their lessons well from past military conflicts, and they made sure to cut off Afghanistan’s borders and isolate the Panjshir Valley before moving on Kabul.

The younger Mr. Massoud also has little military experience, though he was educated at the Royal Military College at Sandhurst in Britain and King’s College, London, and earned a degree in war studies before returning to Afghanistan in 2016. This weekend, he sounded a defiant note.

“We confronted the Soviet Union, and we will be able to confront the Taliban,” Mr. Massoud told the Dubai-based Al Arabiya television channel Sunday. His father held off nine Soviet offensives, and he insists he is up to the legacy.

He left in haste for the Panjshir Valley on Aug. 15 in a military helicopter after the Taliban broke through government defenses on the western side of Kabul and President Ashraf Ghani fled the country.

Vice President Amrullah Saleh left for the valley at the same time, vowing to fight rather than sit under the same roof as the Taliban. He was attacked twice on the road but made it through, said Mohammad Zahir Aghbar, who has been serving as Afghanistan’s ambassador to Tajikistan, in an interview last week.

It is possible that Mr. Massoud and his followers have taken a tough stance to gain leverage in the bargaining over any new government.

But conflict was already underway. Mr. Massoud’s supporters said their forces had attacked a Taliban convoy in Andarab, on the north side of the Salang tunnel, inflicting heavy casualties, downing a bridge and cutting a critical highway that links the capital to the north.

The Taliban announced they were sending forces to subdue the province in a statement on Twitter: “Hundreds of the Islamic Emirate’s mujahedeen are heading to the Panjshir to bring it under control, after the local authorities refused to hand it over peacefully.”

The resistance forces were on high alert Monday as they prepared for Taliban retaliation, Mr. Dashty said.

An Agence France-Presse correspondent on Tuesday reported seeing “machine gun nests, mortars and surveillance posts fortified with sandbags” set up by the National Resistance Front to defend its positions in the Panjshir Valley.

Former senior officials in the recently deposed Afghan government were hesitant about the movement’s chances. “I don’t think that resistance will last long without international assistance,” said a former top official. “I think the Taliban will crush it in the coming months,” he said, speaking anonymously because of the sensitivity of the issue.

“He is in a more difficult situation than his father,” said Rahmatullah Nabil, a former head of the National Directorate of Security and vehement opponent of the Taliban, referring to the younger Mr. Massoud. Not only did the son have less experience than his father had when he resisted the Taliban, but he lacked outside support, he said. The elder Massoud had received limited support from regional neighbors including Russia, India, Iran and Tajikistan.

“The countries who supported his father, they are not interested,” Mr. Nabil said. Nevertheless, he said, Mr. Massoud could probably pull through.

Opponents of the Taliban were not all on the same page yet, too.

“We’re changing to a guerrilla war,” said Colonel Saifi of the former Afghan army who is now with Mr. Massoud. “We don’t need thousands and thousands of troops to fight this war. In this war we need 20 guys, they make ambushes. We won’t fight like a government army, we’ll fight like the mujahedeen fought the Russians.”

Matin Bek, an ex-member of the government’s negotiating team with the Taliban, suggested that some opponents were waiting to seeing how the Taliban would govern, but that the resistance could inspire a rallying of the opposition. “If they fight the Taliban, it could become a hope for the entire nation,’’ he said.

But for now, “We don’t know the fate of this resistance,” he added. “Will they resist, or will they negotiate? I don’t know who is backing them.”

The most prominent ex-official to take refuge in the Panjshir Valley is Mr. Saleh, a former head of the National Directorate of Security and himself a former associate of the elder Massoud. Last week he proclaimed himself Afghanistan’s legitimate president, dismissing the Taliban’s seizure of power.

“The Taliban haven’t shown any readiness to engage in meaningful negotiations,” Mr. Saleh wrote in a text message. “They want allegiance, surrender or subordination. Our offer is very simple. People have to have a say in any decision determining the character of the state.”

Carlotta Gall reported from Istanbul, and Adam Nossiter from Paris. Reporting was contributed by Jim Huylebroek in Kabul, Afghanistan and Andrew Kramer in Moscow.