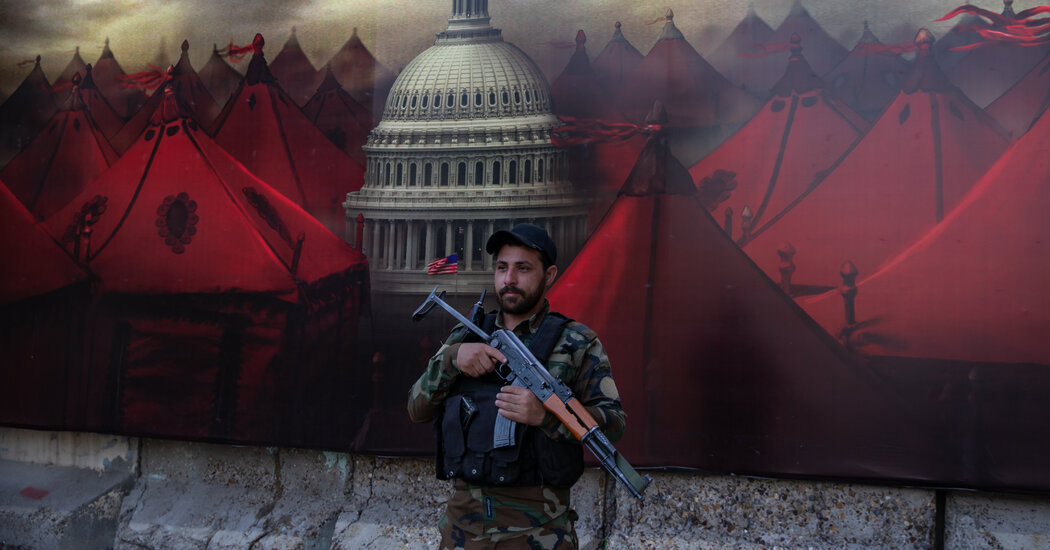 BAGHDAD — Outside the headquarters of Asaib Ahl al-Haq, one of the main Iranian-backed militias in Iraq, fighters have posted a giant banner showing the U.S. Capitol building swallowed up by red tents, symbols of a defining event in Shiite history.

It’s election time in Iraq, and Asaib Ahl al-Haq — blamed for attacks on American forces and listed by the United States as a terrorist organization — is just one of the paramilitary factions whose political wings are likely to win Parliament seats in Sunday’s voting. The banner’s imagery of the 7th century Battle of Karbala and a contemporaneous quote pledging revenge sends a message to all who pass: militant defense of Shiite Islam.

Seventeen years after the United States invaded Iraq and toppled a dictator, the run-up to the country’s fifth general election highlights a political system dominated by guns and money, and still largely divided along sectarian and ethnic lines.

The contest is likely to return the same main players to power, including a movement loyal to the Shiite cleric Muqtada al-Sadr, a coalition connected to militias backed by Iran, and the dominant Kurdish party in the semiautonomous Kurdistan Region of Iraq. Other leading figures include a Sunni businessman under U.S. sanctions for corruption.

In between are glimmers of hope that a reformed election law and a protest movement that prompted these elections a year early could bring some candidates who are not tied to traditional political parties into Iraq’s dysfunctional Parliament.

But persuading disillusioned voters that it is worth casting their ballots will be a challenge in a country where corruption is so rampant that many government ministries are more focused on bribes than providing public services. Militias and their political wings are often seen as serving Iran’s interests more than Iraq’s.

Almost no parties have put forth any political platforms. Instead they are appealing to voters on the basis of religious, ethnic or tribal loyalty.

“I voted in the first elections and it did not meet our goals and then I voted in the second election and the same faces remained,” said Wissam Ali, walking along a downtown street carrying the bumper of a car he had just bought at a market. “The third time I decided not to vote.”

Mr. Ali, from Babil province south of Baghdad, said he taught for the last 14 years in public schools as a temporary lecturer and has been unable to get a government teaching position because he does not belong to a political party.

Starting in October 2019, protests intensified, sweeping through Baghdad and the southern provinces demanding jobs and basic public services such as electricity and clean water. The mostly young and mostly Shiite protesters demanded change in a political system where government ministries are awarded as prizes to the biggest political blocs.

The protesters called for an end to Iranian influence in Iraq through proxy militias that now are officially part of Iraq’s security forces, but only nominally under government control.

In response, security forces killed almost 600 unarmed protesters, according to the Iraqi High Commission for Human Rights. Other estimates place the toll at 800. Militia fighters are blamed for many of the deaths and are accused of killing dozens more activists in targeted assassinations.

The current prime minister, Mustafa al-Kadhimi, came to power last year after the previous government was forced by the protests to step down.

While early elections were a key campaign promise, Mr. Kadhimi has been unable to fulfill most of the rest of his pledges — bringing to justice those behind the killings of activists, making a serious dent in corruption and reining in Iranian-backed militias.

While the parties already in power are expected to dominate the new Parliament, changes in Iraq’s electoral law will make it easier for small parties and independent candidates to be elected. That could make this vote the most representative in the country’s postwar history. Despite faults in the election process including, in previous years, widespread fraud, Iraq is still far ahead of most Arab countries in holding national and provincial polls.

“It’s not a perfect system but it’s much better than the old one,” said Mohanad Adnan, an Iraqi political analyst.

He said he believed the protests — and the bloody suppression of them — had resulted in some established parties losing part of their support. Some candidates are hoping to capitalize on a backlash against traditional political blocs.

Fatin Muhi, a history professor at al-Mustansiriya University in Baghdad, said she was encouraged by her students to run for office. Ms. Muhi, who is running with a party affiliated with the anti-government protests, said many people in her middle-class constituency had planned to boycott the elections but changed their minds.

“When they found out we were candidates for the protest movement they said ‘we will give you our votes,’” Ms. Muhi said. “We will be an opposition bloc to any decision issued by corrupt political parties.”

In addition to anger and apathy, serious fraud in the last parliamentary election has fueled the boycott campaign.

To counter voter distrust that led to a record low turnout in the 2018 polls, election workers have been going to people’s doors in some neighborhoods with voter registration cards. Election authorities “wanted to make it as easy as possible for voters who don’t have trust in the system,” said Mr. Adnan, the political analyst. “They are not motivated to register or pick up their cards.”

The country’s 21 million registered voters include an estimated one million old enough to vote for the first time. Despite TikTok campaign spots and other tactics aimed at reaching young voters, many of them are boycotting the election.

“Our country is for us and not for them,” said Helen Alaa, 19, referring to the political parties and the militias. Ms. Alaa, a first-year college student who said she would not vote, was at a demonstration commemorating slain protesters. “We tried so hard to explain to them but they always try to kill us. Now they try to calm down the situation so they can win in the election and bring back the same faces.”

Ahmed Adnan, 19, said, “Every election there is a candidate who comes to a mosque near our house and promises to build schools and pave streets.” The candidate keeps being elected, he said, but none of those things have been done.

To help support his family, Mr. Adnan, who is unrelated to Mohanad Adnan, works at a shop selling ice, making about $8 a day. He is trying to finish high school by studying at home and going in only to take exams.

His friend, Sajad Fahil, 18, said a candidate came to his door and offered to buy his vote for $300.

“He refused to say which party he was running for,” said Mr. Fadhil, who studies at a technical institute and is also boycotting the vote.

In some areas where there is more money and races are more hotly contested, the going price for buying a vote is up to $1,000, according to several tribal officials.

Sheikh Hameed al-Shoka, head of the Anbar Tribal Leaders Council, said groups commissioned by some political blocs were buying up people’s biometric voting cards by the thousands. Under that scheme, voters agree to relinquish their cards and later retrieve them outside polling sites — ensuring that they actually do turn out — where they then vote as directed.

In a race between the powerful Sunni speaker of Parliament, Mohammad al-Halbousi, and Iraqi businessman Khamis al-Khanjar, Sheikh Hammeed said he had told his followers to support Mr. Khanjar. The tribal leader said both political figures were suspected of corruption, including Mr. Khanjar whom he acknowledged having “corrupt friends.”

“But his friends have worked in the government and offered something for people,” said the tribal leader. “The others did not offer anything. They only provided for themselves.”