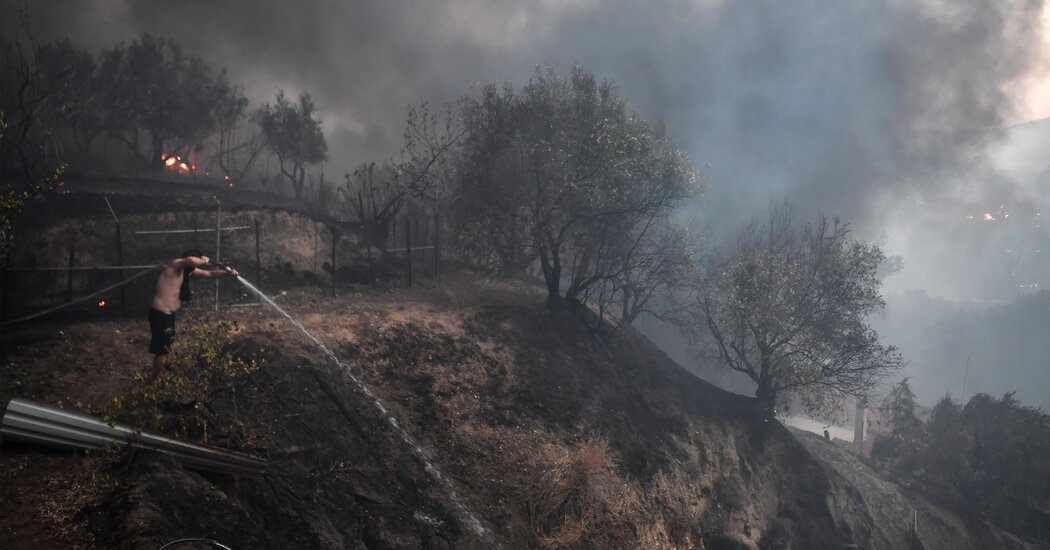 ATHENS — Shells of houses and cars left gutted by flames. Stretches of forest reduced to ash. Tourists evacuated by boat from once idyllic beaches where the skies are thick with smoke. As southern Europe grapples with one of its worst heat waves in decades, deadly forest fires have engulfed stretches of the region, bringing a newly reopened tourism industry to a halt and forcing mass evacuations.

The raging fires pushed residents from their homes in villages on the Greek mainland and islands and across neighboring Turkey, and forced tourists to abandon beachside destinations across the region.

Critics have attacked President Recep Tayyip Erdogan over the government’s handling of the deadly disaster, with opponents denouncing the lack of aerial support for the firefighting efforts.

Hundreds of square miles of forest burned as more than 180 fires blazed across the country. At least eight people died, hundreds were injured and dozens lost their homes.

In Mugla, a Turkish province popular with tourists and full of farmland, residents angered by the uncontrolled fires blocked roadways and halted cars they deemed suspicious.

“Maybe they burned the forest,” shouted Muharrem Duygu, a resident of Mugla who was seen stopping a car in a video posted on Twitter. “My forest is in flames right now.”

Firefighters were able to control a fire approaching a power plant in Milas after working through the night to save the facility. Trees on the grounds of the power plant were burned, but the main site was not seriously damaged, officials said.

At ancient Olympia, the birthplace of the Olympic Games in southern Greece, the local authorities and army personnel dug fire lines around the archaeological site to keep the flames at bay as firefighters battled the blazes through the night.

After a visit to the site on Thursday, Prime Minister Kyriakos Mitsotakis said the country was facing “an unprecedented environmental crisis.”

“Unfortunately, despite the fact that we have more aerial support per capita than any other country, it is impossible for those aircraft to be available at every moment all over the country,” he said. He added that he fully understood “the anger, rage, exasperation of people who have seen their property destroyed.”

The Greek government on Thursday increased the involvement of the military in tackling the fires as dozens of blazes continued to burn across the country, fueled by a record-breaking heat wave that has battered the region.

A large fire that broke out north of Athens on Tuesday destroyed scores of homes and thousands of acres of forest. It had been partly contained, but flared up again later in the day.

Tourists visiting the capital were met with a thick curtain of smoke hanging over the city’s iconic sites. A short distance north, residents were forced from their homes. Some tried in vain to use hoses to keep the flames from engulfing their properties as a fire rekindled north of Athens on Thursday afternoon and spread rapidly, prompting more evacuations — including at Malakasa, a state camp from which asylum seekers would be evacuated to other facilities at the instruction of civil protection authorities, according to Greece’s migration ministry.

Earlier on Thursday, Vasilis Vathrakoyiannis, a fire service spokesman, said 120 fires were burning around the country, with the largest and most worrying at ancient Olympia and on the island of Evia.

On Wednesday afternoon, the Greek Coast Guard evacuated dozens of people from the seaside village of Rovies on the island after a huge fire moved through a nearby pine forest. Residents of several villages on the island were forced to abandon their homes, and the local authorities and the army dug fire lines to try to protect a monastery. The local church in the village of Kechries sounded its bells early Thursday morning to urge its residents to flee.

In photos from the island, the sun was barely visible through the dense smoke that hung over cliff-side homes.

Greek television channels flicked between video of the fires raging in the north of Athens, on Evia and on the Peloponnese Peninsula, awakening memories of the summer of 2007 when Greece battled multiple large fires across the country that killed scores of people.

While scientists have not yet had time to evaluate the connection between the current wave of extreme temperatures and global warming, it fits an overall trend that has seen climate change play a role in extreme weather in Europe. Research has shown that in major heat waves across Europe in recent summers, climate change has been a significant worsening factor.

Efthymis Lekkas, a professor of natural disaster management at the University of Athens, warned of “an enduring nightmare in August,” and urged the authorities to be ready for potential flooding after the destruction of large stretches of forest.

Greece’s General Secretariat for Civil Protection warned of an “extreme” risk of fires on Friday, as intense winds are forecast to worsen the situation.