In ‘Queenpins,’ A Kitchen Sink Full Of Ideas 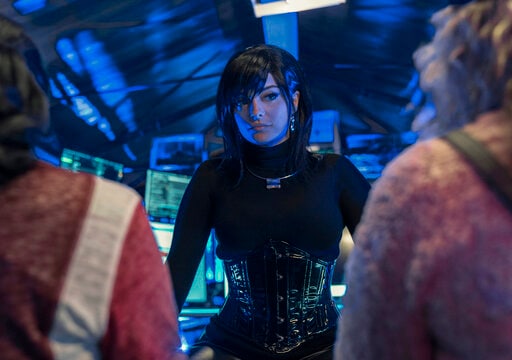 The timing was perfect. The very moment I sat down to write about Queenpins, the inspired-by-actual-events tale of a coupon scheme gone awry, a tantalizing coupon popped up on my screen.

It offered 20 percent off, for a popular brand of socks. I didnt need socks. But 20 percent? Maybe I did need socks? I suddenly recalled what Ken, the hapless loss prevention officer played by a terrific Paul Walter Hauser, said in the film about why people use coupons: Its not usually because they need the stuff. Its the buzz the coupon high they get when they score a deal.

This alone could have made the germ of a movie: the psychology of discount shopping. But like many themes here, it gets muddled into a confusing though often highly entertaining pastiche of ideas and styles. Writer-directors Aron Gaudet and Gita Pullapilly offer up a commentary on the value of work. Theres a critique of capitalism, and an intriguing buddy relationship between two women with very different lives but shared goals.

Theres also the Robin Hood theory that some crime is justifiable, especially when youre helping homemakers and hurting conglomerates wholl just write off the losses anyway. And theres well, we could go on. But more is less, in this case.

The shame is that an excellent cast could have been better served. Aside from Hauser, we have the appealing duo of Kristen Bell and Kirby Howell-Baptiste as the coupon criminals. Bell is an expert at using her endlessly perky exterior to hide devious intentions, and as for Howell-Baptiste, somehow she makes us root for her no matter what shes doing like negotiating a gun sale to a possible right-wing militia.

Connie (Bell) is a frustrated housewife in a loveless marriage to a dry IRS auditor (Joel McHale in a fairly thankless role). Unsuccessful fertility treatments have put the couple in debt. In some particularly trite dialogue, Connie refers to her miscarriage as a failure to get to the finish line.

Theres one thing, though, that gives Connie satisfaction: coupons. At the supermarket, shes presented with a bill of $138.55, but triumphantly hands over a wad of discounts to get to $16.45. That was impressive, notes the man behind her.

One day Connie eats some stale Wheaties and decides to complain to the company. Shes thrilled to get a coupon for a free box. And she wonders: What if she had an endless supply of such coupons and could sell them for profit? She enlists neighbor JoJo (Howell-Baptiste), who seems to understand from the start that this may constitute, oh, a crime?

The duo figures out that coupons are printed at a factory in Mexico. All they need is an insider. They find a worker who earns only $2 an hour and is happy to oblige.

They rack up millions within months. Under the impression that they need to launder the money, they buy a bunch of stuff Lamborghinis, a boat to sell and make it clean. Theres a commentary on lax gun laws when they hit a gun show and buy up a stash. That probably shouldnt have been that easy, muses JoJo.

In any case, the women sail ahead in their exploits, with no idea that Ken (Hauser), a low-level employee determined to do his job well, is on their trail.

Ken is, in many ways, a jerk. He wont give a poor old lady a break when she unknowingly presents an invalid coupon for hemorrhoid cream. Told shes a longtime valued customer, Ken replies he doesnt care if she is Dame Judi Dench.

Its baffling, though, how that clever line is in the same movie as a tasteless, overlong scene where Ken soils himself during a stakeout, among other toilet references. Did this suddenly become a slapstick comedy for teenage boys?

But Ken perseveres, joined in the pursuit by a gun-toting postal inspector (Vince Vaughn, in a tailor-made role) who bristles at unkind postal service references.

Like the inspector, everyone here feels they should be better valued. I knew I was worth more, Connie says at a key moment. This alone would have been a great organizing theme. Instead, we get a kitchen sink full of coupons.

Queenpins, an STX Entertainment release, has been rated R by the Motion Picture Association of America for language throughout. Running time: 110 minutes. Two stars out of four.