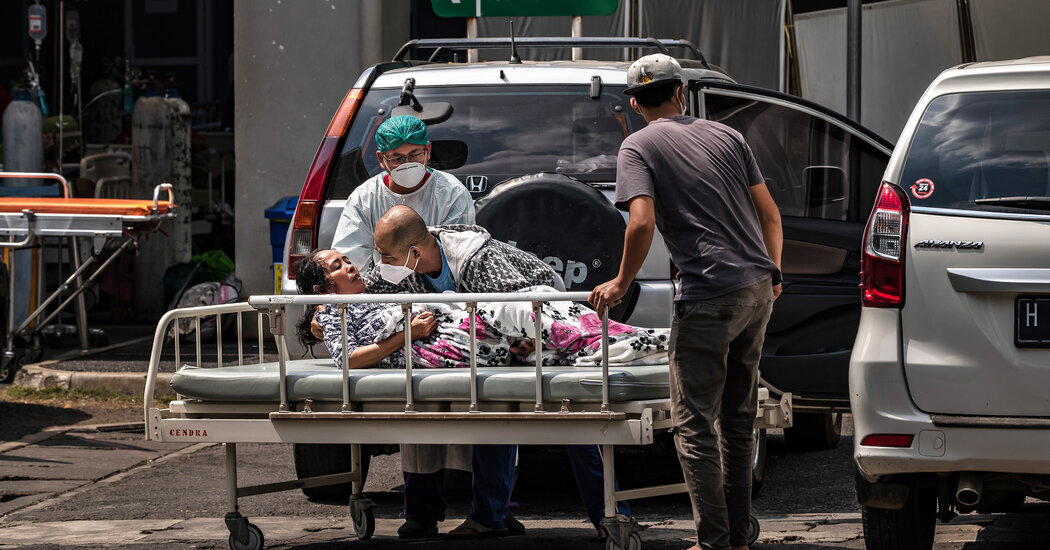 Indonesia reported more than 54,500 cases coronavirus cases on Wednesday, its third record daily rise in a row as the country has surpassed India’s current daily caseload.

A seven-day rolling average of daily cases in the two countries showed them running neck and neck, but India’s caseload has been steadily declining while Indonesia’s has been skyrocketing, according data collected by the Center for Systems Science and Engineering at Johns Hopkins University.

Over the past few weeks, hospitals on Java island have overflowed with patients and residents have scrambled to buy medical oxygen to treat family members at home. Hundreds of people have been reported to have died of the virus at home because of a lack of oxygen and as a result of an overwhelmed health care system.

“Based on the last three days data, I can say clearly that Indonesia has become the new epicenter in the world,” said Dicky Budiman, an Indonesian epidemiologist at Griffith University in Australia, who has long urged the Indonesian authorities to implement firmer measures to control the spread of the virus.

Over the past two weeks, the daily numbers of infections have nearly doubled, and on Wednesday, Indonesia reported 991 new deaths.

Experts believe that the Delta variant is behind the surge in cases in Indonesia, the world’s fourth most populated country. By contrast, India’s daily case count, which peaked at more than 414,000 in early May, has fallen to about 40,000.

The outbreak in Indonesia is the latest example of the widening gap between Western countries and other nations during the pandemic. Countries like Britain and the United States have reopened their economies and so far have been able to absorb a surge in cases with limited hospitalizations and deaths thanks to successful vaccine rollouts. Others, like India and now Indonesia, have lagged behind in vaccinations and face devastating consequences from Delta’s spread.

Studies suggest that vaccines remain effective against the Delta variant, but only 13 percent of Indonesia’s population of 270 million has received one dose of a coronavirus vaccine, while less than 6 percent has been fully vaccinated, the Our World in Data project at the University of Oxford.

By comparison, nearly half of the U.S. population has been fully inoculated, and on Wednesday Britain passed the threshold of having vaccinated two thirds of its population.

In Indonesia, most injections came from the Sinovac Biotech vaccine; at least 20 Indonesian doctors who were fully vaccinated with Sinovac have died from the virus.

The neighboring Philippines, which also has struggled to contain the virus, has banned arrivals from Indonesia, and other countries, including Japan and Saudi Arabia, have begun evacuating their citizens from Indonesia.

On Sunday, Indonesia received three million doses of the Moderna vaccine donated by the United States. Indonesian officials said that the first priority for these doses would be to give booster shots to nearly 1.5 million health workers.

Macron to the French: Vaccinate or Else