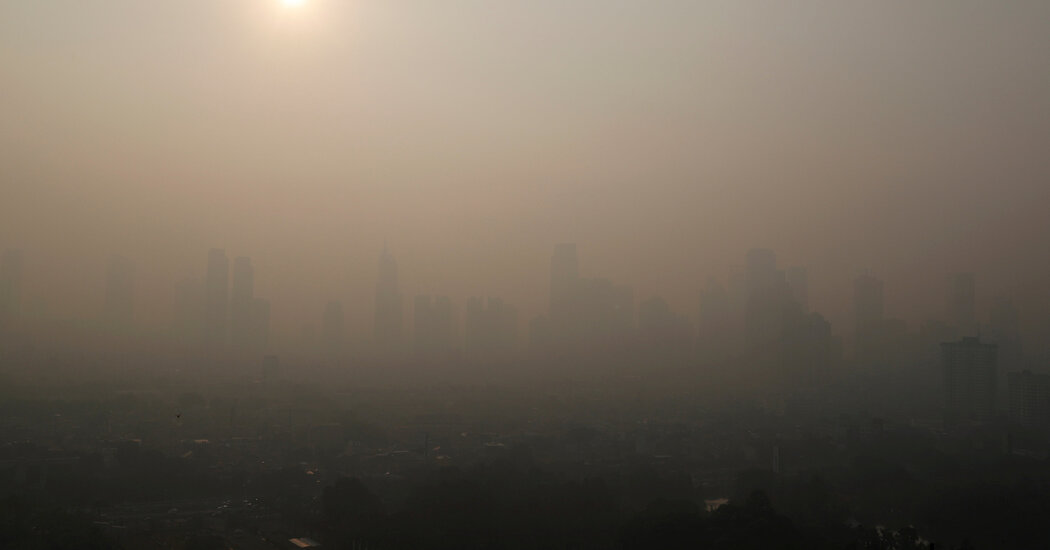 Five years ago, a scan of Istu Prayogi’s lungs showed the kind of damage that comes from smoking cigarettes. But in his case, he had never smoked. Instead, he spent hours a day in traffic in Jakarta, the capital of Indonesia and one of the world’s most polluted cities.

A computer science teacher, Mr. Istu began wearing a face mask, as his doctor recommended, but that was only a short-term solution. So he joined a rare citizen lawsuit against the government seeking to force Indonesia’s president, Joko Widodo, and other government officials to address the city’s pervasive pollution.

A three-judge panel is expected to rule as early as this week whether the president, three of his cabinet ministers and three provincial governors have been negligent by failing to curb the city’s air pollution.

The Indonesian suit seeks to require national and local governments to set stricter standards for hazardous pollutants and actively enforce them in the Jakarta metropolitan area, a megacity of more than 29 million people.

Since the suit was filed two years ago, some government agencies have made efforts to tighten their standards and to improve enforcement. In court, they have argued that the government’s efforts are adequate and fulfill their responsibilities under the law.

But even lawyers for the government acknowledged during the trial that the city’s air pollution affected them and their family, a video recording of one hearing showed.

Jakarta’s governor, Anies Baswedan, is open to working with the plaintiffs in the case in trying to solve the city’s pollution problems and improve the air, said an adviser, Irvan Pulungan. “The governor doesn’t see this lawsuit as a disturbance to the government’s work but as a vehicle for collaboration.”

Jakarta, with nearly 11 million people, is the largest of five cities that have grown together to create a vast urban region that extends into three provinces. The sprawling area suffers from inadequate roadways, massive traffic jams and few green spaces. It is also a low-lying region and prone to flooding.

The environmentalists who brought the suit say that many of the worst sources of pollution are outside Jakarta’s city limits and that presidential leadership and regional efforts are essential to address the problem.

A month after the lawsuit was filed, President Joko proposed moving the capital to a new city to be built on the island of Borneo, leaving Jakarta’s pollution problems behind.

A study released last week by the British consulting firm Verisk Maplecroft found that Jakarta was the city most at risk from environmental factors out of the 576 cities analyzed. The study noted that Jakarta is “plagued with dire air pollution” and faces threats from seismic activity and flooding.

One of the 32 plaintiffs in the suit is Yuyun Ismawati, a co-founder of the environmental group, Nexus3 Foundation, and a recipient of the 2009 Goldman Environmental Prize. She points out that Indonesia’s air pollution standards are much looser than the levels recommended by the World Health Organization. But even these standards are not adequately enforced, she said, and as a result, many people suffer from asthma and other respiratory illnesses.

Children are especially vulnerable to ailments caused by pollution because their bodies are still developing, she said. “I am worried about the future of young people in Indonesia.”

Research indicates that long-term exposure to air pollution can worsen the effects of Covid-19. Indonesia, the world’s fourth-largest country, has reported more than 1.7 million cases, the largest number in Southeast Asia.

Studies show that vehicle emissions are the largest single source of air pollution in Greater Jakarta, followed by coal-fired power plants. Vehicle inspections, to the extent they occur, are inadequate, Ms. Yuyun said, and the power plants do not have adequate filters.

Another major source is small-scale industrial activity that often relies on primitive methods that lack environmental safeguards, such as melting and recycling lead batteries, and burning wood, plastic or tires to generate heat. These often go unregulated.

“Everyone has the right to live in a healthy environment,” Ms. Yuyun said.

The suit, which was filed in Central Jakarta District Court, names the president, the ministries of health, environment and home affairs and the governors of the three provinces, Jakarta, West Java and Banten.

In a brief submitted in support of the lawsuit, the United Nations Special Rapporteur on human rights and the environment, David R. Boyd, pointed out that air pollution is the world’s deadliest environmental problem and is responsible for hundreds of thousands of premature deaths annually in Indonesia.

These deaths occur even though the solutions are well known and the government has a responsibility to implement them, he said.

“Protecting human rights from the harmful effects of air pollution is a constitutional and legislative obligation for governments in Indonesia, not an option,” he wrote.

Aditho Harinugroho, 36, began riding his bike on Jakarta’s crowded streets after a friend’s sudden death four years ago prompted him to change his lifestyle and embrace fitness. A freelance videographer, he sometimes rides 40 miles in a day.

Now, he is a plaintiff in the lawsuit. Even though he wears a cloth mask for the pollution, getting stuck in traffic can lead to coughing fits, he said. And after riding, his skin is blackened by the soot in the air.

“When I pass through a traffic jam hot spot, I definitely cough after that,” Mr. Aditho said. “When I wipe my face, it is black and I imagine that’s what gets into my lungs. It is impossible not to cough.”

President Joko has made Indonesia’s economic development his top priority. But Mr. Aditho said the government is focused on helping the rich, not improving the lives of ordinary people.

“Our government doesn’t care at all about pollution or the air quality of Jakarta,” he said. “We can see that from their policies.”