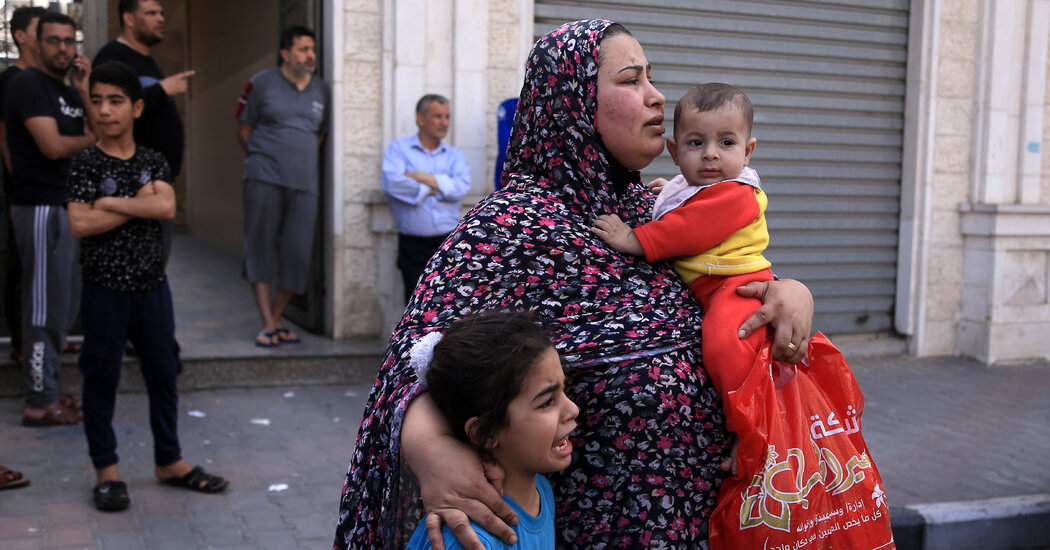 JERUSALEM — Israel and Hamas have agreed to a cease-fire to take effect on Friday morning, after more than 10 days of fighting, officials on both sides said on Thursday.

A senior Hamas official based in Qatar confirmed in a telephone interview that the group had agreed to a cease-fire mediated by Egypt, beginning at 2 a.m. on Friday, 7 p.m. Thursday in the Eastern United States. The Egyptian government confirmed the timing of the truce.

In Israel, Prime Minister Benjamin Netanyahu’s office announced that his security cabinet had voted unanimously to accept the Egyptian proposal, but cautioned “that the reality on the ground will determine the continuation of the campaign.”

In a broadcast address from the White House, President Biden lamented “the tragic deaths of so many civilians, including children,” and lauded Israeli and Egyptian officials. Noting that he had spoken with Mr. Netanyahu six times during the crisis, he said, “I commend him for the decision to bring the current hostilities to a close in less than 11 days.”

He vowed to marshal international resource to rebuild Gaza, adding, “we will do this in full partnership with the Palestinian Authority — not Hamas, the Authority — in a manner that does not permit Hamas to restock its arsenal.”

Since May 10, Hamas, the militant group that controls Gaza, has fired rockets into Israel, and Israel has bombed targets in Gaza. Sirens sounded in Israeli towns bordering the Gaza Strip in the minutes after the Israeli announcement, indicating that militants were continuing to fire rockets.

There has been intensive mediation between Hamas and Israel, which do not talk to each other directly, by several nations amid growing international pressure to stop the fighting, and both sides have said this week that they were open to a cease-fire.

The Israeli aerial and artillery campaign has killed more than 230 people in Gaza, many of them civilians, and badly damaged the impoverished territory’s infrastructure, including the fresh water and sewer systems, the electrical grid, hospitals, schools and roads. The primary target has been Hamas’s extensive network of tunnels for moving fighters and munitions, and Israel has also sought to kill Hamas leaders and fighters.

More than 4,000 rockets have been fired at Israel from Gaza since May 10, killing 12 people, mostly civilians.

Mr. Netanyahu met on Thursday with his security cabinet to review how far the military had gone in damaging Hamas, including destroying its network of tunnels and its arsenal of rockets and launchers. He and other Israeli officials had insisted that the bombardment of Gaza would continue as long as it took to safeguard Israeli security.

Diplomats from Egypt, Qatar, and the United Nations have mediated between the two sides. Hamas has never recognized Israel’s existence, and Israel considers Hamas a terrorist organization.

The cease-fire announcement also followed behind-the-scenes pressure from the Biden administration. The United States has no contact with Hamas, which it and the European Union also consider a terrorist group, but the administration has nevertheless played an important role in efforts to end the conflict.

It urged Mr. Netanyahu to agree to a cease-fire before international support for Israel evaporated, and it sent an envoy, Hady Amr, to meet in person with Israeli and Palestinian politicians this week. In a phone conversation on Wednesday, President Biden told Mr. Netanyahu that he “expected a significant de-escalation” in hostilities soon.

Past cease-fires between Israel and Hamas have often fallen apart, including in 2014, when truces collapsed at least twice during a seven-week war.

But the agreements can offer periods of calm to allow time for negotiating a longer-term deal. They also give civilians a chance to regroup and allow displaced people to return to their homes.

Hamas and Israel have been engaged in some form of conflict since the Palestinian group was founded in the 1980s. This particular round of military action began as Hamas fired a barrage of rockets at Jerusalem in response to several police raids on the Aqsa Mosque, one of the holiest sites in Islam, and the planned evictions of several Palestinian families from their homes in the city.

Even if the fighting pauses, its underlying causes remain: the battle over land rights in Jerusalem and the West Bank, religious tensions in the Old City of Jerusalem and the absence of a peace process to resolve the conflict. Gaza remains under a punishing blockade by Israel and Egypt.

Although the conflict forged a rare moment of unity among Palestinians across the West Bank, Israel and Gaza, it remains unclear whether it will significantly alter their standing and sense of oppression.

It also led to days of violent attacks within Israel by Arab and Jewish mobs, and highlighted decades of frustration among Arab citizens of Israel who account for about 20 percent of the population and face frequent discrimination.

The damage caused by the war has not been spread proportionately.

Hamas militants and their allies have fired thousands of rockets at Israel, most of which were intercepted by an Israeli antimissile defense systems or caused minimal damage. Those that hit Israel damaged several apartments, broke a gas pipeline and briefly paused operations at a gas rig and at two major Israeli airports.

Israel’s airstrikes damaged 17 hospitals and clinics in Gaza, wrecked its only Covid-19 testing laboratory, and cut off fresh water, electricity and sewer service to much of the enclave, deepening a humanitarian crisis in the already crowded and impoverished territory.

Dozens of schools in Gaza have been damaged or closed, and 72,000 Gazans have left their homes, mostly taking shelter in schools run by the United Nations.