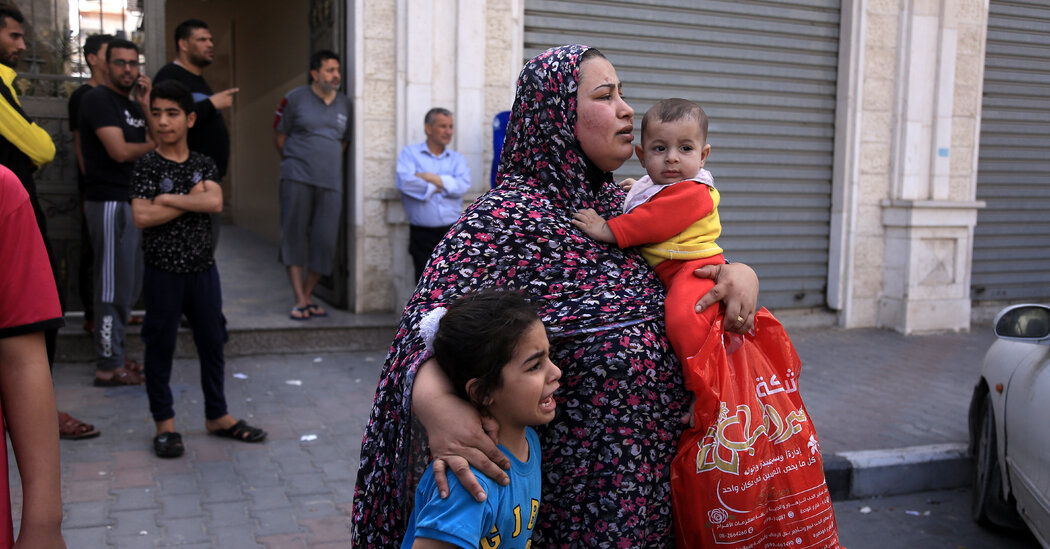 JERUSALEM — After more than 10 days of fighting that has taken hundreds of lives and inspired protests and diplomatic efforts around the world, Israel and Hamas agreed to a cease-fire on Thursday, officials on both sides said.

A senior Hamas official based in Qatar confirmed in a telephone interview that the group had agreed to the truce.

The agreement, mediated by Egypt, is expected to conclude an intensive exchange in which Hamas, the militant group that controls Gaza, fired rockets into Israel and Israel bombed targets in Gaza.

The Israeli aerial and artillery campaign has killed more than 230 people in Gaza, many of them civilians, according to the Gaza Health Ministry, and badly damaged the impoverished territory’s infrastructure, including the fresh water and sewer systems, the electrical grid, hospitals, schools and roads.

The primary target has been Hamas’s extensive network of tunnels for moving fighters and munitions. Israel has also sought to kill Hamas leaders and fighters.

Hamas and its allies in Gaza have fired more than 4,000 rockets at Israeli cities and towns, killing 12 people, mostly civilians, Israeli officials said.

But even as the near-simultaneous announcements were made late Thursday, sirens sounded in Israeli towns bordering the Gaza Strip, indicating that militants were continuing to fire rockets.

A statement from Mr. Netanyahu’s office cautioned that “it is the reality on the ground that will determine the future of the operation.”

Hamas, in a statement by the spokesman Taher al-Nono, said that “The Palestinian resistance will abide by this agreement as long as the occupation abides by it.”

The mini-war was the worst in Gaza since a 2014 battle that lasted seven weeks, included an Israeli ground invasion and killed about 2,200 people, mostly Palestinians.

But its rapid escalation and high civilian toll — more than 60 children were killed — shocked the world. It quickly became a fight that galvanized Palestinians in the occupied territories and elsewhere, set off explosions of ethnic violence in Israeli towns and cities, divided Jews around the world, fed anti-Semitism in Europe and tested President Biden, who faced pressure to both stand by Israel and press it to end the fighting.

In an address from the White House on Thursday, Mr. Biden lamented “the tragic deaths of so many civilians, including children,” and lauded Israeli and Egyptian officials. Noting that he had spoken with Mr. Netanyahu six times during the crisis, he said, “I commend him for the decision to bring the current hostilities to a close in less than 11 days.”

He vowed to marshal international resource to rebuild Gaza, adding, “we will do this in full partnership with the Palestinian Authority — not Hamas, the Authority — in a manner that does not permit Hamas to restock its arsenal.”

The fighting began a week ago Monday after an Israeli police raid on the Aqsa Mosque in Jerusalem, one of the holiest sites in Islam. The police said they entered the compound to stop stone-throwing Palestinian protesters.

Hamas, which had been threatening for weeks to respond with force to what it described as Israeli provocations in Jerusalem, fired a barrage of at least 150 rockets at Jerusalem and other Israeli cities. Israel immediately launched airstrikes on Gaza with the stated aim of stopping the rocket fire and forcing Hamas to pay a price for its actions.

The sudden escalation, which seemed to take Israeli officials by surprise, emerged after weeks of growing tension in East Jerusalem, the largely Palestinian part of the city that Israel captured in 1967 and later annexed, a move that most countries do not recognize.

Palestinians protesters had a backlog of grievances but the issue that catalyzed the protests was the planned eviction of six Palestinian families from their homes in the Sheikh Jarrah neighborhood, a move many Palestinians viewed as part of the ethnic cleansing of the city, replacing Palestinians with Jews in violation of international law governing occupied territory.

Israeli officials characterized the evictions as a private “real estate dispute” between the property’s Jewish owner and Palestinian tenants, and Israeli nationalists joined the protests to also stake their claim on Sheikh Jarrah.

Once the air war began, both sides characterized it as a battle for Jerusalem.

After the truce was announced, Hamas officials claimed victory, and early Friday loudspeakers in Gaza city called on the public to go into the streets “to celebrate the victory.”

“With the help of God, we were able to humiliate the enemy, its fragile entity and its barbaric army,” Abu Obaida, the spokesman of the military wing of Hamas, said in a statement. “The whole world saw the disgracefulness and shamefulness of this entity that boasts about hitting residential towers, civilian infrastructure and that takes pride in killing children and women.”

The fight was lopsided and it was largely up to Israel to determine when to end it. Military officials had a menu of targets they wanted to strike first, including militant leaders, rocket facilities and a network of tunnels deep underground that the Israeli military calls the “metro,” used to move fighters and weapons undetected.

Israeli officials said they took pains to strike only military targets, but in dozens of cases strikes on the tunnels knocked down adjoining residential buildings, causing civilian casualties.

Most of the rockets fired from Gaza were intercepted by an Israeli antimissile defense systems or caused minimal damage. Those that hit Israel damaged several apartments, broke a gas pipeline and briefly paused operations at a gas rig and at two major Israeli airports.

Israel’s airstrikes damaged 17 hospitals and clinics in Gaza, wrecked its only Covid-19 testing laboratory, and cut off fresh water, electricity and sewer service to much of the enclave, deepening a humanitarian crisis in the already crowded and impoverished territory.

Still, in Israel, there were concerns that the Israeli offensive had not gone far enough to finally defeat Hamas and assure that it would not be firing more rockets anytime soon.

Alon Davidi, the mayor of Sderot, an Israeli town on the border with Gaza that often bears the brunt of Hamas attacks, said Israeli officials “do not really want to defeat Hamas,” and settled for “temporary quiet” at the expense of residents of southern Israel.

Indeed, even as they celebrated the calm, both sides understood that this would not be the last battle between Israel and Hamas, which have clashed periodically since the Palestinian group was founded in the 1980s.

“This happened and keeps happening because these wars serve the bigger interests of both sides,” said Hussein Ibish, senior resident scholar at the Arab Gulf States Institute in Washington. “The Israelis get to pursue settlement activity and de facto annexation without having to deal with a peace process and being able to claim to have no partner to talk to. Hamas gets to pose as the champion of Palestine and Jerusalem.”

“And because it works for them, they will be satisfied and they are likely to repeat it at some point in the future,” he added.

The two sides do not talk to each other. Hamas has never recognized Israel’s existence and Israel considers Hamas a terrorist organization. Diplomats from Egypt, Qatar, and the United Nations have mediated between the two sides.

The cease-fire announcement also followed behind-the-scenes pressure from the Biden administration. The United States has no contact with Hamas, which it and the European Union also consider a terrorist group, but the administration has nevertheless played an important role in efforts to end the conflict.

It urged Mr. Netanyahu to agree to a cease-fire before international support for Israel evaporated, and it sent an envoy, Hady Amr, to meet in person with Israeli and Palestinian politicians this week. In a phone conversation on Wednesday, President Biden told Mr. Netanyahu that he “expected a significant de-escalation” in hostilities soon.

Past cease-fires between Israel and Hamas have often fallen apart, and this one could as well.

In July 2014, six days after the Israeli Army began bombarding Gaza, Egypt proposed a cease-fire that Israel agreed to. But Hamas said that it addressed none of its demands, and the cycle of rocket attacks and Israeli airstrikes resumed after less than 24 hours.

In all, nine truces came and went before the 2014 conflict ended.

The agreement could at least offer a period of calm to allow time to negotiate a longer-term deal but the deeper issues are rarely addressed.

Although the conflict forged a rare moment of unity among Palestinians across the West Bank, Israel and Gaza, it remains unclear whether it will significantly alter their standing.