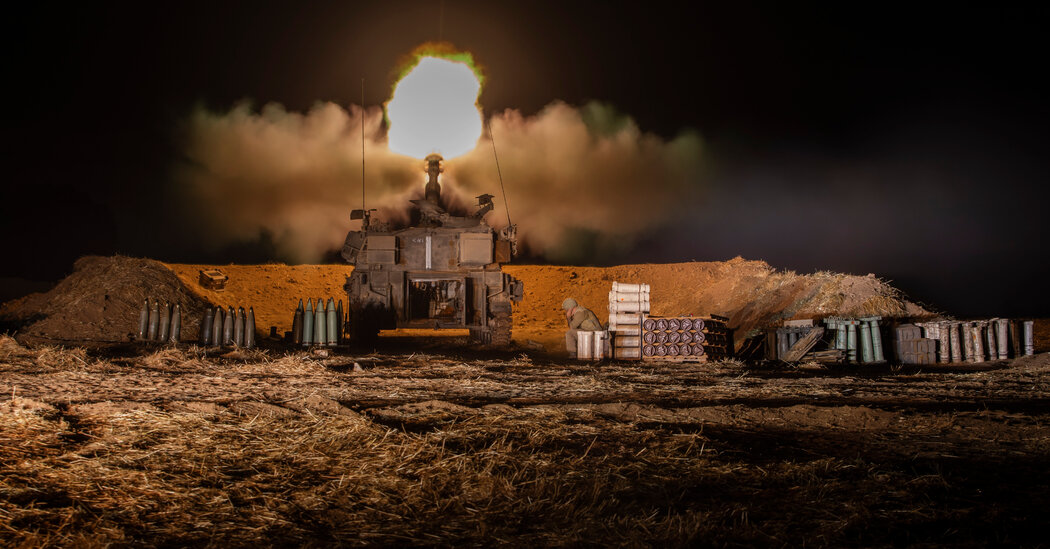 Israeli ground forces bombarded Gaza with artillery on Friday, escalating a conflict that has already brought Israeli airstrikes, Palestinian rocket attacks and sectarian violence on the streets of Israeli cities.

As world leaders called for calm and American and Egyptian officials tried to broker an end to the violence, the fighting that began on Monday ratcheted up instead, with dozens killed, most on the Palestinian side.

The Israeli military said that about 1,800 rockets had been fired into Israel from Gaza, the territory controlled by the militant group Hamas, while Gaza authorities reported more than 150 strikes from Israeli jets and drones, wounding more than 50 people overnight.

Mr. Conricus said the target of the attack was a network of tunnels underneath the Palestinian-controlled territory, through which Hamas is known to deploy militants and smuggle weapons. The spokesman described the complex network as a “city beneath a city.”

The Israel Defense Forces clarified that no Israeli troops were actually in Gaza despite earlier reports to the contrary. Instead, the army had amassed troops along the Gazan border and was shelling the territory from Israel.

“This operation will continue as long as it takes to restore peace and security to the State of Israel,” Prime Minister Benjamin Netanyahu said in a statement released early Friday.

Mr. Zilberman warned that the operation might intensify, saying that “all options are on the table, and forces are preparing and will continue to accumulate during the holiday” — the feast of Eid al-Fitr, which began on Thursday and marks the end of the holy Muslim month of Ramadan.

Hamas launched dozens of rocket volleys overnight at Israeli targets, killing an 87-year-old woman who was running to a safe room.

The latest round of Israeli-Palestinian unrest began Monday after clashes between protesters and the Israeli police at the Aqsa Mosque in Jerusalem. Hamas then began firing into Israel with the increasingly potent rockets it has built with the aid of Iran, and Israel responded with air attacks on Hamas and other militant targets in Gaza.

The Biden administration has called for peaceful resolution, while insisting that the rocket attacks on Israel must stop and refraining from any public criticism of Israel.

But the two entrenched sides did not appear ready to cede ground.

“The Americans are talking to me, the Egyptians are talking to me,” Israel’s defense minister, Benny Gantz, said during a video meeting with local council heads, “but I remain focused on the reason we went out on this campaign: to make Hamas and Islamic Jihad pay a price.”

The most surprising turn has been the violence between Jews and Arabs who have lived side by side in Israeli cities, with reports of gangs of people from one group pummeling members of another. Riots, stone throwing and protests continued overnight.

By Friday morning, the Israeli authorities reported that eight Israelis, including one soldier, had been killed. Palestinian health officials reported the death toll in Gaza at 115.

The crisis has come at a time when Israel’s political leaders are struggling to form a government after four inconclusive elections in two years. Mr. Netanyahu’s attempt to build a majority coalition in the Israeli Parliament failed, and his rival, Yair Lapid, had been invited to try to form a government.

As United States and Egyptian mediators headed to Israel to begin de-escalation talks, the antagonists were weighing delicate internal considerations before agreeing to discussions on ending the violence.

But even before the mediators got to work, Israel’s caretaker prime minister, Benjamin Netanyahu, appeared to have calculated that brute force was required first.

Early Friday, Israeli ground troops attacked Gaza — a potentially major move of escalation against the Hamas militants who have been launching hundreds of rockets at Israel. The move could extend the conflict and significantly increase the number of dead and wounded on both sides.

For the Palestinians, the indefinite postponement of elections last month by the Palestinian Authority president, Mahmoud Abbas, created a vacuum that Hamas is more than willing to fill. Hamas argues that it is the only Palestinian faction that, with its large stockpile of improved missiles, is defending the holy places of Jerusalem, turning Mr. Abbas into a spectator.

President Biden has spoken to Mr. Netanyahu and repeated the usual formula about Israel’s right to self-defense. The American leader also dispatched an experienced diplomat, the deputy assistant secretary of state Hady Amr, to urge de-escalation on both sides.

The Biden administration has resisted calls at the United Nations Security Council for an immediate discussion of the crisis, arguing that Mr. Amr and other diplomats need at least a few days to work toward a possible solution.

A proposal to convene an urgent meeting on Friday by the 15-member council was effectively blocked by the United States, diplomats said. Criticism of Israeli policies toward the Palestinians is widespread among members of the United Nations, and the United States has often stood alone in defending Israel, its key Middle East ally.

In Washington, Secretary of State Antony J. Blinken, when asked about American objections to a Security Council meeting, told reporters on Thursday that “we are open to and supportive of a discussion, an open discussion, at the United Nations,” but wanted to wait until early next week.

“This, I hope, will give some time for the diplomacy to have some effect and to see if indeed we get a real de-escalation,” Mr. Blinken said.

GAZA CITY — The taxi was loaded with everything the family would need for Eid al-Fitr, a holiday of feasts and cookies and new clothes that Israeli airstrikes on Gaza had, even before the assault by ground forces on Friday, transfigured into a time of explosions and fear.

In their four suitcases, the al-Hatu family — mother, father, son and daughter — had made sure to pack kaak filled with date paste, the biscuits traditionally shared among friends and family during Eid al-Fitr, which marks the end of the fasting month of Ramadan.

But they also brought enough clothing and food for several days — no one knew when it might be safe to go back home. Until then, to try to escape the airstrikes, they were going to stay with another daughter, on Al Mughrabi Street, a five-minute drive away.

They had all agreed: It would feel safer if they were all together, said the son, Mohammed al-Hatu, 28.

They were still unloading the taxi driver’s white Skoda sedan outside their temporary home shortly before noon on Wednesday when the first drone attacked.

Mr. al-Hatu’s sister had already lugged one suitcase inside. Mr. al-Hatu, who had been carrying another, staggered into the doorway of the building, bleeding, and collapsed.

Out on the street, their father, Said al-Hatu, 65, and the taxi driver lay dead. A few yards away, their mother, Maysoun al-Hatu, 58, was alive, but desperately wounded.

“Save me,” she begged Yousef al-Draimly, a neighbor who had rushed downstairs, he recounted. “I need an ambulance. Save me.”

An ambulance came, but Ms. al-Hatu did not make it.

Less than a minute after the first strike, a second drone strike ruptured the street, killing two more men: a worker at a laundry on the block and a passer-by. Another man, a barber whose shop was next to the laundry, was so badly wounded that his leg had to be amputated.

On Thursday, the first day of Eid al-Fitr, and the fourth day of the worst conflict between Israel and Palestinian militants in years, Gaza City was silent with fear, except when it was loud with terror: the sudden smash of Israeli airstrikes, the whoosh of militants’ rockets arcing toward Israel, the shouts of people checking on one another, the last moans of the dying

Palestinian militants have fired some 1,800 rockets from Gaza at Israel this week, far more than in previous clashes, according to Israeli officials, who on Thursday expressed surprise at the size of the barrage and the range of some of the rockets.

Israel’s “Iron Dome” antimissile system has shot down many of the rockets, and many others have struck places where they could do little damage. But some of the rockets, which are unguided, have hit populated areas, blowing up buildings and cars and killing seven people in Israel.

The increasingly sophisticated arsenal of rockets is the primary weapon of Hamas, the militant group that controls Gaza. Other groups there, like Islamic Jihad, also have them. Israeli intelligence estimates there are 30,000 rockets and mortar projectiles stockpiled in Gaza.

Hamas was believed before this week to have rockets with ranges approaching 100 miles, and many more with shorter ranges. Israel’s largest cities, Jerusalem and Tel-Aviv, as well as its primary airport, Ben Gurion airport, are within 40 miles of Gaza. The airport has been closed to incoming passenger flights because of the danger, with flights diverted to Ramon airport to the southeast.

But rockets have also been fired at Ramon, more than 110 miles from the nearest part of Gaza. A Hamas spokesman said the rockets aimed at that airport were a new type that could travel 155 miles, putting all of Israel within range of Gaza. The claim could not be verified, and it was not clear how many of the new rockets the group had.

In the past, many of the rockets fired from Gaza were smuggled in from Egypt, or assembled locally from smuggled parts. But in recent years, most have been made in Gaza, with technical assistance from Iran that Hamas has openly acknowledged.

As the Israel Defense Forces strike Gaza with jets and drones, a key target has been a network of tunnels underneath the Palestinian-controlled territory that the militant Islamic group Hamas is known to use for deploying militants and smuggling weapons.

A spokesman for the Israeli military described the complex network as a “city beneath a city.”

The tunnels were also the main rationale that Israel gave for its ground invasion of Gaza during its 2014 battle with Hamas. Israel’s leaders said afterward that they had destroyed 32 tunnels during the 2014 operation, including 14 that penetrated into Israeli territory.

At the time of that fighting, the Israel Defense Forces took reporters into a 6-foot-by-2-foot tunnel running almost two miles under the border to show the threat posed by the tunnels, and the difficulty that Israel has in finding and destroying them.

Here is an excerpt from what they reported:

Tunnels from Gaza to Israel have had a powerful hold on the Israeli psyche since 2006, when Hamas militants used one to capture an Israeli soldier, Gilad Shalit, who was held for five years before being released in a prisoner exchange.

The tunnels can be quite elaborate. The tunnel toured by journalists was reinforced with concrete and had a rack on the wall for electrical wiring. It also featured a metal track along the floor, used by carts that removed dirt during the tunnel’s construction, that could be used to ferry equipment and weapons, the Israeli military said.

Israeli officials acknowledge that it is a difficult technological and operational challenge to destroy all of the subterranean passageways and neutralize the threat they pose. The tunnels are well hidden, said the officer who conducted the tour, and some tunnels are booby-trapped.