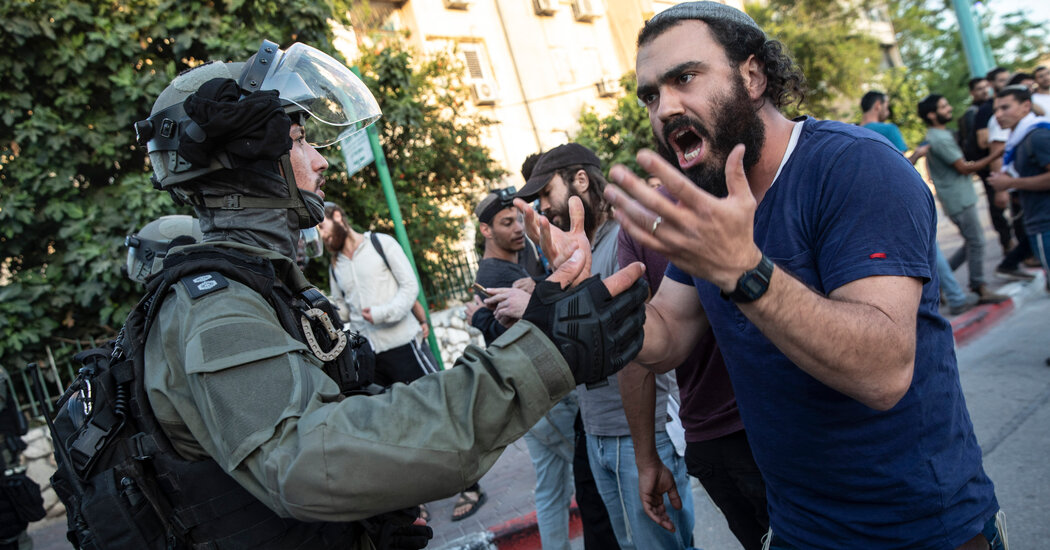 JERUSALEM — More than 1,550 people have been arrested over the past two weeks, the Israeli police said on Monday, on suspicion of involvement in the recent outbreak of mob violence between Arabs and Jews that convulsed cities across Israel.

Announcing the start of an even more concerted arrest campaign, the police said in a statement that thousands of police and border police officers had spread out across the country “to bring the rioters, criminals and all those involved in the disturbances to justice.”

Micky Rosenfeld, a spokesman for the police, said that 70 percent of those arrested were Arab citizens of Israel while 30 percent were Jewish. About 150 suspects have already been charged, the police said.

“The majority of incidents that took place were carried out by Arab Israelis who took to the streets and attacked Jewish civilians and police officers,” he said.

Aida Touma-Sliman, a lawmaker from the Joint List of predominantly Arab parties in the Israeli Parliament, said she believed that closer to 90 percent of those arrested were Arab citizens. She added that some had been detained by the Shin Bet internal security agency, rather than the police, and had been denied immediate access to lawyers.

The violence began as Palestinian protests in East Jerusalem and a police raid on the Aqsa Mosque, one of Islam’s holiest sites, spilled over into an 11-day military conflict between Israel and Hamas, the militant group that controls Gaza. Hamas and other groups fired more than 4,300 rockets at Israel, killing 12 people, and Israel bombed and shelled targets in Gaza, killing more than 230.

Arab youths in Lod, a mixed Jewish-Arab city in central Israel, held a protest on May 10 that was broken up by the police with stun grenades and tear gas. Angry Arab youths then went on a rampage in the city, burning synagogues and cars, throwing stones and firing sporadic rounds of gunfire. Gangs of Jewish extremist vigilantes, called in from outside Lod, quickly organized and began setting their own fires.

Spiraling into the worst intercommunal violence Israel has seen in decades, the outburst of assaults, arson and vandalism spread to other mixed cities in northern Israel and the Arab towns of the Galilee, while Bedouin Arabs torched and ambushed Jews’ cars with stones on the roads in the southern Negev desert.

Over several nights, Arab and Jewish gangs sought out targets. Several victims on both sides were beaten unconscious; one Jewish man was badly burned; and at times the unrest turned lethal.

Four Jews are under investigation for fatally shooting an Arab resident of Lod and wounding several others during a riot in a nearby neighborhood. They said they had opened fire in self-defense as a mob rushed toward them, according to court documents. A Jewish man, Yigal Yehoshua, died after Arabs threw a heavy rock that struck him.

The intercommunal clashes have subsided and early Friday, a cease-fire between Israel and Hamas took hold, though tensions are still running high.

On Monday a soldier and a civilian were stabbed and wounded at a light rail station outside the national Police Headquarters in Jerusalem. The police said that border police officers at the scene shot and killed the attacker, a 17-year-old Palestinian.

The headquarters is on a main road that runs between predominantly Jewish West Jerusalem and predominantly Palestinian East Jerusalem, which Israel captured in the 1967 war and later annexed in a move that was not internationally recognized. The attack took place near Sheikh Jarrah, an East Jerusalem neighborhood where the looming eviction of six Palestinian families from homes claimed by Jewish landlords has contributed to the unrest, and where the police continue to disperse sporadic protests.

The police have come in for harsh criticism from both Jewish and Arab witnesses and victims of the mob violence. Many said they had tried to call the police as their properties came under attack during the disturbances but got no response.

Mr. Rosenfeld said that at that time too many incidents were occurring simultaneously and that it was impossible to place an officer by every door.

The government called in hundreds of border police officers from the occupied West Bank to restore order in Lod.

When crime involved only Arab citizens, as both perpetrators and victims, the police showed little interest, said Ms. Touma-Sliman, the lawmaker, adding, “we’ve been pleading for years for them to take action.”

Only now, she said, when the violence affected the Jewish population, were the police talking about gathering video footage from security cameras and using other technological means to locate and identify suspects.

“I have lost confidence in the police,” she said. “They will have to earn it.”

On Monday alone, the police said, they had arrested 74 suspects, including dozens who had thrown stones, fireworks and firebombs and assaulted officers in Jerusalem and Arab-populated areas of central Israel. They said they had also seized illegal weapons, including an M16 assault rifle, and ammunition.

Three Israeli Jews, including a minor, 16, were charged on Monday for what the prosecution called the “attempted terrorist murder” of an Arab Israeli driver in Bat Yam, a Tel Aviv suburb. He was dragged from his car and beaten almost to death at the height of the intercommunal violence.