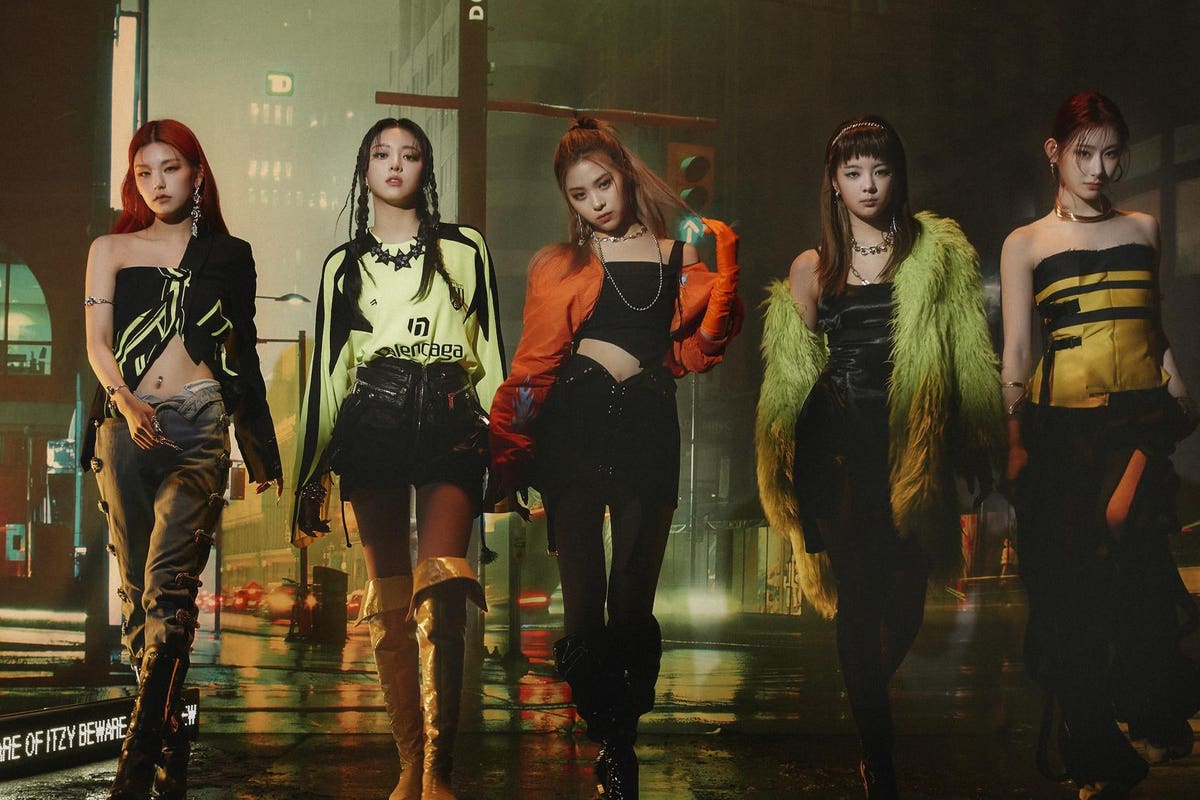 Throughout their bombastic two years on the K-pop scene so far, ITZY has always had a self-declarative narrative in their work with their latest developing them into their most confident, darkest selves yet—and it’s connecting around the world more than ever.

ITZY has claimed a lot through their career: the quintet shouted “I’m different” on debut single “Dalla Dalla,” teased “I’m Icy” on “Icy,” proclaimed “I wanna be me” on “Wannabe,” and reminded us that they’re “not shy, not me” on “Not Shy.” Now, the new album Guess Who has the women dipping into more genres than ever while embracing a slew of characters for the lead single “In the Morning.”

Opening with the sinister hip-hop track “In the Morning,” ITZY kick off their fifth EP with one of their boldest and most experimental sounds yet. With Yeji, Ryujin, Lia, Chaeryeong and Yuna pushing themselves sonically, the track’s quirky-haunting hooks became irresistible to pop listeners, worming their way into another defining anthem for the group. It’s all helped the girl group enter the main Billboard 200 albums charts for the first time and successfully roll out the English version of “In the Morning” two weeks after its original Korean version. It’s all indicating bigger things for the new Maybelline New York spokesmodels

ITZY sat down to talk about the larger visions as they related to the release, as artists with an increasing global focus, and as individuals becoming more confident through their vulnerability. Even when they crack each other up—like when youngest member Yuna declares the group to be “young and powerful”—there is still a sense of proud ownership after ITZY’s body of work has earned them the right to make that such a statement.

Read on for more of ITZY’s reflections on Guess Who, opening up with fans and the larger goals ahead.

Jeff Benjamin: Congratulations on the new album, ITZY! You’ve been so busy even through this pandemic situation. How do you stay connected with fans during this time?

Lia: As you mentioned, we’re actually very busy at the moment because of our album and we’re shooting several other content to get ready for fans. And I think we’re busy because, since it’s the pandemic, there’s really no other way to kind of get to meet our fans, especially our global fans, and it’s been a long time since we’ve met each other. So, we’re going on schedules, filming and posting for fans since there’s really no other way right now.

Jeff Benjamin: This year, and this album in particular, has been prepared on a global scale it feels like. You released your past singles in English, Guess Who came out on the global release day of Friday, I feel like this is ITZY thinking bigger than ever. Is that your mindset? Is it to connect with more fans?

Lia: I think it’s actually part of the first and second question you asked, we’re going more global with this one because of our fans. Our fans are not only Korean, there are lots of global fans. When we look at all the comments, lots of them are in Korean, some in English and lots of them are like other languages too. We really appreciate it and we’re so thankful for all of it. So, that’s why we’ve released the English version for the Not Shy previous album, and that’s why we’re also planning to keep on constantly doing that with this album and beyond. So, of course, we want to go global and worldwide, and that’s because we want to meet fans all over the world.

Jeff Benjamin That’s cool to hear because I listen to this album and think “In the Morning” is such a strong hip-hop track that can appeal to a lot of fans. Can you talk about the inspiration behind it?

Yeji: “In the Morning,” is inspired by the mafia game, the werewolves, where the main character has to hide their emotions and act very differently. The song talks about relating that to capturing someone’s heart. This song is a way for us to show different sides of ourselves. The performance is really something very special like with through this song. So, I really want you to look forward to our performance too.

Lia: It has a strong hip-hop sound to it which makes this one a little bit different than the previous songs too.

Jeff Benjamin: I’m always impressed by all the different styles and vibes you guys do, but this EP has so many influences—I hear hip-hop, pop, and even some country and Latin sounds. Are you enjoying trying out all these styles?

Yuna: Definitely. We are young and powerful—we want to try various styles. So, it’s very exciting. I think we did well. I love the Latin influences on “Wild Wild West.”

Lia: And it was fun while recording the songs. We have so much fun recording.

Jeff Benjamin: Can you tell me your favorite songs?

Lia: Mine is also “Wild Wild West” and “Sorry Not Sorry.”

Jeff Benjamin: I thought “Sorry Not Sorry” might also be the title track when I first heard it. It’s also powerful.

Yuna: So, your favorite is “Sorry Not Sorry?”

Jeff Benjamin: Right now, “Sorry Not Sorry,” but also “In the Morning.”

Yuna: Because I have the starting part of “Sorry Not Sorry.”

Jeff Benjamin: I heard it and I love your confidence. So, that’s your favorite?

Jeff Benjamin: I want to change topics a bit because I thought your “Letters to MIDZY” video was amazing. The way you expressed yourselves was powerful but also relatable and very relevant to what people are going through today. They were “letters” to MIDZY, but did sharing make you feel stronger in any way?

Lia: For me, it did kind of help in a way I think. Because my worry was like about, um, how I feel like I don’t belong on the stage and about like my dancing skills, my singing and everything like self-confidence. But lots of that kind of came from—well, I don’t really listen and read all the comments but even though I don’t really read all of them, I somehow still catch some of them and kind of get hurt by some of them. So, I guess I did and I was in that kind of headspace. But after “Letters to MIDZY” went up, all of the comments, not even only by our fans, but lots of people wrote very long comments telling us to cheer up. So, that actually was a lot of help and it was just very nice to see that lots of people actually cared about us. And cared about each other! Not even cared not about us, but it was nice to see how others can care about others. That really was touching and heartwarming.

Jeff Benjamin: If I can add a personal note, as a journalist who watches a lot of musicians in the pop world, you are an incredible singer and incredible dancer. You don’t need to worry about anything, just keep doing your thing. And Ryujin, I also wanted to highlight how you brought up the double standards female performers face. You made great points in wanting to be seen without prejudice. Have you noticed any progress or changes after bringing this up?

Ryujin: Actually, since I talked about that issue, nothing’s really changed but I didn’t expect something to immediately change when I was talking about that. I just wanted to tell them how I feel about it. I was not that upset by that, but it was freeing to tell them how I feel about their comments because I think those who told us that “You’re a very great performer for a female” is not meant to be a bad thing; that’s just how they think about us. But I just wanted to tell them, “I don’t feel that good when you tell this to us.” So, I was really just saying it to feel better about how I was feeling.

Jeff Benjamin: Looking at those kinds of messages you’ve shared, is there anything else ITZY wants to share more broadly this year?

Chaeryeong: Thank you for waiting for us for so long, to all our fans and the global fans. We prepared a lot and we have lots to show you still, so please keep looking forward to it. Thank you and we love you so much.