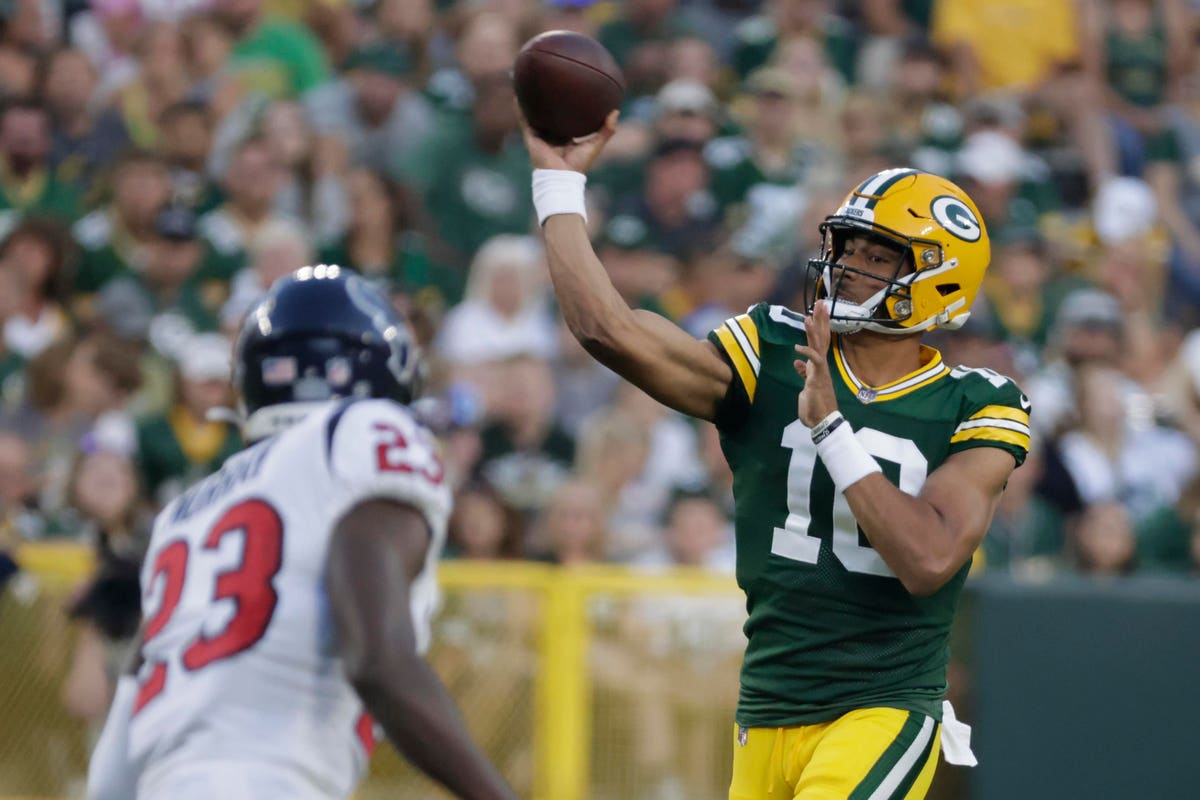 The Houston Texans defeated the Green Bay Packers, 26-7, in the exhibition opener for both teams Saturday. Here are the Packers’ winners and losers.

Love, Green Bay’s first round draft pick in 2020, made his Packer debut Saturday. And playing without his top four receivers and a makeshift offensive line, Love showed why the organization likes him so much.

In the first half, Love completed 12-of-17 passes for 122 yards. Love threw one touchdown, no interceptions and had a passer rating of 110.4.

Love threw a 34-yard dart down the seam to tight end Jace Sternberger. He hooked up with wideout Devin Funchess four times for 44 yards. And he engineered a nine-play, 88-yard touchdown drive against several of Houston’s preferred starters.

“The really nice thing about Jordan is he’s really Steady Eddie,” Packers general manager Brian Gutekunst said of Love last month. “He had a really, really good offseason. We’re really excited. Obviously, he’s going to get a ton of reps over the next month not only in practice but obviously the preseason games, which we weren’t able to do last year. It will be really, really good for him.”

Love hadn’t played in a game since Dec. 20, 2019 when he was at Utah State. All preseason games were canceled last year due to COVID, then Love was inactive for all of Green Bay’s 18 games.

As far as first impressions go, Love’s was awfully impressive.

“This year, obviously, with being the No. 2 on the field, seeing how those gameday decisions go and the communication, he was there,” Gutekunst said of Love. “But it’s a different thing when you’ve got your helmet and you’re one play away from having to go in the game. I think all that’s going to be really important and we’re excited for his growth.”

On Saturday night, the Packers had to excited about what they saw.

Josh Jackson, the Packers’ second round pick in 2018, might be done in Green Bay.

In Green Bay’s final nine games last year, Jackson was inactive four times and played just three total snaps in the other five contests. Then Jackson had an abysmal first half Saturday in which he allowed six receptions for 81 yards and had one pass defensed.

The Packers have terrific depth in the secondary, and by now have likely seen all they need from Jackson.

Funchess finished the night with six catches for 70 yards. He also had two catches for 23 yards — including a beautiful 15-yarder on Green Bay’s first half touchdown drive.

Funchess is on the bubble after playing just one game in 2019, then opting out of the 2020 season due to COVID. Funchess was impressive in Green Bay’s ‘Family Night’ scrimmage on Aug. 7, but hurt himself by using an anti-Asian racial slur in the postgame press conference.

No it wasn’t. But his play Saturday night was more than OK.

The Packers’ special teams have been a disaster the past 16 years.

Rick Gosselin, a Hall of Fame football writer, does an annual breakdown of 22 different special teams categories and compiles league-wide rankings. Since 2005, Green Bay’s average finish has been 24th.

The Packers allowed 18.2 yards per punt return, including a 43-yarder by Desmond King. The Texans also had returns of 20, 16 and 12 yards.

“They’re going to say we’re a good, sound, fundamental and technique unit,” Drayton said shortly after he was promoted. “My background is in education so I’m a teacher. I’ve always believed that coaches have to be good teachers and teachers can be great coaches.”

The fourth-year linebacker is fighting for a roster spot and certainly helped his cause.

Burks, a third-round draft pick in 2018, had a first quarter sack when he timed a blitz perfectly and dumped Davis Mills for a 5-yard loss. Burks also had a team-high seven tackles and two tackles for loss.

“Anytime you can get live reps to continue to perfect your craft is important,” Burks said this week. “I’m going in with the mindset of I’m going to continue to get better every single day, if that’s in practice or the games. The games, you get a chance to showcase what you can do in front of a live audience, so I’m looking forward to the opportunity.”

He took full advantage of that opportunity Saturday.

The Packers never could get their run game going and finished the night with just 49 rushing yards on 21 carries (2.33 average).

No. 3 quarterback Kurt Benkert was credited with a fumble, but rookie running back Kylin Hill never looked for the ball. Hill also finished with minus-2 yards on five carries, while Benkert lost four yards on his two carries.

Green Bay’s longest run of the night came late in the game when Dexter Williams had a 12-yard carry.