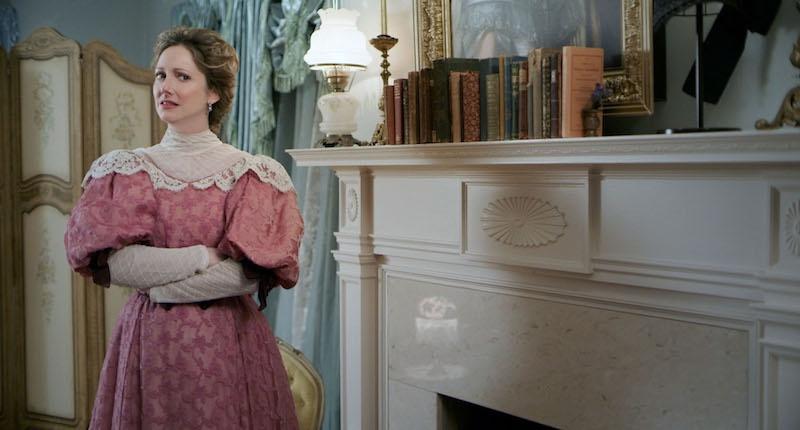 n the small world known as Hollywood, actress Judy Greer met fellow thespian Justin Long on the set of an Apple
commercial they were filming in 2008. Years later, Long invited Greer as a guest on his Life Is Short podcast. Not long after, the popular comic actress received a text from Long inquiring if she’d be interested in starring in a movie he co-wrote and planned to direct with his younger brother, Christian. She agreed to read the script and was delighted to see that a fellow comedienne she admired, Melanie Lynskey, already was onboard. Greer, best known for her comedic roles in film and on TV, Greer eagerly accepted the part of the title character in the risqué buddy comedy Lady Of The Manor, playing the title character, a ghost.

As Elizabeth Wadsworth, she’s a Savannah socialite who died in 1875 under mysterious circumstances and has lurked around her antebellum brick home, Wadsworth Manor, ever since. Nearly a century-and-a-half later, the historic home is operated as tourist attraction by the descendants of her late husband, who remarried and had children. The current heir is Grayson Wadsworth (Patrick Duffy) who plans to turn over the day-to-day operations of the manor to his ne’er-do-well son, Tanner (Ryan Phillippe), while the real caretaking of the estate is managed by Nia (Tamara Austin) and Marcus (Wallace Claude Jean), siblings who are descendants of Elizabeth’s favorite servant.

Tanner hires lovable but perpetually irresponsible Hannah (Lynskey), who’s just gotten kicked out of her apartment by her exasperated boyfriend as she is drowning her sorrows at a local bar. He takes her to dinner and offers her a job as a tour guide at the manor, then invites her over for a quick romp but he passes out on the bed before he can have his way with her. Though Hannah’s now living at the manor, she still manages to show up late for her first day on the job. She bluffs her way through a tour she gives to visitors in period costume as Lady Wadsworth. Her bad behavior riles the real Lady Wadsworth (Greer) who appears as an apparition that only Hannah can see. Thus begins a Pygmalion-like transformation as Elizabeth tries to educate crude, loose, pot-smoking Hannah in the ways of being a refined southern lady and on the real history of Wadsworth Manor. Over time, Hannah manages to convince prim and proper Elizabeth to loosen up, laugh and expel flatus like a modern woman. The plot thickens as a secret will Elizabeth penned before her untimely death resurfaces, bringing into question the true ownership of the manor.

Greer, who is married to Real Time With Bill Maher executive producer Dean E. Johnson, says she is pleased that Lady Of The Manor not only provides comic entertainment, but delivers a solid message about righting history’s wrongs, shedding a light on patriarchal trappings as well as what it means to be a lady, both historically and now. She also stars in Halloween Kills, the latest installment of the successful, long-running horror franchise, opening Oct. 15, after being delayed a year due to the worldwide pandemic that forced movie theaters to shut down.

Lady Of The Manor opens in theaters and will available On Demand and Digital Friday, Sept. 17.

Angela Dawson: How did you get involved with Lady Of The Manor?

Judy Greer: I’d done Justin Long’s podcast and had done a Mac commercial with him years ago so we’d always say “hi” to each other at parties and stuff. I ended up doing his podcast and we had so much fun. We laughed the whole time. Then, out of the blue, he texted me, saying he had this script and Melanie Lynskey was doing it and that I’d be perfect for this role. I read it and thought, “This is totally ridiculous. Who are these people? Of course, I’ll do it.” I’d always wanted to work with Melanie, and with Justin and Christian (Long) directing it, I signed on. Melanie and I had been trying to work together for years so I’m really glad it came together.

Dawson: This is like Pygmalion, except that you’re both trying to change each other. Hannah is trying to make Elizabeth loosen you up and Elizabeth is trying to transform Hannah into a proper lady. Did you know Melanie prior?

Greer: Yes. We’d both been on Two And A Half Men, but we never had scenes together. We knew each other because we came up together (in show business). We’re close to the same age and we went in for the same roles. So, we’d just seen each other at industry events and had known each other for years. I always considered her a friend and wanted to work with her mostly because I wanted to hang out with her. It’s almost impossible to hang out with any actor friends unless you work together because we’re always traveling and busy all the time. So, the best way to hang out with your friends who are actors is to do a project with them.

Dawson: Elizabeth is a 19th century southern belle who is very graceful and proper. She’s also progressive ideologically, leaving the manor to her servant who also is her best friend in her will. Were there downsides to playing this character, though? Were the corsets and hoop skirts a bit uncomfortable?

Greer: I actually like wearing that stuff because it’s like cheating. It gets you into the role. When I’m in a dress like that with a corset and my hair done up, it forces me to sit up straight and walk around straight and be that proper. So, all that stuff I really loved. But also, it was very warm and it was hard to go to the bathroom because there was so much skirt. I remember thinking, “Oh, I’m not going to be drinking much water on set when I’m in this getup.”

Justin and Christian gave me this book that gave me a lot more insight into all the details of life during that time. It was just fun to read about how people kept a home and what their priorities were. It was called The American Woman’s Home by Harriet Beecher Stowe.

Dawson: That’s in the movie. It’s her favorite book where she keeps a copy of her will.

Greer: I haven’t seen the finished cut (of the film) so I wasn’t sure it was in there. There were a bunch of pages highlighted so that was very helpful in creating this character. And just seeing where she lived. This house was her life. It was everything to her. So, being on the set was helpful too. I loved being on the set and I loved the house they chose.

Dawson: Did you film on location in Savannah?

Greer: No, we were actually in Tampa. I don’t know why we shot it there but I really fell in love with the city. I was very happy when the Buccaneers won the Super Bowl. I’d done a movie with John Cena before and he lives in Tampa and was going on and on about it. I was like, “Whatever, dude.” Then, later, of all the random places to shoot a movie, I’m shooting a movie in Tampa. So, when I got there, I was like, “John was right. This place is awesome.”

Dawson: Did you get to keep your portraits that are hung on the walls of the manor in the movie?

Greer: Yes. I do have one of them. I have a smaller one. It was gifted to me in a very ornate gold frame. So, I took down one of the pictures hanging in my house and put it up in its place while my husband was at work. Now, I love my husband, but he’s a boy so he usually doesn’t notice anything. I’ve dyed my hair four different colors and he hasn’t noticed it. But the minute he walked through the door after work, he said, “What’s that?” He’d noticed my portrait hanging under the stairs. So, we kept it up for a while and it was kind of this comedy bit and then I replaced it with the picture that was previously there, and he said to me, “What are you doing? You can’t take (your portrait) down.” So, there it hangs, under the stairs next to a photograph of Orson Welles—that’s the type of Hollywood family we are. I really like having it. I’m not a saver of those types of things but that one makes me happy. Maybe in 25 years I’ll move it to the hall so I can remember when I had no visible pores.

Dawson: Since you play a ghost in this film, I have to ask you if you believe in or have ever seen one yourself?

Greer: I can’t give you a specific example but I do believe in them. I believe there are souls, or energy beings. Just to get completely woo-woo, I just read Signs by Laura Lynne Jackson and she talks about how the universe gives us signs all the time, and you can ask for them. So, that is about as close as I get to believing in ghosts. If someone told me their house was haunted, I would believe them.

Dawson: Speaking of spooks, you return to the Halloween franchise with Halloween Kills, which arrives in theaters next month. Your character, Karen, is back. Laurie (Jamie Lee Curtis) is back. (Director) David Gordon Green is back.

Greer: It’s so exciting. Unfortunately, we couldn’t release this last year when it was supposed to be released. I’m just excited for the world to see it because it’s such an incredible feat what David Gordon Green did and Jamie’s performance in it. It’s more horrific. It’s bigger. It’s faster, more action-packed and angrier. It’s a perfect follow up to (2018’s Halloween). In that one, we were re-introducing people to the conflict that the family faced 40 years ago, and our story was really about family. In this, we really open it up to the community and the trauma the community has experienced. It’s really kick-ass.

I saw it two weeks ago and I was covering my face a lot. It’s very gory. Jamie received the (Golden Lion) lifetime achievement award at the Venice Film Festival and she said this movie feels like we’re going back to John Carpenter’s original vibe. She’s so proud of it; we’re all so proud of it.